Maximizing quality when it comes to bermudagrass hay is all about taking the right steps through the production process.

For Jim Singleton, a producer near Gravette, Ark., the market opportunities available with high-quality hay make the extra steps well worth the time.

He sells about 80% of the hay he harvests from his 100 acres of bermudagrass to area horse owners. He produces about 8,000 small square bales each year and 500 to 700 large round bales. He runs 85 head of commercial beef cows, grazing the bermudagrass in the summer and bermudagrass interseeded with cereal rye in the winter.

START WITH THE SOIL

Bermuda's hunger for nitrogen (N) is well known, but it also relies on other macronutrients and micronutrients.

"If you're taking a lot of hay off a field, you're also pulling a lot of nutrients out of the soil. So frequent soil tests are necessary," says Singleton, who has won the warm-season perennial grass class in years past at the American Forage and Grassland Council National Hay Contest.

On Singleton's farm, potassium is maintained at 300 pounds per acre and phosphorus at a 100-pound minimum. Soil pH stays between 6.0 and 6.5.

The first cutting is the highest producer, so Singleton applies 130 pounds of actual N at green-up, along with 100 pounds of potash. This is about how much potash he estimates he removes annually through hay production. Other nutrients are applied as indicated by a soil test done in late winter.

An additional 75 pounds of N is applied ahead of each subsequent cutting. If there's moisture in the soil, Singleton will put this on within four to five days of cutting. If moisture isn't adequate, he may skip an N application to avoid possible nitrate concentration in hay.

Singleton applies Gramoxone in late March to burn down broadleaf weeds, particularly henbit. If bermuda has broken dormancy, Gramoxone may burn it back but won't have a lasting effect. Ideally, it would be applied a week ahead of green-up. If glyphosate is used, Singleton cautions it needs to be applied before there is any sign of green-up, ideally right after the last frost. Otherwise it will injure the stand.

Under certain conditions (such as a late frost), a second herbicide application may be necessary. In these cases, Singleton prefers Gramoxone because he can apply it later in the season, and it won't kill the bermuda. On the whole, though, he points out a healthy bermuda stand is very competitive and minimizes the need for a lot of ongoing weed controls.

"With good fertility, once it gets going, weeds aren't an issue," the producer says.

The period between cuttings is critical to quality. Singleton says: "In this area, June 1 is an important date. You aim for about 28 days between cuttings. To stay on schedule, you need to be cutting hay about June 1. If the window is longer than 28 days, grass gets too mature. There's a big quality difference between a 28-day interval and a 38-day interval."

That 28-day schedule puts Singleton on schedule for four cuttings. Dry conditions can prevent the fourth one, which is typically the highest in quality and contains up to 20% crude protein.

"Our success depends on rain between July 1 and August 10," he says. "The first two cuttings are fairly stable, but the last two are weather dependent. Even if the hay is poor, it's important to stay on the calendar if at all possible, because that sets you up for the next cutting. Even with some fall rain, we still get good production."

If Singleton is forced to wait 45 days between cuttings and gets just three harvests, he says overall production is close to being the same as if he got four harvests. However, the quality is much lower, as much as 10% lower, depending on variety and conditions.

Singleton uses Greenfield, Midland 99 and Vaughn's #1 for hay production, and Wrangler for grazing. Quality and quantity are often variety dependent.

From Greenfield, for example, he expects 16% protein, 65% total digestible nutrients and a relative feed value score of about 100. Average production is 5.5 tons per acre.

Newer varieties such as Midland 99 and Vaughn's #1 may not have quite the quality scores, but production can reach 8 to 9 tons per acre. Of the three varieties, he says Greenfield is the finest-stemmed, followed by Vaughn's #1 and Midland 99. 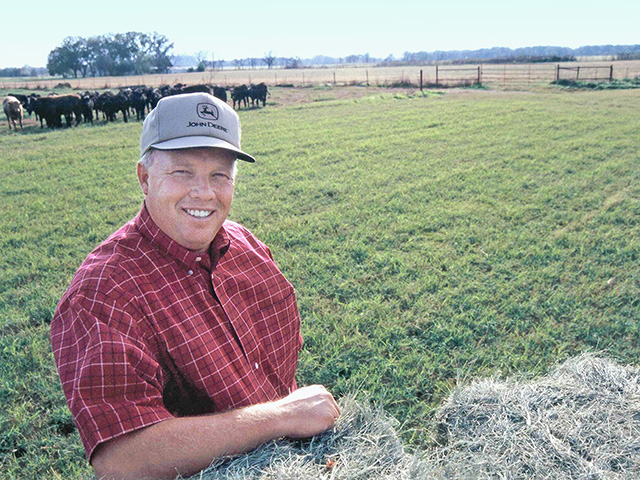