The great social critic and cynic H.L. Mencken once defined "Puritanism" as "the haunting fear that someone, somewhere, may be happy."

Speaking as a life-long Presbyterian and one who's struggled with the upward potential of total depravity, I find myself muttering a regretful "Amen."

Maybe this explains why I'm so bothered by the growing premiums in deferred live cattle futures. For example, the December, February and April contracts are now being celebrated by $8, $11 and $12 over the last established spot cash market. What exactly are these bullish sinners so excited about?

I think it's safe to say these aggressive bets on the far horizon have nothing to do with thoughts of tighter meat supplies. Even the most oblivious vegetarian at the salad bar knows that the stage is set for runaway beef, pork, and poultry production in 2018. If beef and pork tonnage each expands by close to 3%, while chicken and turkey output grows by at least 2%, next year's meat locker will have to find room for an additional 3 billion pounds.

That's not exactly how you spell 'scarcity'.

No, the impressive display of blue-sky confidence we have now before us is essentially anchored by rather bold assumptions regarding the future strength of beef demand. More specifically, I would argue, it nurses heavily on prospects for greater export sales ahead. And the anticipatory suckling in that regard turns dangerously aggressive when it comes to the recently recovered market of China.

Indeed, this goes far in explaining my current worry over the propriety of the cattle board's towering premiums. It's easy to understand how the explosive potential of Chinese beef demand could cause would-be suppliers to overestimate immediate market share (especially those who have been outlawed for more than a decade).

We all know the intoxicating calculus long tied to the market promise of China: population, 1.4 billion; growing middle class, up 5% per annum; current per capita consumption of beef only 12 to 13 pounds, nearly 45 pounds below the U.S. appetite. The international cash register tells the sexy tale. From 2012 to 2016, China spending on beef imports has increased from $275 million to $2.5 billion.

But if that's the undisputable good news, the bad news is that U.S. producers may have quite a wait until the full plate gets passed their way. When the ceremonial deal to reopen trade with China was announced on May 11, the industry justifiably embraced it with much hoopla. Yet, when the USDA announced the finalized export protocols about a month later, cause for celebration was considerably more somber.

Chinese inspectors would be waiting at the docks with quite a laundry list of requirements. While some amount to little more than bureaucratic bookkeeping, at least three provisos strike me as major wet blankets: 1) Cattle must be identifiable in terms of place of birth in the U.S.; 2) Beef must come from cattle 30 months of age or younger; and 3) Restrictions on certain growth-enhancing products and other feed additives.

Unlike our major competitors serving the Pacific Rim, source and age verification is a dance we have not learned. A few lessons have been clocked here and there, and champions of the National Animal Identification System (NAIS) continue to beat lonesome drums. While it's extremely difficult to document, most believe no more than 15-20% of U.S. cattle carry birth certificates that would make them China-ready.

Restrictions on implants and other feed addictive could be even more problematic when it comes to pleasing our new Chinese customers. Now only are such "clean" cattle currently few and far between, any project designed to significantly increase their numbers can only be long-term in nature. First, extreme coordination from ranch to feedlot to packing house would take years to perfect and expand.

Second, the substantial cost of foregoing these proven efficiencies would have to be somehow covered by greater export margins that are equitably distributed across the entire line of beef production.

And when might we expect China's beef buyers to fund these critical changes in U.S. production by paying premium prices? Given the fact that grass-fed beef currently owns most of the Chinese palate, I'm afraid the only hopefully answer to that question is "eventually".

While China has thankfully unlocked its golden doors to U.S. beef, the operative protocols suggest that we could be fighting to work a square peg into a round hole for years to come. It's a point that I hope the chesty defenders of tall cattle premiums at the CME full appreciate. 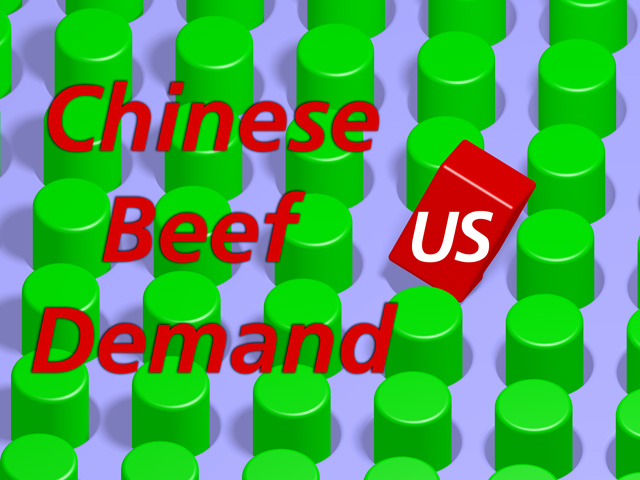