ROCKVILLE, Md. (DTN) -- Harvest is nearing, but the scouting season is far from over.

As the crop dries down, ear and stalk rots are starting to surface in cornfields across the country, plant pathologists warn.

"Whenever we have a stressful growing season, then stalk rots can be an issue," noted Iowa State University Extension plant pathologist Alison Robertson.

The type of weather you had makes a difference. In droughty states like Kansas, growers are starting to see more Aspergillus ear mold than usual. This mold produces a dangerous mycotoxin called aflatoxin, which is toxic to both livestock and humans and must be monitored carefully.

In areas that were wet early on and later turned dry, like Iowa, growers should be more on alert for Diplodia, Fusarium and Gibberella ear rots, as well as Anthracnose and Fusarium stalk rots, Robertson said.

"Pull back husks and look for an olive-green-colored mold," Jardine said. "It can range from the size of the nail on your pinkie finger to covering half the ear. Smaller colonies are more common."

If you find it on more than 3% of the ears scouted, that's a significant infection -- but don't panic.

"Just the presence of mold has no relation to how much aflatoxin might be in the corn," Jardine cautioned. "We've seen years with lots of mold but relatively little aflatoxin and vice versa."

Instead, target those fields for early harvest at higher moisture.

"The drier the corn gets, the more likely infected kernels are to shatter, and shattered kernel fines are where the highest levels of aflatoxins will be," Jardine explained. "If you can harvest at a little higher moisture so you're not damaging kernels as they go through the combine, and then artificially dry the corn down in a grain bin with a dryer, you'll help yourself out."

Elevators will draw samples and will dock and even reject any corn loads with more than 100 parts per billion (ppb) aflatoxin -- the level at which it starts becoming toxic to livestock. However, aflatoxin levels as low as 20 ppb are not safe for dairy cows, which can pass it on through the milk.

For more guidance on aflatoxin levels, see this guide from the National Corn Growers Association: http://bit.ly/….

Weather conditions this fall could affect the levels of aflatoxin found in infected fields, Jardine added. There is evidence that a field that dries down quickly is less likely to accumulate as much aflatoxin compared to one that dries down slowly.

"Research shows that as corn dries down, the longer it is in that 20- to 25%-grain moisture range, that is the time that the fungus is potentially pumping out a maximum amount of aflatoxin," Jardine said.

Infected kernels will also be more likely to have lower test weight and shatter, so adjusting combine settings to maximize grain cleaning would be wise, Jardine added.

Once your corn is in the bin, dry it as quickly as possible to 15% moisture, and dry grain destined for long-term storage to 13% moisture. Ideally, growers should also cool the grain down to 35 to 40 degrees Fahrenheit, which is difficult during warm fall conditions, Jardine conceded. Running dryer fans at night can help.

Any season stressor, such as foliar diseases, too much rain or too little rain, can increase the chances of stalk rot, Robertson warned.

"If the corn plant hasn't been able to photosynthesize efficiently and fill grain, it will start to cannibalize stalk tissue," she explained. "Once it does that, any of the stalk rot pathogens can get in and take advantage of the lowered sugars in the stalk and the fact that the corn plant is more concerned with filling grain than defending itself against pathogens."

Robertson recommends scouting cornfields from the 3/4 milk line to black layer stages. For a good sample, pick a diversity of spots in the fields, from low-lying or light soil types to higher ground and heavier soil types. Aim to give about 100 plants the "push test," she said.

"Push each plant to the 2-o-clock position," she said. "If more than 10% lodge, you might want to schedule harvest earlier for that field."

While you're there, also peel back husks and check for ear molds, which prey on insect- or weather-damaged ears in particular. Reports of Diplodia ear rot, in particular, are becoming increasingly common in states like Illinois.

Diplodia will coat the ear with fuzzy, white mold, starting at the base of the ear. Gibberella is a reddish mold that starts at the tip of the ear, and Fusarium is whitish to pink and can infect any part of the ear.

For help storing grain infected with ear mold, see this guide from the University of Missouri here: http://bit.ly/…. 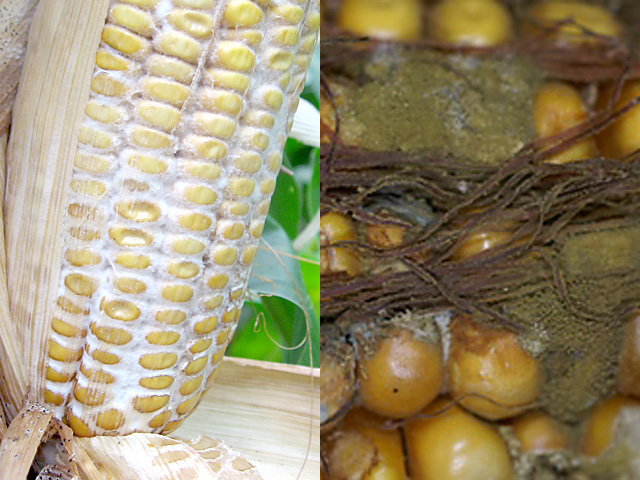