Personally, I find the tail-end of August to be a real bummer.

Sometimes the quicksand of livestock prices sinking deeper and deeper into the third quarter might seem a good candidate to explain my late-summer blues. Without a doubt, pre-Labor Day prospects for cattle and hogs this year look about as promising as a firm of political consultants named "Weiner, Simpson and Scaramucci."

Yet even in those years (actually more common than not) when fed cattle sales have successfully climbed off midsummer lows and have headed toward late-fall highs, I've often struggled with several weeks of mild depression and wistfulness.

Since this dark spell typically evaporates by mid-September or so, I've been fortunate in avoiding the expense of Dr. Freud's couch and truckloads of Prozac. Still, many sleepless nights have come and gone brooding over this seasonal, yet chronic, mood disorder.

Until recently, I was pretty much resigned to accept it all as one of life's many speed bumps, like a bad head cold or a painfully placed pimple. But then I read an article that was nothing short of a cathartic epiphany.

It was about robots that fed cattle. Who knew?

The news story featured a brainstorm thundering across two continents (i.e., from Hanson Silo Company in Lake Lillian, Minnesota, to Trioliet in Holland), roaring in the face of a question older than beefsteak itself: Who will feed the cattle when I have more important things to do (e.g., other farm chores, fighting weather, genuflecting before bankers, family vacations, sleeping)?

Mike Hanson, director of business development for Hanson Silo, explained an ingenious invention right out of "Feeds and Feeding" on one hand and "Frankenstein" on the other:

"The robot is a twin auger mixer that would come under each pre-loaded bin and get the right amount of feed weight on it. The robot then mixes and delivers the feed to the animals in the barn.

"It is equipped with a feed pusher on the bottom and every time it travels the aisle, it pushes feed up to the bunks. Instead of a tractor with a feed wagon driving down the feed alley, followed by a skid loader, it is all done with one robotic unit. One robot can feed up to 700 head of cattle. As long as the bins are full, the robot can be left alone to feed the cattle without human oversight."

And for those scared of being called "lazy" for having a payroll of robots, Hanson quickly notes that the future of livestock feeding goes far beyond the mere saving of human labor:

"There are several benefits, one of the important ones is you can feed 12 times a day. Cattle ruminate better by eating more frequently, thereby balancing the pH in their stomach. University research has indicated that feeding cattle six to nine times a day is optimum.

Multiple feedings reduce the amount of competition at the bunk. The cattle learn more feed will be coming throughout the day. They do not need to be the first ones at the bunk to get the best feed. The robot provides a better feeding system, simultaneously freeing up the farmer to complete other tasks and increasing cattle performance."

By the time I put the magazine down, the reason behind my long psychological struggle with late August suddenly became crystal clear.

As the captive child of a beef-producing family, I never once experienced the joy of a summer vacation. Dad was always too busy and the cattle too hungry. So the waning days of August wired my young brain for disappointment. Not only did they signal yet another wasted opportunity for family recreation, they triggered the painful march back to school where my fellow classmates would torture me with fun-packed tales of Yellowstone Park, Disneyland, Six Flags and Yankee Stadium.

No wonder I'm so messed up. If only Dad could have handed bunk-reading chores off to our workaholic and travel-hating robot.

But enough of my trauma. Actually, I think this story of the R2-D2 cowboys begs a much more interesting question about the accelerating mechanization of agriculture and what it means for the ever-shrinking population and vitality of rural America.

You certainly don't have to look hard for this kind of evidence. Just do a Google search for "agbots" and you'll get over 1.9 million hits. For example, here's just a small handful of stories I've collected this summer of practical plans that will further change just the face of meat processing through the use of robotics:

1. Tyson Foods is exploring the use of robots and automated systems to cut, sort, grade, weigh and load meat as the largest U.S. meat company by sales faces rising labor costs. CEO Tom Hayes tells analysts on the quarterly earnings call that TSN had double-digit increases in labor costs and wages across many operations, but worker availability remains low, and "that's a reason why we are driving hard [toward] automation."

2. Working in the $60 billion U.S. chicken industry is often tough and grueling, with much of the processing done by hand. One of the nation's largest suppliers wants to reduce labor intensity on the production line by introducing robots. Pilgrim's Pride Corp., the second-largest U.S. producer, is adding robotics and X-ray technology for processes such as deboning the front half of the birds, CEO Bill Lovette said on the company's second-quarter earnings conference call.

3. Robots will be used in the Prestage Foods slaughterhouse under construction outside Eagle Grove [Iowa], a company official tells the media, potentially altering the number and use of employees at the plant. "A lot of the precision cutting we are doing is moving towards robotics," CEO Jere Null said. "What would have previously been a laborious, back-breaking-type job like holding a heavy saw and cutting and things like that can now be done by a robot."

I can't help noting the irony loaded in the Prestage comment. After deciding to build a $240 million pork processing plant somewhere in Iowa, Prestage Foods of North Carolina experienced no little trouble in finding a host community altogether willing to welcome and embrace the mixed basket of fruit that typically comes with a packing house.

At one point, Prestage and Mason City seemed to agree on a happy marriage. But moments before the wedding bells were set to peal, city fathers turned the shotgun on the bride and backed her out of the church.

While the economic development committee of Wright County was eventually quite happy to mend Prestage's corporate heart, I'm guessing it finds all this robotic talk just a little discouraging.

Let's face it: The only way any place justifies the resource-taxing ways of a major meat packer is the number of local jobs he creates.

Robots may be incredibly efficient, but they don't build houses, support businesses lining downtown, or give to the United Way.

Although I've limited by comments to the budding impact of robotics on livestock and meat production, readers more widely based will have no problem coming up with examples from all across the ag spectrum. From corn planters with GPS to agbot herbicide sprayers to grains trucks that drive themselves, the human-to-machine ratio seems to be steadily deflating.

Is this good news or bad? Does the irrepressible nature of advancing technology make our answer to that question irrelevant? How are efficiency and happiness related?

I think I'd rather fret over why the family never took a summer vacation. At least that stew-fest was pretty much forgotten soon after Labor Day. 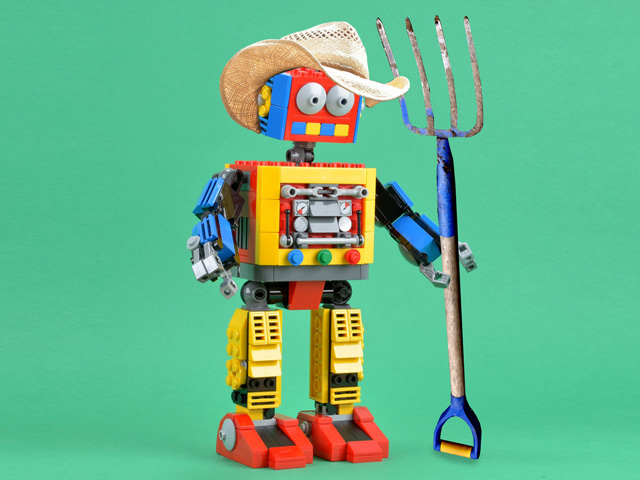