Three years of herd expansion, and the lights have yet to go out on the beef industry's party. Cattle prices have stayed mostly positive moving into the fall, while the market, which has been described as largely "sideways" in nature, continues to surprise at times.

It's all about turnover and demand. Placements in feedlots during May, for example, totaled 2.12 million head, a 12% jump over year-earlier levels. By June, the industry was looking at the largest cattle on feed number since 2007, at 11.096 million head. About half of those placements in May were calves under 800 pounds.

Strong supplies like these could be enough to create a glut, but marketings of fed cattle have mostly kept pace with supply. Mid-year, while 2.12 million head were placed in feedlots, 1.95 million head were marketed—9% above 2016 levels. The numbers reflect a feedlot industry working hard to keep cattle moving.

Derrell Peel, Oklahoma State University beef specialist, described the marketing pace as "aggressive" and attributed a spring rally that took average fed-steer prices to $145 per cwt to their strategy, as well as to exceptional demand.

Lightweight placements in feedlots will change the timing of fed marketings and cattle slaughter for the rest of this year, Peel added. Lighter May placements mean they were not stacked on top of March and April placements.

Still In Production. Concerns that drought-driven cattle sales in the Dakotas and Montana might push placements up and throw the feedlot machine off pace were not considered likely mid-July, Peel said. At that time, USDA estimated about 9% of the U.S. cow herd was located in drought areas.

The worst of those areas, however, included about 7.3% of the national cow herd (2.2 million head). And, 5% (1.6 million head) were in areas categorized as being at D2 (severe drought) and D3 (extreme drought) levels. Peel said these conditions have forced some movement of cattle, but many of those animals were relocated rather than sent to feedyards.

"Liquidation sales by one producer often remained in production for another producer. My sense is the overall net liquidation, or cow slaughter, has been relatively small and won't impact the overall cattle market or trajectory of current herd expansion," Peel predicted.

Asked if producers should wean early this fall, Peel said for those in drought areas, it's a definite consideration and may be necessary to stretch limited forage supplies. Early weaning can help manage drought and preserve the core herd.

CattleFax reported data from summer video sales showed a $4- to $5-per-cwt premium for weaned calves when comparing the same weight classes. While market opportunities and costs of weaning vary by region and producer, the sales data compared dollars per head on a 45-day weaned calf to a calf weaned less than 45 days and one shipped straight off the dam. The calf weaned at 45 days brought $875 per head; the one weaned less than 45 days brought $788 per head; and the one shipped straight off the dam brought $756.

Ethan Oberst, an analyst with CattleFax who reported on the sales, said it's important producers market calves in a way that "highlights the added immunity, the ability to eat out of a bunk and drink from a waterer."

There is also the financial advantage of increased frame size and ability to add weight to the frame. It's important, he emphasized, to be consistent and not try to outguess the market year to year when it comes to whether you should wean.

Buyers aren't just looking for more beef, they are looking for more higher-quality beef. In response to this trend, Walmart started stocking what it describes as "higher-quality" Angus beef in its 4,700 stores nationwide. The store will call its product "Verified Angus." On the whole, retail demand for Choice beef has been so strong, it created a historic price level spread of $30.38 per cwt between Choice and Select beef earlier this summer.

All the good news for domestic beef sales seemed to take a back seat to reports that China officially welcomed U.S. beef back into the country this summer. The move was seen as a huge victory. Last year's value of beef imports by China was reported at $2.5 billion.

While the country's final impact on the 2017 export market is uncertain, four other markets have led the way in beef export growth: Canada, Hong Kong, Japan and South Korea. Exports for 2017 are projected to hit 2.8 billion pounds.

Close said the second half of 2017 won't likely reflect much additional growth in exports when compared to year-earlier levels. But by mid-year, export levels were at 10.7% of beef production, helping prices stay strong. Historically, he noted, exports have never beat 10% on an annual basis.

Prices Holding. USDA price reports for 1,100- to 1,300-pound Choice steers in July showed averages at around $117 per cwt. That's a 2% decline from year-earlier levels.

The positive news won't necessarily translate into stronger prices for cow/calf producers. Close is hesitant to project more than sideways movement given the increased number of cattle in the system and the volume of placements.

"I believe the cast is set for large fed-cattle supplies throughout the rest of the year," he noted. "We've seen a phenomenal job of keeping cattle marketing on a timely basis. It's critical we keep those markets current. A backlog could create a really tough market. The key will be staying timely." 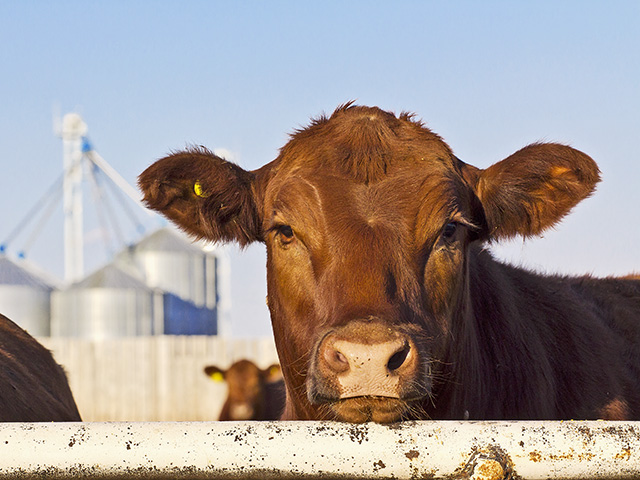