Given the recent scandal of Brazilian bribery, extreme cattle feeding profits, and undeniable fact that my basement is stacked high with Amazon cardboard, maybe it would be best to start out with a strictly worded disclaimer. I have a feeling we would both breathe easier:

"Nothing suggested in the following paragraphs has been prompted by or resulted in any kind of commission, finders-fee, kickback, percentage, gift, cut, grease, oil, juice, airline tickets to Rio, or lifetime Prime membership. Beyond a sincere desire to problem solve for the good of the beef industry as a whole, interpretations of deal-making and undue advocacy are solely the product of the reader."

So, with potential charges of vested interest preemptively closeted, let me quickly state the big question facing this week's column, a thorny and important puzzle prompted by the rising tide of feeder cattle outside of feedlots (i.e., 37 million head as of July 1, 4.5% greater than the last USDA midsummer census taken in 2015) and the expanding need to fund (both in terms of quality and tonnage) foreign demand for U.S. beef.

Forced to divest its global empire of approximately $1.8 billion in assets following participation in a major corruption scandal, related fines imposed by Brazilian courts, and corporate bonds plunging to crippling levels, how successful will JBS be in selling its huge U.S. cattle feeding network known as "Five Rivers?"

Furthermore, what kind of short- and long-term impact will the answer to this question have upon the industry's market health?

Since admiring a problem is always much easier than solving it, I'll start with a little Five Rivers flattery. Five Rivers constitutes a huge cattle feeding complex constituting of 12 feedlots spread over five states and one Canadian province. Actually, JBS has already managed to sell the Canadian facility to Nilsson Brothers Inc. -- the same large beef processor headquartered in Edmonton, Alberta, that sold the Brooks facility to JBS four years earlier -- for approximately $40 million.

Besides the unique size of Five Rivers, its close marketing ties with JBS USA Beef throughout the country is sure to get mention in the sales brochure. Specifically, JBS USA Beef has a supply agreement to buy cattle (presumably via some advantageous formula that incentivizes with premiums) from all of the feedlots. I'm guessing such an agreement could likely continue whenever these yards find new ownership.

In addition to stats concerning feed mills, rolling stock and personnel records, brokers may want to anticipate more philosophical buyers with questions like, "Is this a good time to buy a feedlot?" If you ask me, the only clear and honest answer is "Yes, no and maybe."

On one hand, the expanding cattle herd is beginning to inflate feeder cattle supplies, thereby lending feedlots increasing leverage relative to the management of replacement costs and fed cattle breakevens. On the other hand, rising feedlot equity is no doubt working to raise the cost of cattle feeding infrastructure. On the third hand, major cuts in packing house capacity in recent years could significantly compound the difficulty of marketing more fed steers and heifers through the end of the decade.

Prospective buyers will want to kick plenty of tires and check all the flood plain maps. But of course most of the hard jawin' waits on the far side of the trap door: "How much?" While the seasoned team at Five Rivers have sold enough cattle to know that merchantable inventory must always be priced, I suspect care will be taken not to scare any would-be buyers into the woods.

Over the last year or so, I've seen feedlots sell in a wide range, from $150 to $250 per head of one-time capacity. JBS would probably be quite happy if it could ink a grand bargain in the upper third of that range, banking somewhere between $195 million and $225 million.

If JBS has difficulty finding one deep and willing pocket, it might be forced to pedal the feedlots individually. Because such a "Plan B" will no doubt take more time and probably end up netting less revenue, my gut feeling is that JBS may be willing to take less from someone willing to plate the whole enchilada.

Enter Jeffrey Bezos, or at least somebody with his background, brilliance and billions. Let's be clear, I have absolutely no idea whether the chairman/CEO of Amazon and the second-richest person in America (i.e., with a net worth of $87 billion and change) would have the slightest interest in the cattle feeding game.

Nevertheless, as I consider his amazing resume and accomplishments, it seems like a potential match made in heaven. Just consider the short list of ways Bezos could ride in on a white horse and transform the entire beef industry.

HE'S GOT THE BACKGROUND: Long before Bezos was a computer programmer, international trader and hedge-fund managers, he was raised in New Mexico where he worked on his grandfather's ranch. He is currently the largest landowner in Texas. In short, he has a sense of the country and the fundamentals of production. And, if you're crass enough to call cash in the bank "background," he's got enough to fill the Grand Canyon.

HE'S GOT THE VISION: Even though Bezos did not really surface as a major player until after the dot-com bubble, he has been the Godfather of e-commerce. When it started, Amazon may have only sold paperback books, but today it sells virtually everything. Many market analysts believe it will someday rival the retail power of Walmart itself. Bezos is a guy that aggressively grew Amazon for a solid decade without showing a profit. In 2000, he founded a company named "Blue Origin" dedicated to civilian space travel. Anyone who can envision tourist trips to Mars needs to be in the cattle business.

HE'S GOT THE BUSINESS MODEL: The Amazon juggernaut has progressed on an amazing curve of consumer demand and service. Over the last 20 years plus, Bezos has expanded his business model from cookbooks to groceries to food kits to the recent purchase of Whole Foods. Along with many other interests, he's obviously consumed with reinventing how people eat and spend money.

HE'S GOT THE TECHNOLOGY: Amazon has flooded the market with readers and tablets, and may soon command a fleet of drones capable to deliver the full gamut of consumables and services. And have you met Alexa, the intelligent personal assistant capable of voice interaction, music playback, making to-do lists, setting alarms, streaming podcasts, playing audio books, and providing weather, traffic and news? Every week I receive an e-mail announcing new commands my "chatbot" will respond to. Indeed, if we could only convince Bezos to purchase Five Rivers, cattle feeding would become so much simpler in no time: 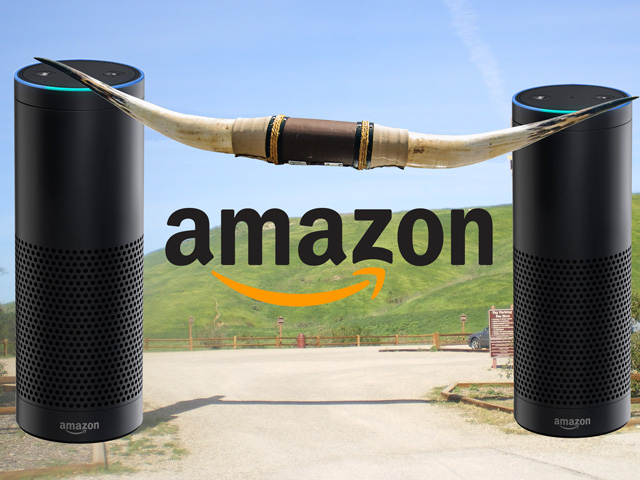