There's no red carpet, but Camp Brisket is about as close to a paparazzi experience as you'll find in College Station, Texas. Tickets to the camp are only available by lottery, making attendees some of the luckiest barbecue enthusiasts in the world.

Why the brisket? Popularity of this cut has grown thanks to a Texas-style approach to cooking that produces a buttery-smoky goodness few can emulate. The camp, started in 2013, offers a chance to learn some of the secrets to a great brisket from the best pit masters in the country.

This is a joining of resources between state rivals Texas A&M and the University of Texas (UT), where Foodways Texas—a group dedicated to supporting the state's food culture—is housed. The camp comes together every January with 60 attendees and a panel of experts who discuss everything from cutting and trimming to whether to wrap a brisket in foil. There's science, lots of opinions and more than a little art to the results.

Jeff Savell is one of the leaders of the program. The Texas A&M University distinguished professor describes the perfect brisket as something that "may be unattainable for most mortals." But he adds the camp experience brings together backyard enthusiasts, restaurateurs and the immortals of the business all consumed with getting as close to perfection as humanly possible.

"It's worth the price of admission just to hear them speak," he says of the lineup. "We have a panel on 'Life as a Pit Master,' and to learn how they got where they are today is fascinating. Some learned from parents or grandparents; some like Aaron Franklin started cooking in his backyard."

Cooking a brisket is a lesson in alchemy. Out of 40 muscles studied on a beef carcass, the brisket is the 39th toughest cut. "To take something so inherently tough and turn it into something so magical … it's no wonder people stand in line to eat brisket and celebrate those who know how to cook it," Savell says.

VIP Speakers. Camp Brisket grew from the successful Barbecue Summer Camp, launched in 2011, as a joint venture of Foodways Texas and Texas A&M University. Robb Walsh, author of "Legends of Texas Barbecue Cookbook," is a key contributor to that camp. Today, Walsh is a presenter at Camp Brisket, along with "Hardcore Carnivore" Jess Pryles, celebrity cook and writer, and Davey Griffin, A&M meat science educator, who speaks on anatomy of a brisket.

A typical Camp Brisket program includes everything from the history of the brisket to beef anatomy, cooking, smoking and how to build a fire. Consistently one of the most popular days is when Davey Griffin has a beef carcass hauled into the classroom and hung. He and Ray Riley, manager of the Rosenthal Meat Center, talk about grading beef and show camp participants how to trim and cut meat. The only thing that compares, Savell says, are taste tests and chuck wagon meals.

Built-in Butter. Savell says they've learned quality really does matter on a brisket. Even though this is a tough cut, top-scoring briskets regularly come from either the Wagyu breed or beef graded Prime—both heavily marbled.

"Obviously, marbling is an important component in the sensory characteristic of beef," Savell says. "Normally, we think about marbling in cuts like the rib eye. Nobody has really studied the role it plays in the brisket, because all these years, it's basically been a throwaway cut. Now that it's so popular, we've seen how important the richness of the fat is. I think of the brisket as a cut with built-in butter."

Restaurateurs seem to agree. Today, some sell brisket for up to $20 a pound. It's expensive, Savell admits, but he insists the time and know-how that go into a superior brisket make it worth the splurge.

"Think about it," he says discussing value of the cut. "This is something that used to be featured at 99 cents per pound. And consider you're getting about a 50% yield on a brisket; so if you start with 15 pounds, by the time you trim and cook it, you have half that."

Asked if there's anything a beef producer can do to make the brisket better or worse, Savell says it's a cut that simply reflects the treatment of the animal as a whole. "The brisket is along for the ride. Anything good for the overall animal is good for the brisket," he explains. "It's amazing anytime you can take a cut that is 3% of the weight of the entire carcass, and people are almost fighting to get into a class to cook it, to celebrate it, to pay tribute to it. That really says something special about our connection to, and our love for, beef." 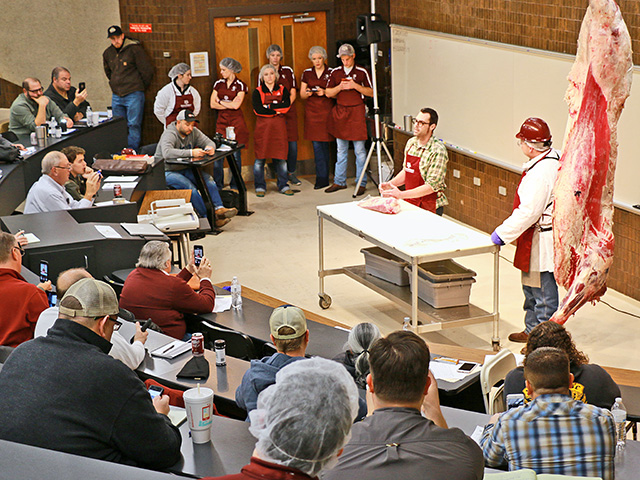