In 1932, Wayne Thomas offered 10 cents an acre to buy 7,500 acres of "tossed-away, cutover land" in the central Florida flatwoods. "Sold," the banker said. "You coulda had it for a nickel," he added.

From wasteland nobody wanted, the ranch sits on some of the most highly sought-after real estate in Florida. "Within a 50-mile circle of our headquarters, there are 8 million people," says Thomas, age 60. And yet, he adds, "You would never know it when you drive onto our ranch."

Each of the Thomas men—Wayne, Robert's father, Robert "Bob" Thomas, and Robert—has done his part to restore the pine forest, return the wildlife, preserve the clean water, stem soil erosion and nurture the improved and native pastures.

At the turn of the 20th century, the area was clear-cut of native yellow pines. Since then, the family has spent generations planting trees to erase that destruction.

Bob Thomas pioneered the practice of contour planting pines around the ranch's wetlands (planting trees following the contour of the land) and was named both Wildlife Conservationist and Tree Farmer of the Year in the 1970s. Under Robert's direction, the ranch earned the National Cattlemen's Beef Association regional Environmental Land Stewardship Award and the Florida Commissioner Agricultural Environmental Leadership Award, among others.

Dearest to Thomas's heart are the livestock. The family runs 2,000 Brahman-influence mama cows. They divide the herd into two main groups, raising replacement females from their maternal herd and weaning as many pounds of beef per calf as possible from their terminal herd.

"Our better calves will wean off at 625 pounds, and we will sell a few loads that average 575," Thomas says. "For the most part, our calves are weaning half of their mother's body weight. We sell our cattle over the Internet to feedlots out west, and we get a lot of people wanting to buy them because of nearly zero death loss, and they know they will grade Choice or Prime."

Always Red. Thomas prefers red hide to black to withstand the heat and humidity. "A red animal, and this goes for our horses, too, is going to be 4 to 6ºF cooler than a black animal. When it's 95ºF, the red cattle will stay much cooler. The reds will be out grazing, and the blacks will be standing in the shade."

Along with color, Thomas is careful to match cow size to the environment. "We want a mature cow to weigh about 1,100 pounds. Bigger cows won't hold up on our sandy soil."

The cows forage most of the year on Pensacola bahia or Argentine bahiagrass along with some bermudagrass. These warm-season grasses die off with frost, so before breeding season, the cows are turned out on "the green stuff" to ensure high conception rates, Thomas explains. The practice of putting cows on winter annual pastures of wheat, rye, oats or ryegrass 30 to 60 days before breeding has paid off. Thomas reports 96% conception rates, far outpacing the state's 72% average.

A Crazy Idea: Water in a Bottle:

While the cow herd is Robert M. Thomas's labor of love, another enterprise on Two Rivers Ranch has far-reaching implications: a spring gushing upwards of 30 million gallons of water a day.

The spring feeds the Hillsborough River, a source of drinking water for the city of Tampa. But 700,000 gallons of spring water also is piped to a plant to produce 5 million bottles of Zephyrhills bottled water per day.

It was in 1989 that the Perrier company came calling on the Thomases wanting to bottle the water rising from the spring on their property. "I called my dad 'Chief,' " Thomas says, recalling the meeting. "Chief looked over at me and said, 'So what do you think?' I said, 'Chief, who's gonna buy water in a bottle when you can drink all you want out of a dang garden hose?' "

But Bob Thomas remembered that when the family went out to dinner, the beverage choice of one of his daughters was always a Perrier. Even though he'd tell her, "You could have a martini for what that water costs," he could see enough of the future in her crystal glass to say yes to the Perrier venture. Perrier was eventually bought by Nestlé, which continues to bottle and market Zephyrhills Brand Natural Spring Water to Floridians. 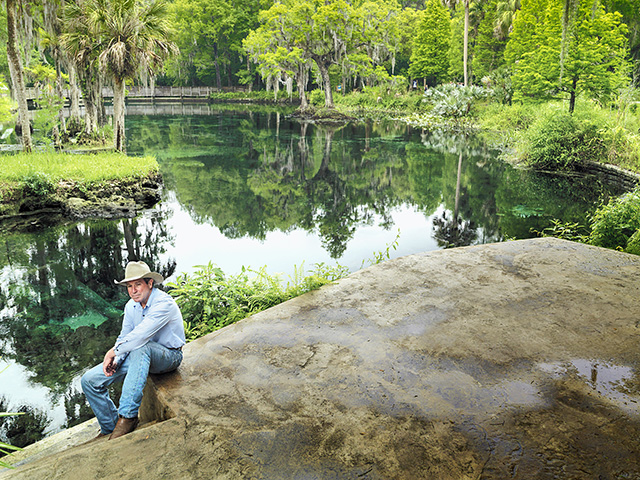