Our newly minted secretary of agriculture loves photo-ops. Ever since he finally received confirmation by the Senate on April 25, Sonny Perdue has been hounded by the farm paparazzi like Beyonce in overalls. Furthermore, the guy never seems to leave Washington without a selfie stick.

While serious deliberation over his ability to manage, police and promote the great issues of agriculture will no doubt stretch over at least the next four years, the jury has quickly returned a verdict on one superficial count: Camera shy, he ain't.

On the other hand, who can blame Perdue for making up for lost time?

First of all, then-President-Elect Donald Trump seemed to forget about the entire ag department for nearly three months. That's a long time for any cabinet wannabe to smile and hold their hand in the air.

And then when Mr. Trump at long last made his eleventh-hour nomination (i.e., Jan. 19, just one day before his own swearing in), Perdue had to brace himself for a protracted confirmation process before the Senate that ultimately lasted another 105 days. Talk about a long way to Tipperary.

So after being trapped in the political wings for months, maybe I should excuse the secretary's opening act if it seems a bit like showboating. Just don't tell James Comey.

Personally, I hope Perdue becomes a department head that's smart enough to remember that he's the messenger and not the message. Given enough time, he'll probably be just fine in that regard. But even if the limelight occasionally proves too irresistible, the new secretary has already said a few things at center stage that strike me as quite friendly in terms of meat market potential.

For example, Perdue announced on May 1 that the USDA "will provide greater flexibility in nutrition requirements for school meal programs in order to make food choices both healthful and appealing to students." Schools that participate in the National School Lunch Program, and as a result are reimbursed by the federal government, have calorie, fat, sodium and other limits.

To start with, this change relaxes the federal rules on whole grains and sodium in 2017-2018. Rules allowing schools to serve 1% flavored milk could be eased sooner.

While I applauded the goals of the Obama administration to improve the nutrition of school children, the restrictive menus required proved counterproductive in at least two ways: 1) their increased cost significantly taxed local school budgets, thereby limited the effectiveness of total expenditures; 2) their lack of taste and appeal caused student participation to seriously drop.

Regarding the latter, you don't have to be a trained nutritionist to know that an untouched plate perfectly balanced in theory still goes for naught. There's a middle ground, to be sure. But this new red tape cutting by Perdue seems to identify an extreme by the food police that needs to be corrected.

But Secretary Perdue has scored another accomplishment in his baby tenure that I find far more significant than tinkering with the school lunch program. Last week, he announced a reorganization of USDA, including the creation of an undersecretary for trade and foreign agricultural affairs position (something provided for in the 2014 farm bill).

In a Wall Street Journal op-ed, "Farmers Know the Benefits of Trade," Secretary Perdue laid out his plans for the reorganization saying, "We're creating a new undersecretary for trade and foreign agricultural affairs, whose focus will be on promoting U.S. food, fiber and fuel around the world. This realignment will help me, as agriculture secretary, to be an unapologetic advocate for American products. My message for farmers is simple: 'You grow it and we'll sell it.'"

Hopefully more than a political flourish, it remains unclear at this point exactly what the duties of the "undersecretary of trade" will entail. I wonder how they might help or hinder newly confirmed U.S. Trade Representative Robert Lighthizer. But while it might take some time for this new bureaucratic piece of the puzzle to find its best fit, I do see it as a valuable and much-need flag raised over the Trump administration that is still soiled in the wake of a hard-hitting campaign fraught with anti-free-trade rhetoric.

Simply put, the future prosperity of the U.S. meat industry lies in the steady growth of foreign demand and exports. This month the World Board once again underscored this reality by initially predicting levels of meat production for 2018: beef, 26.98 billion pounds, up 2%; pork, 26.93 billion pounds, up 3%; chicken, 41.82 billion pounds, up 2%. All three major pistons are in expansion gear, and most analysts are willing to extend that trend through the end of the decade.

The triple-decker meat pizza and the latest gut-busting monstrosities offered up and down the fast-food strip notwithstanding, generally overfed Americans are not likely to consume significantly more beef, pork or chicken on a per capita basis anytime soon. I know that, you know that, and Sonny Perdue knows that.

As long as he uses this knowledge to continually spur the growth of U.S. meat exporters, let him ham into the picture anytime he wants. 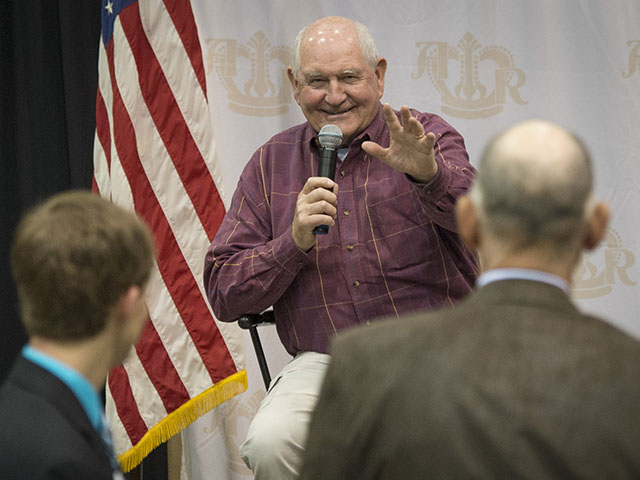