Converting pastures from Kentucky 31 tall fescue to a novel endophyte grass is an expense few operations can justify as markets tighten. On the other hand, fescue toxicosis is a real and costly side of exposure to the forage during certain times of the year.

Dick and Betty Bryan live in Wellston, Oklahoma, a part of the country where, historically speaking, fescue toxicosis has not been much of a concern. But, the changing landscape is bringing a new set of production concerns to ranchers.

The Bryans noticed subtle changes at first. Tall fescue seemed to be encroaching during the last 10 years, crowding out bermudagrass in their owned and rented pastures. There were also changes in their 250-head commercial Angus-cross cow herd.

Betty notes as fescue increased, they began to see fuzzy-hair coats year-round, more foot problems, lower conception rates and even lost tail switches. Their bulls, of which there are 16, were some of the first to show noticeable setbacks, including lost weight.

The producers were concerned their only option to turn back the clock would be a big tank of glyphosate. Then, Betty read about a way to manage tall fescue using a different herbicide that would suppress seed head development in the forage. She was encouraged. Dick was hopeful but frankly felt it was too easy a fix.

Without much to lose, the two decided to try Chaparral on 65 acres last year. The easiest way to judge the outcome of that one application is to report the Bryans will spray more than 200 acres of tall fescue with the herbicide this year.

Betty says conception rates are back to nearly 100% after dropping to 75%. Calves look good, with birthweights between 75 and 100 pounds, weaning weights at 650 pounds.

The Bryans' experience proves tall fescue can be managed, says Scott Flynn, field scientist with Dow AgroSciences. But he notes every scenario is different, and there are some cases where chemical suppression won't be the best option—notably in mixed-clover pastures (where the herbicide will kill the clover) or for those growing forage for hay.

For many cow/calf producers and stockers, though, management through suppression offers a cost-effective option to conversion. It returns money producers are losing to the endophyte in poor herd health, reduced conception and lower gains.

The program is pretty straightforward. Three weeks prior to seed head emergence (up to boot stage), broadcast Chaparral at a rate of 2 ounces per acre. Add 0.25% nonionic surfactant, no additions, no substitutions. This should not be used with other herbicides or on thin stands of fescue. The label allows application of a 28 to 32% solution of urea ammonium nitrate (UAN) at the same time.

Flynn advises producers to treat no more than half of total fescue acres and graze the untreated fescue first until seed heads emerge. Then, rotate cattle to treated fields, which will remain in a high-quality vegetative state throughout the typical summer slump.

According to Chaparral's label, the herbicide also controls a variety of winter annuals, early-season broadleafs and some species that emerge after an application for seed head suppression would be made. Together, these include: buttercup, poison hemlock, biennial musk, bull and plumeless thistle, wild carrot, buckbrush, ragweed, cocklebur, chicory and horsenettle.

It's normal after the Chaparral is applied for fescue to yellow, a condition that can last a couple of weeks. Treated fescue will also look different, with fewer stems and more leaves.

This will not cure or eliminate fescue toxicosis, Flynn explains. Rather, it suppresses seed head growth, which is where the toxic endophyte is found in three times greater concentrations than in the leaf blades. Without seed heads, the overall ergot alkaloid (toxin) loads in cattle from fescue are reduced, nutrition in the forage is maintained at high, vegetative levels, and cattle performance improves. The suppression also supports more forage diversity by reducing competition.

Multiple research trials going back to the early 1990s have documented the negative impacts of endophyte-infected tall fescue on cattle. These include: 15 to 40% reduction in pregnancy rates; 25% reduction in milk production; a 65- to 85-pound decrease in weaning weights; 20% less time spent grazing; 25 to 40% less forage intake; decreased average daily gains (ADGs) of 0.3 to 1.2 pounds; 25% more water use; and a 1 to 4ºF higher body temperature.

Flynn says crude protein levels on Chaparral-treated fescue were 40% higher in June when compared to untreated tall fescue; dry matter digestibility was 11% higher; and water-soluble carbohydrates were 9% higher. Thanks to increased grazing and improved nutrition, stocker steers showed higher ADG on Chaparral-treated tall fescue—2.1 pounds compared to 1.48 pounds. Crude protein on the Chaparral pastures was 14.4%; on the untreated, 11.6%.

For cow/calf producers, cow pregnancy rates showed improvements: 89% on Chaparral-treated fescue pastures compared to 80% on untreated. Average body condition held at 5 to 5.5, and cows weaned heavier calves, on average 17 to 55 pounds more for those in Chaparral pastures, indicating milk production was not an issue.

Cautions And Some History.

University of Missouri forage specialist Craig Roberts says the fight to control seed heads on tall fescue is a long one. Manual controls like clipping or harvesting have been used for generations, and they do work to reduce toxicity of the forage.

About 20 years ago, he recalls some producers were using plant growth regulators labeled for the turf industry to manage tall fescue. Today, it's low-rate herbicide applications that are gaining in popularity, specifically Chaparral, by Dow AgroSciences.

"Here in Missouri, in the middle of the fescue belt, by the first week of May, we are seeing fescue reach boot stage. There is a seed head in the stem, but it has not emerged. Early May through mid-June, it spreads out, and the seeds begin to fill. They fill with the endophyte that is toxic to animals.

"If you can prevent seed head development, you've done quite a bit to prevent toxicity up through about October. So this is a significant thing," he explains.

He adds this may offer a good option for producers who want to convert to novel endophyte fescue. By using the herbicide the season prior to reduce seed heads, producers can cut back the amount of seed forming and dropping into the top half-inch of the soil, nature's seedbank.

Overall, while the specialist says Chaparral is a good tool to reduce toxicity from green up through early October, he stresses it's important to consider a couple of points.

First, Roberts says it's unclear what the impact may be of using the system year after year on the same field. Second, he notes this is not a magic wand that permanently eliminates toxins in fescue.

By October, even with seed head suppression, tall fescue, unless it's a novel endophyte, is absolutely toxic, Roberts says.

"This won't do anything for fall toxicity. October through December, you still have the ergot alkaloids in the base of that plant, and it is toxic. So, yes, it helps in the spring and the summer, but after that, you still have to manage around fescue toxicosis." 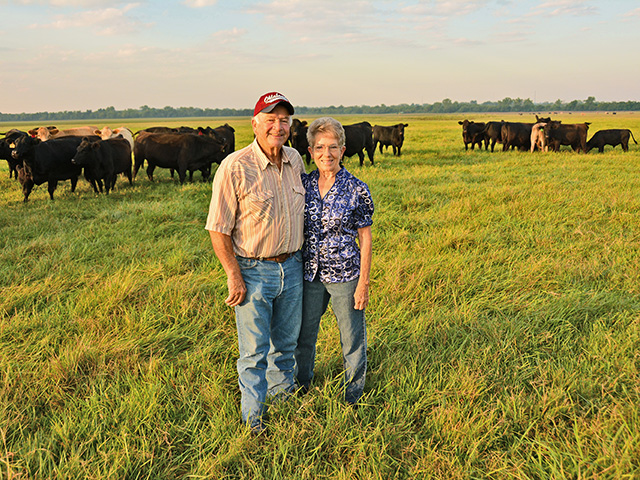