Eight years later, cow numbers are up to 300, preg rates are consistently in the 90s, the breeding season is 63 days and calf values have soared for this Angus-Brangus-Braford commercial crossbred herd.

"The two most critical things we did were to reduce breeding season length and to expose every female to synchronization and artificial insemination [AI]," Lamb says. Those steps, he adds, made practical the selection of replacement heifers based on conception times. Heifers that become pregnant the first 25 days of their first breeding season are keepers.

No More Excuses. With a defined breeding season established, the focus turned to synchronization and AI. Lamb says he's heard every excuse for avoiding these two practices. Worried about complicated synchronization protocols? He says AI techs should prove a big help, even narrowing down bull choices for you. No fancy facilities? Lamb will tell you about 1,700 females in South Dakota AI-bred in three days with portable facilities. Your AI tech or day laborers probably have portable corrals and chutes. Many synchronization protocols take heat detection out of the equation, removing the time and labor obstacle. As for cost, Lamb says synchronization runs around $18 per female. Semen is $16 a head.

Reluctance to AI, Lamb believes, puts America's cattle producers behind the competition. He notes: "We've probably doubled the number of beef cows AI-bred here, but not like other countries. Fifteen million cows are AI-bred in Brazil, more than half the beef cows in the U.S."

Lamb recommends a seven-day CO-Synch + CIDR program. This protocol is commonly used in both beef cows and heifers. With the system, on Day 0, a progesterone controlled intravaginal drug-releasing device (CIDR) is placed and followed by an injection of gonadotropin-releasing hormone (GnRH). Day 7, the CIDR is removed, and a prostaglandin injection is given. About 54 hours later, plus or minus two hours, it's time to inseminate. Turn the cleanup bulls in five days later.

Sync Up. Lamb gives a lot of credit for the NFREC herd's turnaround to the estrus synchronization process. "All we did was based on how to get more cows to calve in the first 30 days of the calving season," he notes. His emphasis on early calving is based on beef cow/calf Standardized Performance Analysis (SPA) data generated from ranchers throughout the U.S.

Stan Bevers, retired Texas A&M AgriLife ag economist, notes: "Many SPA ranches track calving every 21 days for analysis purposes. Based on that data, I do know that herds that calve the majority of their females in the first 21 days of the calving season are the most profitable. The calves that are born earlier are heavier when they're weaned. That's added weight. If 65 to 75% of the calves are born in the first third of the season, the entire group is heavier, and they are more uniform."

Bevers also says heifers born earlier in the calving season have calves earlier. Lamb has seen that in the NFREC herd. Heifers that get pregnant the first 25 days of the breeding season stay in the herd longer, all the way to the seventh calf.

When they first started the herd makeover, Lamb says they kept almost all heifers born to ensure enough became pregnant those first 25 days. Now, they keep 90 potential replacements; of those, 70 to 80 become pregnant in the first 25 days of the breeding season. They need 60 to maintain current herd size, so they have the luxury of selling bred heifers that don't meet their standards for structure, fleshing ability, genetics or disposition.

"Our cow/calf production system has to make money," Lamb stresses. "Now, the herd is paying for itself. It can survive. A lot of that is about getting cows pregnant. 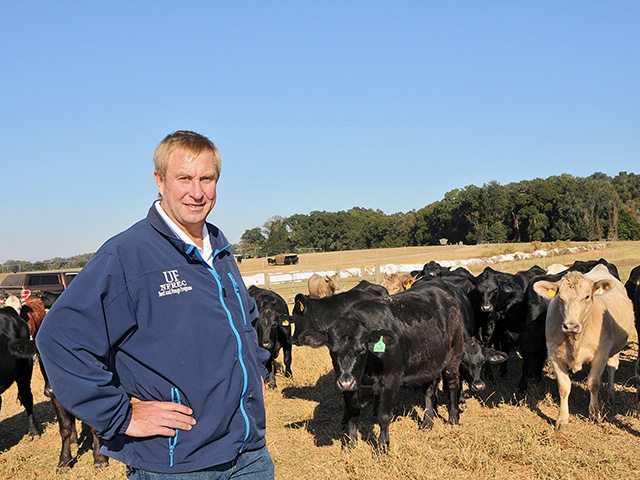