When it comes to contentious U.S. relations with Mexico, Presidents James K. Polk and Donald J. Trump could turn out to be the perfect bookends.

Of course, Polk's responsibility for the Mexican War (1846-1848) has long been a benchmark of American history. On the other hand, it's way too early in the Trump Administration to know if his aggressive saber-rattling will actually trigger a major trade war with our neighbor to the south. Nevertheless, there are certain comparisons between these chief executives and their respective settings that are tantalizing to say the least.

Elected in 1845 by the still-rising tide of Jacksonian democracy (a political and philosophical revolt against the elites and insiders of the day), James Polk romanced the nation with visions of continental expansion, promising to do whatever it took to stretch U.S. boundaries to the Pacific. This was not just a nifty idea. It embodies blueprints pretty much endorsed by the Almighty himself. Manifest Destiny.

Much of the real estate Polk needed to buy, steal or conquer for the project was all too loosely held by the new sovereignty of Mexico (winning independence from Spain in 1821). Indeed, Mexico had attempted to improve its foothold on land north of the Rio Grande by "encouraging immigrants" to settle in the region, often cutting them generous land deals if they promised to practice the Catholic faith, reject slavery and remain loyal to Mexico.

Unfortunately for Mexico, it proves to be yet another example of how dangerous immigrants can be. Eventually, these rowdy misfits became known as Texans, sowing the seeds of big trouble.

In November of 1845, President Polk sent diplomat John Slidell to Mexico City with an offer of $25 million for the Rio Grande border in Texas and Mexico's provinces of Alta California and Santa Fe de Nuevo Mexico. When officers in the chaotic government saw the money as an insulting bribe, Slidell was sent packing.

Polk then ordered General Zachery Taylor to invade disputed territory south of the Nueces River and essentially pick a fight with Mexican forces. When Mexico fired the first shot on this showy parade of bullies, Polk had the perfect excuse to declare war and eventually claim the desired geographical booty.

Fast-forward nearly 170 years and we find ourselves in the middle of another skirmish with Mexico. While no one expects any shots to be fired (if you don't count the border guard), the possible trade war President Trump may be provoking threatens to be extremely bloody for agricultural concerns on both sides of the Rio Grande.

Once again, consequences of immigration partially explain the conflict. To be sure, they compose more of the centerpiece in 2017.

After blaming everything from unemployment to drugs to urban violence on illegal immigrants from Mexico during his presidential campaign, Trump seems to be aggressively moving ahead with plans to build "the Wall" and send the bill south.

Late last month, the president suggested that he would impose a 20% tax on imports from Mexico to pay greater security along the border. Although a White House spokesman quickly clarified that other options were also being considered, the statement served as gas on an already blazing fire.

It didn't take long for Mexican Senator Armando Rios Piter to announce retaliatory plans to introduce a bill in the country's legislature requiring the country to stop importing corn from the United States and instead import it from Argentina or Brazil. The boycott threat sent seed caps spinning from one end of the Corn Belt to the other.

The initial shock value was easy to understand. About 15% of last year's record 15.1 billion bushels of corn produced in the U.S. was exported, and Mexico recently surpassed Japan to become the top buyer. More specifically, close to 28% of U.S. corn exports annually (valued right at $2 billion) is shipped to Mexico. If Mexican buyers would truly pull the plug, the damage to the already feeble domestic cash trade would be crippling.

Yet once U.S. producers and analysts recovered from the initial sucker punch, most agreed that Rios Piter's proposal was probably long on rhetoric and short on serious intent. Even if the senator actually tried to push such a plan into law, its unattractive economic implications would make few friends among Mexican legislators.

For example, a shift in corn sourcing to South America would not be easy or inexpensive for Mexico. U.S. livestock feed is mostly delivered to northern Mexico by rail while product destined for the southern part of the country largely arrives by ship from the Gulf of Mexico. Generally speaking, longer hauls from Brazil and Argentina add 40 cents to 50 cents a bushel to the price Mexican buyers pay for corn.

Beyond the significant hike in feed costs for ongoing cattle and hog operations, banning U.S. corn could seriously compromise major herd expansion projects now on the Mexican drawing board. On one hand, Mexico is expanding its hog herd with some sources projecting a 20% growth in breeding numbers over the next two to three years.

Similarly, Mexico's beef complex is also positioned for substantial growth in the coming years. SuKarne recently opened a new beef complex that includes feedlot capacity of nearly 300,000 head and a beef plant that can process more than 800,000 head annually.

Short of stiff economic sanctions actually imposed by Trump, I can only conclude that Rio Piter's comments now represent little more than angry bluster. Maybe the Mexican lawmaker simply wanted to demonstrate that his side could rant along with the best the White House could offer.

Yet it would be a big mistake to dismiss this controversy as an insignificant war of words, a silly international spat that will harmlessly resolve once the teenagers tire of throwing spit wads. The economic stakes are way too high for the situation not to be closely monitored by politicians, diplomats and commercial interests.

In addition to the corn bond, the agricultural fortunes of the U.S. and Mexico are wedded together in terms of beef and pork.

Mexico also is the second-largest volume market for U.S. beef and third largest in terms of value. Beef exports to Mexico last year increased 7% over 2015 in volume to 242,373 metric tons.

A remarkable second half pushed 2016 pork export volume to Mexico to its fifth consecutive record at 730,316 metric tons, breaking the previous record by 2%. Export value to Mexico totaled $1.36 billion, up 7% year over year and the second highest on record, trailing only the $1.56 billion mark. Overall, Mexico represents our top customer for pork in terms of volume and our second top customer in terms of value.

While President Polk had plenty of critics when he went to war with Mexico in the first half of the 19th century (e.g., Abraham Lincoln called the action "unconstitutional" and Henry David Thoreau decided to be jailed instead of paying taxes in support of the war), his army occupied a good chunk of the far West by the time all the smoke cleared. Is it possible that President Trump somehow envisions a similar risk/reward ratio as he flirts with a trade war in the near future?

Whether you're a history buff or just a nervous marketer of commodities, this question stands to be a real nagger for months to come. 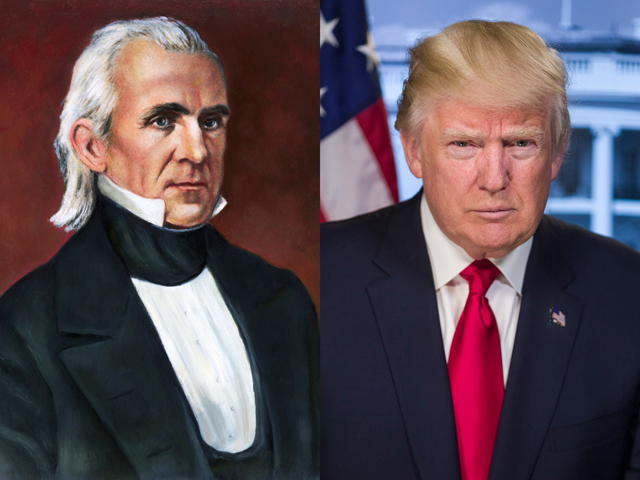