Wooldridge Land & Cattle is assembled among the hills and bottomlands of the Red River valley in Louisiana. Five miles from the Texas border and 15 miles from Arkansas, 500 mama cows graze within sight of a century-old oil field and the first well ever drilled over water. Shreveport, Louisiana is 30 minutes south. In that city of 200,000 Marty Wooldridge hopes to uncover demand for a new business venture.

Marty's operation is primarily a cow/calf operation weaning 600-pound calves. Marty also has long managed a small, word-of-mouth freezer beef business. Twenty fed steers, about 1,100 pounds each, went to a dozen customers in 2016. He sees opportunity to build that modest business into a much larger income stream.

"It is lucrative," Marty says of direct-to-consumer beef sales. He, with his wife, Crystal own and operate Wooldridge Land & Cattle Company. "If the calves have gone cheap, you can hold onto them for another six or seven months. You just can't be tied to one sales point these days," he says.

The potential numbers are eye-catching. Weaned calves are selling for about $700. Assume feed for 150 days beyond weaning costs $500, plus or minus. "The calves are mostly already sold for $2,000 come April 15," he says. "Some people might sell theirs for more. But I try to balance profit potential with a still developing market."

Income diversification is something Marty already does well. Wooldridge Land & Cattle offers bull boarding and weaning services for its neighbors. Marty sells about 1,000 round bales of hay a year and custom bales a few more. He manages 400 acres of pine and hardwoods for commercial sale and sells hunting leases.

"Is it a lot of money per month?" he asks. "Not always. But it is something else to cover the bills until you sell that next load of calves." So follows his notion for the private label beef business.

"Farmers markets have become very popular, but they are geared to produce," Marty explains. "We're starting to see a need, or a want from people who want to buy meat there." Buying a whole or half steer isn't an option for most people. "People living in the cities don't have 14 cubic foot chest style freezers that grandma always had. They have a little bit of freezer space in the kitchen," Marty says. He and Crystal are working toward approval for a state inspected, private label beef business. It would allow them to process and store frozen meat cuts to fill the small freezers of urban customers.

"Crystal and I have a dream of selling Wooldridge Land & Cattle Company branded beef across Louisiana," Marty says. "When I started, I just wanted to have a herd of beautiful cattle. But it's more about that today. It's about throwing a fine tasting, juicy steak on someone's plate."

Their initial goal is to increase production to 50 steers and ultimately to feed out 100 steers a year. "We believe this part of our business holds the greatest potential for growth in the coming years," Marty says.

A fed steer retail opportunity has roots straight back to 1984 and a single Red Brahman heifer—a gift from Marty's grandfather, Buster Gant. Cattle were a sideline business for the Wooldridges then. But that heifer was added to the family's registered Brangus herd, nevertheless.

"We bred her to good bulls each year," Marty says. He kept the heifer calves and his small herd began to grow. By the time he was 20, Marty knew he wanted to be a full-time cattlemen. But he also knew that the family's 150-head "rainbow" herd was not big enough, nor management sophisticated enough for a full-time cattle operation. The family herd was of every make and model. Bulls were left with the cows fulltime. It was always calving season. When the family sold calves in the fall, they were of all sizes.

Marty's had an idea to put his herd on controlled breeding schedule. Enter Joe Reznicek, the now-passed owner of Cow Creek Ranch in Aliceville, Alabama. Reznicek was well known for his trademarked Ultrablack composite breed, 13/16ths Angus and 3/16ths Braham.

Marty soon came to find in Reznicek an always-available mentor. "An old pickup pulls up," Marty recalls of their first meeting, "and a tall gray headed fellow stepped out in a pair of Wrangler jeans and old rough shirt and a broken down felt hat. I had no idea he was the guy who owned the place." He proved to be more than that. "He was out there in the mud with you, he was walking the pens with you. He had this divine interest in seeing other people do well."

Marty described his controlled breeding plan to Reznicek, who suggested two, 60-day breeding periods a year with his Ultrablack bulls. They would produce spring and fall calving seasons.

"I bought into the idea of what it could do for us. It gave us everything we wanted," Marty says. "We've never looked back." Eighty percent of his cows are now bred in the first 30 days of each breeding period records show, producing a tight calving season and a highly uniform calf crop.

"The Farm Bureau network opens doors," Marty says. "It puts us in Washington, D.C. and in our state capital. If we don't take that time ourselves, someone is going to interpret our situation and we'll have to deal with laws and regulations that will affect us everyday."

There is a cost, he admits. But there's a cost also to not being engaged. "I don't remember how the quote goes exactly, but it says if you're not at the table, you're on the menu. That's no truer than it is in agriculture. We have to speak for our cause; we have to tell our own stories." 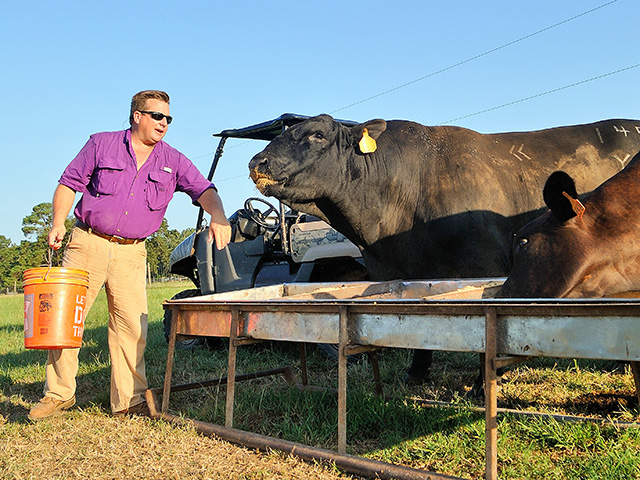