Julie Peterson realizes how little people know about food and agriculture. In 2013, she stumbled across a picture of a banquet table in the middle of an alfalfa field. Peterson says a lightbulb went off in her head: "We could do that on our farm and talk to people in Fargo."

Thus, Banquet in a Field was born. Peterson held the first event at the farm she operates with her husband, Carl, Peterson Farms Seed, in Harwood, North Dakota. She partnered with CommonGround North Dakota, a group of farm women volunteers working to change perceptions about GMOs and conventional-farming practices.

The farm-to-table event brings together 130 guests to talk about food and farming, and enjoy a multicourse meal in a North Dakota field.

Since the state's farmers grow a diverse mix of crops, Peterson explains celebrating that diversity was the perfect way to begin the evening. "We'd heard from non-farmers that when they drove down the highway, they didn't know what crops they were driving by."

The evening begins with a social hour, where guests can visit with a local farmer while exploring 12 crop plots and enjoying appetizers created using each crop. Guests are then seated at designated tables to enjoy dinner and continue conversations about food and agriculture.

Tony and Sarah Nasello, local chefs and food writers, have prepared the meal for the past three years. "The goal is to highlight North Dakota products and help people understand that eating local doesn't necessarily have to mean just produce from your farmers' market," Sarah explains. She adds getting to know farmers has "changed my life in the way I purchase food, economize my budget and the way I look at my food in general."

When the Nasellos partnered with CommonGround North Dakota for the inaugural Banquet in a Field three years ago, Sarah says they knew little about agriculture. "They [CommonGround] were looking for someone outside of agriculture to partner with. We write a food column for our local newspaper, so I think we were a natural choice for them, and, for us, it was a no-brainer."

The interactions of consumers with farmers at the banquet are a key feature of the event. Julie explains, "The event is all about building community and conversation, just one-on-one. We're going to all sit down for a couple hours and talk about food."

Casey Steele, who owns a bakery in Fargo, says Banquet in a Field helped bridge the gap between producers and consumers. "I really like the idea of meeting people that are producing the food, because I think there is quite a distance between the consumer and them," she explains.

Sara Van de Streek, a Fargo resident, enjoyed learning about agriculture. "They were engaging, and everyone we talked to was really open. The venue gives you the opportunity to walk right up and just ask questions," she says.

With many misconceptions about agriculture, Wyman Scheetz, who raises sheep near Center, North Dakota, appreciated the attendees' genuine interest in learning. "They are here because they want to be here, and that's the best part. They want to learn where their food comes from."

Levi Taylor, Ypsilanti, North Dakota, adds, "[The event] really allows people to make the connection so they know their food is actually being produced by other people."

Peterson and CommonGround North Dakota would like to see Banquet in a Field replicated around the country. Pinke says it doesn't have to be extravagant. "You can do this on your own farm and ranch. I don't believe we necessarily need to go viral to affect change, but we do need to put in the effort to have the conversation."

Peterson adds, "It's a lot of work, but farmers want to tell their story, and we have to tell our story if we're going to change perceptions. One conversation at a time, that's the only way we can change attitude and beliefs." 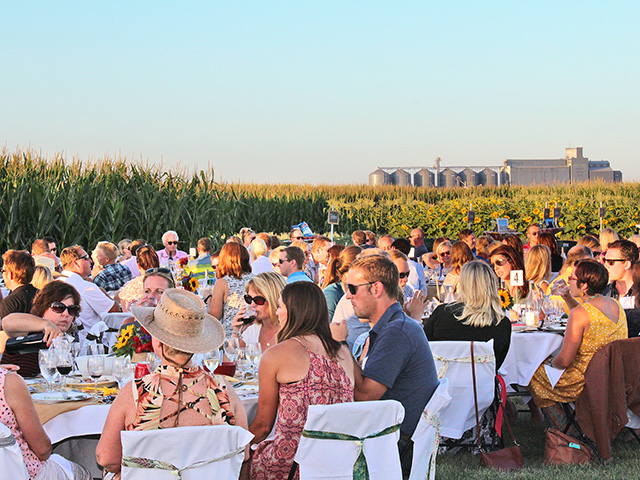