Ask Jake and Carolyn Geis how they met, and the couple laughs. "Once upon a time," Jake begins, pausing dramatically, "there was a bacon-eating contest at the vet school."

"The ladies' division had 3 minutes to eat half a pound of bacon, and in 45 seconds, this pretty brunette girl downed it all, smoking the competition."

"I looked up," Carolyn cuts in, "and no one else was even halfway done."

It was, Jake jokes, clearly dusting off a well-worn line of his: "Love at first bite."

But Carolyn is much more than a bacon aficionado. The husband-and-wife team are part-time farmers and full-time veterinarians at the Tyndall Veterinary Clinic, in Tyndall, South Dakota.

In their spare time -- it's safe to say, not so much during calving season -- the Geises author a website, The Cow Docs (www.thecowdocs.wordpress.com), to relay their experiences of farming, herd health and marrying another vet. From a unique vantage point, the young couple is able to educate an online audience, as well as the farmers and ranchers with whom they interact on a daily basis.

BETTER TOGETHER AS VETS

Carolyn is 28 and a year into the veterinary practice, while 29-year-old Jake has been practicing the past few years. Both felt the pull of their familial roots when choosing a career path. "I wanted to return to a rural area, and I knew that my passion was working with livestock," Jake says. "It was a good fit for me in that aspect."

Carolyn's ambition stemmed from a childhood fear of people; but, she says softly, "Now I use it as an outlet for my talents and to help other people."

The clinic's reach extends from Tyndall, bleeding into western Yankton County and a little of Charles Mix County -- all at the southeastern portion of the state. Jake focuses 80% of his work tending to beef cattle -- half in the clinic, half in the country -- while Carolyn sees about 50% small animals during clinic hours. "We split up calls equally, though," Carolyn says. And during calving season, that after-hours work is touch and go. "I didn't go to bed a few nights ago," she adds.

The couple puts their skills sets to good use. "I studied a lot of the small ruminants -- goats and sheep, and I do surgeries," Carolyn says. Jake enjoys cattle. "Tomorrow," Carolyn adds, wryly, "he gets to spay a dog."

But, she says, "we get to bounce cases off one another."

"We get along all right," Jake adds.

As Educators. Jake and Carolyn began The Cow Docs as an educational tool -- an extension of the skills they've gleaned as vets and in farming. "I've always been a person who feels if you want something to change, you can't wait for someone else to do it," Jake says. Topics they tackle range from how cattle are bought and sold, GMOs and water use to night calls, calving season and working together on the farm and in the clinic. The couple bases blog topics on mainly noncontroversial issues to help build a reader relationship.

"We really like to reach readers a few generations removed from the farm with an interest [in ag] but not a lot of experience or knowledge," Jake says. "I like that group; they don't come in with a lot of really strong biases. They're more interested in learning rather than justifying their own opinions."

"We live about an hour from my folks and about two hours from hers," Jake explains. "And we run cows with both … it gets to be confusing."

Owning and operating cattle gives the Geises real-world experience that helps guide how they work with clients. "In our operations, things don't always go the way you want them to," Jake explains. "It helps us recognize the challenges our clients face."

Conversely, he says as a vet, it's his obligation to be as progressive as possible. As sixth-generation farmers, the Geises take what has worked -- good land stewardship, solid herd management -- and tinker with things that need to be updated. For instance, owning an operation and practicing veterinary medicine has driven home the points of good vaccination and preconditioning programs. "There's so much more evidence-based research now to back up some of these programs," Jake explains. "A lot of times in farming, there's a habit of 'lore' -- people doing things because that's the way they've always done them."

"One of the most widely used old methods during calving season is swinging a calf from the rafters. The old theory was it gets the fluid out of the lungs," Carolyn adds. "Now, we know that's probably more detrimental, and it's better to rub the calves down on the ground."

In general, the couple says, the majority of farmers and ranchers are open to new ways of doing things. "The main convincing factors are: 1) What extra work will I have to do? and 2) What's the reward going to be?" Carolyn says.

"And most things are one change at a time, not a whole overhaul," Jake follows.

When it comes to the rewards of the veterinary profession: "The paycheck," Jake deadpans. And they both laugh. "It's calving season," he adds, by way of explanation.

Carolyn cuts in. "Getting a live calf on the ground is always pretty rewarding, too."

To interact with Jake and Carolyn Geis, and to read their blog, visit www.thecowdocs.wordpress.com, or follow them on Facebook at www.facebook.com/thecowdocs. 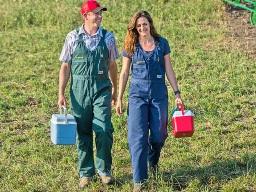