A decrease in forage production was the first clue ‌something was wrong on Roy Stewart's family Hereford ranch.

The ranch dates back to 1898 and is located near the headwaters of the Elkhorn River, outside of Newport, Nebraska. Consisting of 13,000 acres, the operation includes subirrigated meadows and Sandhill summer pastures. Artesian wells provide plentiful water at year-round temperatures of 54 degrees Fahrenheit. It's a piece of paradise for any cattleman, owned and operated by Roy, June, Jay, Kaye, Rachel and Jayden Stewart.

For Roy, the problem with forage production had become a mystery. He had long managed a meadow along 2 miles of the South Fork, on the upper Elkhorn River. Subirrigated by natural streams, the meadow provided hay for the cow/calf herd. He thought the reason for the decreased production might be tied to field hydrology, the movement of water in relation to land. And in this region, it can be complicated.

"While I couldn't be certain what caused this, after evaluating Roy's meadow, I knew the problem was probably the result of changes in the meadow's hydrology," Atkeson says. "That's a common problem in the Sandhills area where Roy's ranch is located."

In some meadows, it makes sense for landowners to drain wet areas off in order to harvest more forage. However, that change can affect water flow into and out of a meadow.

Years ago, a small section of the stream in Roy's meadow had been straightened to provide easier access for haying. Straightening a stream of meandering water causes increased flow and velocity, which can lead to erosion in and around the streambed. As the bed becomes deeper, the stream no longer has access to the natural floodplain, leading to further erosion.

"If a stream has access to the floodplain again, it can subirrigate the meadow and dissipate the energy, causing erosion," Atkeson explains. "However, damming the stream to correct the problem can stop sediment flow and fish passage."

Atkeson believed the best solution was to raise the stream's surface water in order to restore meadow hydrology to its original state. He hoped to reduce sediment transport, provide downstream flood protection and restore historic production of the formerly wet meadows, including returning wetland grass species.

An earth embankment with log riser originally constructed at the stream in 1979 was renovated as part of this project.

"The benefit of an earth embankment for a grade stabilization structure is that it allows for a large step in stream elevation," Atkeson says. This type of embankment can also be used as a stream crossing, is inexpensive to build and allows for water-level control. Sloped weirs used in the project directed water flow to the center of the channel to minimize localized bank erosion.

"The weir allows for sediment transport and some fish passage during high-flow events," Atkeson says.

Rock cross vanes functioned similarly to the sheet pile vortex weir, providing some of the same benefits. They're typically constructed of large rock or boulders. For this project, large concrete waste blocks were used.

The stream's meander was reconstructed to restore channel grade and allow the stream to access the flood plain, basically diverting it back to the old oxbows.

From beginning to end, the restoration took about 10 years. NRCS and Sandhills Task Force programs provided about 80% of the project cost.

It's too soon to say whether the stream restoration was fully successful. It will take several years of monitoring to evaluate. Roy, however, is already seeing increased hay production.

"Before the stream restoration, in some places, the grass was so sparse you could see the sickle mowing the hay," he says. "By summer 2014, we were harvesting 2 tons of hay per acre."

Atkeson would like to see other Sandhill area beef producers evaluate the need for similar wetlands projects in their meadows. Roy knows area ranchers who are watching to see how his meadow progresses.

He notes, however, that with this restoration, some parts of his pastures are now too wet to hay. It's a trade-off Atkeson expected, and one Roy says fits into his overall ranch philosophy.

"When you get down to it, we're raising grass, and our cattle harvest it," he says. "That means we look after both grass and cattle. Dad developed successful conservation practices along with the genetics. That balance is the foundation for our sustainability." 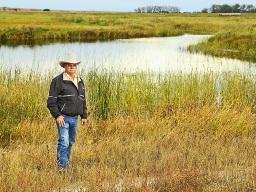