Cody and Deanna Sand changed their ranch management after a financial analyst looked at the year's red ink and concluded they just needed to borrow more money.

That was in 2010, with Cody making custom saddles to supplement ranch income, and Deanna working 60 miles from home. Even with all their long hours and hard work, the business was about $20,000 in the red. Deanna remembers a "look" came across her husband's face when the analyst told them the solution was to borrow more.

"I knew Cody was done. Something was going to change," she says. "When the meeting was over, and the analyst had left, Cody looked at me and said, 'How can we borrow more money and sell the same number of calves next year?'"

Borrowing more while production stayed the same didn't seem like a path to success for the commonsense couple. They had been "traditional ranchers" up to that point. They bought a ranch from Deanna's parents near Forbes, in south-central North Dakota, in 2001 and leased an additional 1,300 acres. They ran three to four commercial herds, averaging more than 300 cows, with little pasture rotation. Heifers calved in March and cows in April. They put up about 3,000 bales of hay in the summer and fed cows all winter. Calves were weaned in the fall and backgrounded prior to selling. Theirs was an all-grass operation with no cropland. And their goal was pretty much the same as everyone they knew in the cattle business: to produce the biggest calves possible. Pounds, tradition dictates, equal profits. But the math had not worked for the Sands.

They began to think unconventionally after Cody met John Lee Njos, a mentor with the North Dakota Grazing Lands Coalition.

"John Lee really opened his eyes to the possibility of managing more holistically," Deanna says of Cody. "We were searching for options, and everything he said just made so much sense. It was really exciting to hear that there is another way, that you can have a ranch and quality of life. It can be easier and a lot of fun."

The couple took a Holistic Management International course in 2011 with Joshua Dukart, a Holistic Management educator in the state. Armed with what they'd learned and a determination for change, the Sands went home and combined all the cows and calves into one herd. The goal was a higher stocking density, longer recovery periods for the land, better residual litter and ultimately more total forage to graze.

If they were successful, they would put up less hay and graze longer, a real leap of faith in North Dakota.

The starting point was 3,000 bales of hay fed per year. They've taken that down to 200 bales and now put cattle out for much of the winter to graze area corn and soybean fields. The winter grazing area is 40 miles away from the ranch and costs them 24 cents per day in rent for 330 cows with calves at their sides -- about $12,000 for the season. They graze for an average of 151 days. When snow/ice demands it, they feed some supplement, usually hay.

To maximize forage use, the Sands added more paddocks to pastures, increasing the number from about 16 to 65. Paddocks range in size from 19 to 50 acres. They increase stocking density at times, when forage production allows, by stringing temporary fencing in those permanent paddocks.

The transition to a grazing-driven operation had its challenges. The Sands recall cows struggled to maintain body condition in the early years, particularly on expired Conservation Reserve Program (CRP) ground. But that was a short-lived setback, as forages improved, and reliance on expensive inputs like hay continued to decrease. An improving mix of forages, including more warm-season tallgrasses and forbs, came in as a result of the new rotation program.

Just as less feed and hay created more profit for the operation, the Sands found more cows producing more calves also added to the bottom line. Just as important, they changed their calving season and got cows and heifers on a schedule that worked better with Mother Nature.

They made calving on June 1, which the couple describes as "calving in sync with nature," a goal. It decreased pressure on cows, reduced winter feeding needs and improved calf health dramatically.

"Instead of looking at how big calves are, you should say, 'How much did you run your cows for last year?'," Cody says now, adding their focus is on net profit across the ranch.

They rely on natural breeding with smaller-framed, thicker bulls aimed at producing easy-fleshing cows. They use a breeding season close to 90 days but hope to shorten that to improve efficiency. Summer-born calves are marketed in the fall at around 450 pounds. Calving in the summer has also helped reduce input costs. Cody says they no longer need windbreaks, calf shelters, straw for bedding, warming boxes, heaters, bagged colostrum or electrolytes -- all vital if you're calving in a blizzard.

Heifers they plan to retain stay with dams through the winter and then move into the herd, which is growing due to the increased grazing capacity.

The lesson the Sands say they learned is a simple one. Their goal of trying to grow bigger calves was costing them more than it was worth. Thanks to their changes, Cody and Deanna now both work full-time at home on the ranch, they owe nothing more than a land payment and say calving season is a joy instead of a struggle.

A classic comparison of old versus new management can be seen on the 1,300 acres of leased land Cody and Deanna Sand bought in 2013.

The landowner capped their stocking rate at 180 pairs for five months. This required a limited rotation. After they bought the property in 2013, the Sands subdivided with electric fencing and holistically planned grazing and management. The first summer, they more than doubled the effective stocking rate (grazing days achieved per acre).

Under the old program, they ran 180 pairs for 152 days, achieving 38,304 total grazing days by Cody's calculation. When divided by 1,300 acres, he calculates this simply as 29 grazing days per acre.

Under holistically planned grazing, they ran the entire herd through the property, using 1,026 acres and getting 64,904 total grazing days, for 63 grazing days per acre. Remaining acres were stockpiled for spring grazing.

The monetary value of this is tremendous, Cody says. The old stocking rate could not pay for the land; the new stocking rate can, with land values of approximately $1,000 per acre.

"Is that kind of change worth a million dollars to you?" Cody asks. 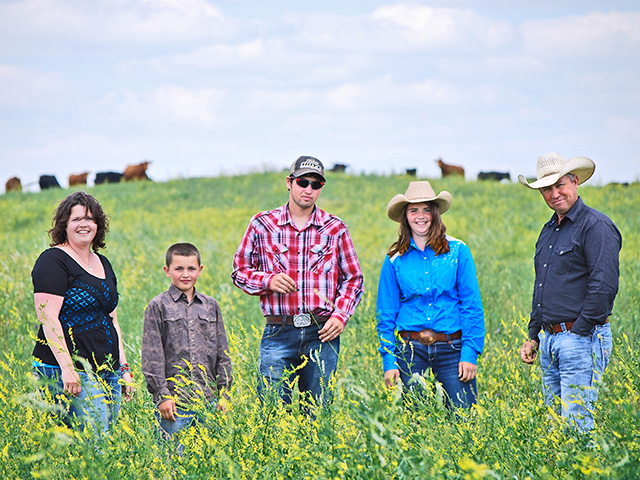