Judging by the hollering, bellering and fence-walking that occurs, weaning definitely rates as the most stressful time in a calf's life. It's expensive, too, and not just because of busted fences and bent gates.

When calves are stressed, there's a hormonal reaction that leads to higher levels of cortisol, also known as the stress hormone. That cortisol can actually keep vaccines from working as well as they should. Stressed calves also don't want to eat, leading to more immune failures.

"We need to prevent anything that keeps that calf from getting nutrients into his body," says Warren Rusche, South Dakota State University cow/calf field specialist. "Stress leads to disease. Disease leads to losses."

"We bring the cows and calves in to weigh them, then sort them into adjoining pastures," she says.

The cows and calves in ABAC's spring-calving herd, based at Tifton, Georgia, can still see, hear and smell each other, but the hog wire fence separating them keeps calves from nursing. Calves have feedbunks in their bermuda- and bahiagrass pastures where they get a mix of pelleted corn gluten and soybean hulls, along with high-quality, homegrown alfalfa and bermudagrass haylage.

The diet meets all the requirements for a good weaning ration; it's nutrient dense, palatable and digestible. Corn gluten is a great source of protein and energy, with around 25% crude protein and 80% total digestible nutrients (TDN). Soy hulls are an excellent source of digestible fiber, with a neutral detergent fiber (NDF) of 67, crude protein of 12% and TDN of 78%. The alfalfa/bermudagrass haylage runs around 180 on Relative Forage Quality (RFQ). At current prices, the half-and-half pellet mix costs around $160 a ton.

"They'll eat more the first day because they don't realize their mamas aren't right there," says Doug Hicks, Mary Ellen's husband and head of ABAC's beef unit. "The second day they want to stand around and holler. Then, they start picking back up. By the time we ship them, they are eating at least 5 pounds per head per day."

The college retains ownership on calves, and after a 45- to 60-day preconditioning period, they ship to Iowa as part of the Georgia Beef Challenge. Once there, feedlot performance is documented, and carcass data collected. A good weaning program, focused on minimal stress, helps ensure performance levels are as good as they can be.

Fenceline weaning doesn't work for every operation. Lynda Stuart, at Stuart Land and Cattle Company, in Rosedale, Virginia, says they have too many miles of fence to make the approach practical. But, she still wants to minimize stress during weaning. Her choice for the job are plastic weaners that slip on a calf's nose. The weaners allow calves to eat, drink and be with their dams, but they can't easily nurse.

"Three weeks before weaning, we work calves and give them the first round of vaccinations. We put in the weaners then," Stuart explains. "It takes 30 seconds to put one in and about the same to take it out."

She says they remove the weaners when they bring the calves back in to sort them off and give them booster vaccinations. This is usually around 7 months of age.

"At that point, the calves are satisfied, but the mamas still miss their babies," she says. "We keep them near the weaning pens for a couple of days after we sort then open a gate and move them to fresh grass."

Weaners cost around $1.75 to $2.25 each and are reusable. Stuart says she's only had to buy them twice in the 11 years she's been using them. She believes they've been money well spent.

"I believe it affects feed efficiency, and I'm on the side of the fence that believes it ultimately affects carcass quality," she says.

TRADITION FOR A REASON

Scotty Lovett used fenceline weaning for four years, but with 350 cows in five herds and one central working facility, it wasn't a good fit.

"Weaning took a month by the time we weaned each herd, they calmed down, we moved them out then brought in the next herd," he says. The extra time and labor made it rough on Lovett and his family since they row-crop farm, too.

Weaning fall-born calves happens in June at the Cuthbert, Georgia, operation. When Lovett fenceline-weaned, calves had to stay in the corral while cows were in the adjoining pasture. The producer could lose calves because of complications from heat and dust.

Now, he separates cows and calves, vaccinates the calves and preg-checks the cows. Cows move back to their home farm, and the calves are turned out on fresh pasture the same day.

"You have to have an electric fence, and we occasionally have one get out, but it works good," he says. "The calves go straight to the shade when we turn them out." He adds he has rarely had a death loss or illness using this approach.

Lovett feeds a total mixed ration of homegrown peanut hay and ground corn, as well as purchased soy hull pellets. The ration averages around 10% crude protein and 62% TDN, and costs around $1.18 per head per day. In addition, calves get free-choice minerals and benefit from grazing bahia- and bermudagrass pastures.

When he gets them back up in four weeks for booster vaccinations, he sorts steers into a heavy group and a light group, and heifers into replacement and feeder groups. This saves him from sorting the animals in August when sale videos are made.

"A lot of cow/calf producers are intimidated by weaning," South Dakota's Rusche says.

"We had a 1,000-head backgrounding lot at home, so I'm not one of them. If you are set up to do fenceline weaning, there is probably less stress, but I'm more concerned with timely weaning and getting good-quality nutrients in them."

He emphasizes the importance of working with a nutritionist to set up a diet and recommends one made up of 50 to 75% concentrate, 12 to 14% crude protein and 46 to 56% NEg (net energy for gain).

"Have a good set of facilities. Don't put them in a mud pen. Do a really good job of low-stress handling when you're hauling, sorting and working them, and make sure you observe Beef Quality Assurance protocols when you're giving vaccinations," Rusche advises. 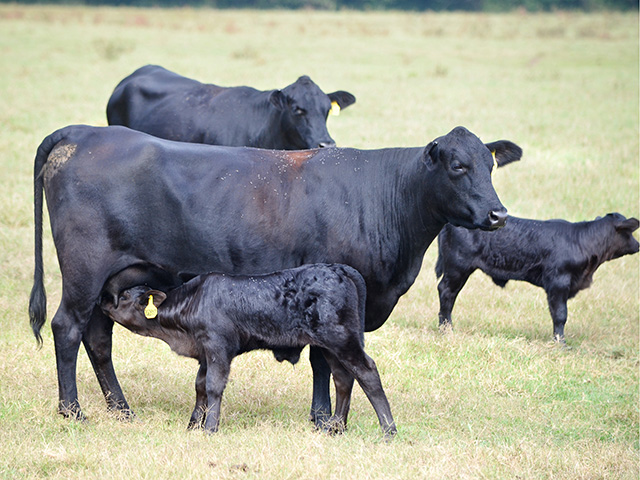