A technology once limited to the research lab is ‌moving mainstream. Just a few cells off a ‌bovine embryo can tell a producer not only its genetic makeup and sex, but whether it will be the right fit for a particular breeder's program.

This process uses genomic amplification, a way of multiplying DNA cellular information, to generate a genomic profile. Recently brought into commercial use, amplification allows use of a cellular sample so small it's less likely to affect the viability of a frozen embryo.

The idea that someone could genetically test an embryo, place that same embryo in a recip cow and see a successful pregnancy started out as a dream for Kansas farm boy Matt Barten. While the process had been documented in research literature, there were barriers to taking it outside of the lab and making it a repeatable and reliable tool for the cattle industry.

"A lot of people said you can't do it yet," says Barten, who has a degree in animal science from Fort Hays State University, in Hays, Kansas. "Then I met the folks at GeneSeek, and they were willing, through research and development, to try to make this work."

It was 2015 when Barten says he got an embryo DNA sample "clean enough to amplify" for a genomic profile. From there, Embruon was born, a Salina, Kansas, company that founder Barten defines as a "true start-up business." Its beginnings go back to Barten's work with John Hasler, a PhD in the field of reproductive technology with Vetoquinol USA, an animal pharmaceutical company based in Colorado.

Barten's interest in pursuing full genomic profiles on cattle started as a challenge and became a passion.

"It's hard to say why," he explains. "I started doing ultrasounds, that led to fetal sexing and then to bovine embryo transfer work. Then you take another step and another. I like challenges."

Barten stresses Embruon has been dependent on teamwork and input from others to find solutions and make the process come together. He works closely with embryo transfer (ET) practitioner and veterinarian Glenn Engelland, owner of Sun Valley Embryo Transfer, in central Kansas. The process they've developed utilizes technology created for human embryos from in vitro fertilization. Embruon's bovine embryo samples go to Neogen's GeneSeek, and within two weeks, Barten will have the embryo's genomic data. GeneSeek provides DNA-testing services to cattle and other livestock producers. Eventually, it is hoped all of the genetic information from these embryos will become part of breed-association databases. Initially, Barten says the American Angus Association is the first to commit to an embryo registry.

The process of embryo genotyping isn't perfect, nor is it without risk. Barten says once an embryo has been biopsied, there is about a 10% pregnancy loss. On the positive side, an operation using embryo genotyping could see tremendous savings in the number of recip cows, or surrogates, needed.

Those recip cows, Barten believes, are probably the most important link in the chain.

"A lot of times, we've found success in the process largely rests on that recipient animal," he says. "The person managing a recip herd can put it in a good place or a bad place for this to work. It's true, we are adding a variable, but it isn't nearly as big a variable as we see when we look at the condition of different recip animals across different operations."

The three words Barten uses to describe poor recips: "old, obstinate and obese." When it comes to cattle temperament, he comes by his knowledge firsthand. Barten grew up on a cow/calf ranch near Abilene.

It's important to note that not every embryo can be biopsied. There are different quality grades for embryos, and if it's not a "Grade 1," Barten says it probably won't accept a biopsy and freezing. Quality grades for bovine embryos range from a Grade 1, considered excellent, to a Grade 4, dead or degenerating. Grade is assigned based on several criteria, including variation in cell size, shape and color, or texture of the fluid within cell walls.

A biopsy from an embryo will yield an amazing amount of genetic information, which allows for sorting and could create market opportunities. Think of it like being able to look through a sale catalog and select bulls based on genomically enhanced expected progeny differences (GE-EPDs).

"The seedstock guy will be able to do that with their embryo inventory," Barten predicts. "He can say genomically, this is where he wants to go with his herd and then use those embryos that best fit that program."

Unused embryos, once genotyped, can be marketed to other producers where the genetic traits are a better fit. An embryo registry is already in the works at the American Angus Association, after the board of directors agreed to implement a process to provide GE-EPDs on embryos, updated and published weekly.

Dan Moser, president of Angus Genetics Inc., expects programming will be in place to provide this information in early 2017. "We will receive results and incorporate those into our genetic evaluation program so our members can get EPDs on embryos," he says.

"The uptake of genomic testing among Angus breeders is phenomenal," he adds. Moser says the volume of genetic testing is now more than 30% of registrations, up from less than 5% five years ago.

At this point, it's estimated an embryo biopsy and genotyping will cost around $150. Barten's Embruon biopsies the embryo, and GeneSeek does the genotyping.

The estimate doesn't include those processes that take place at the ranch and are common in any embryo-transfer program. While prices vary widely, minimum costs of $300 per pregnancy have been reported by ET technicians, which likely won't include semen or synchronization of donor cows. The added cost to genotype the embryo is not expected to dissuade those interested in using this new technology.

Stewart Bauck, general manager at GeneSeek, says it's phenomenal to see this technology move out of a research setting and into a commercial application.

"This is really being driven by three things," he believes. "You have someone like Matt Barten and Embruon interested in exploiting the technology for their customer; you have a partnership with GeneSeek, which has the expertise to be able to genotype the embryos; and you have this realization on the part of producers that genomic technologies are real and predictive.

"It's amazing to realize you can evaluate an animal, even at its youngest state just after conception, and the prediction is an accurate and reliable measure of that animal's true genetic merit," Bauck says.

Embruon will be the first point of contact for producers interested in genotyping embryos. Samples will go from there to GeneSeek, where the DNA can be amplified and genotyped, and a data set created.

Bauck says the willingness of breed associations to work with both GeneSeek and Embruon on this process has been key. He adds the adoption of genetic testing among producers is nothing short of phenomenal.

"In the seedstock sector, when we are talking about things like parentage, defect testing or horn/poll, I would argue there isn't a producer in North America who hasn't, at one time or another in the last two years, used one or more of those services," he says. "If you ask me how many take that next step to GE-EPDs and make selections based on that, it's probably between 25 and 50%, and growing every year."

Just because a technology is available, does it mean there's a cost benefit for every producer who uses it? Dorian Garrick says probably not but emphasizes genetic testing has the potential to positively affect all cattle producers, regardless of where they fall in the production chain.

Garrick, professor of animal science at Iowa State University, specializes in genetic improvement and genomic prediction. He says even if commercial cattle operators aren't using genomics, they have much to gain from the use of these tools at the seedstock level.

"In terms of a value proposition, if a breeder can make faster genetic progress, then all of his buyers benefit from that," Garrick says. "There is a multiplication effect for every investment a breeder makes, and it benefits all the calves born to all the commercial clients of that breeder."

At the commercial level, Garrick believes there is less flow-through benefit from genetic testing. Even where a producer sells replacement heifers, he says the goal of genetic testing is most often for that producer to identify and keep the best heifers.

Asked about the economics of genotyping embryos, Garrick says the industry needs more time to see where the cost-benefit line falls.

"This will be so dependent on a producer's individual operation and goals. If, for example, you have access to a huge number of surrogates, you can put all the embryos you flush in and test those calves when they are born. If, however, surrogates, or recips, are in short supply, and you genotype and implant only those you are interested in, does that offset the cost of additional surrogates? You have to factor in embryo loss and the cost of the testing. It's going to be an operation-by-operation decision."

Garrick adds this technology is developing so rapidly that whatever you can say about it today may be out of date six months from now. "For example, what happens when we can see genotype results in real time instead of two weeks?" he asks. "This is a field that is advancing at such a rate, it's amazing. There's opportunity here, but producers have to look at their own cost-benefit projections."

Embruon's Barten agrees and says as this area of technology moves forward, it's important to note no one person is doing it all.

"This whole thing is bigger than any one person. It's certainly a lot bigger than Matt Barten," Barten says. "I have been blessed by the people I've crossed paths with. This would have taken a lot longer without all the right people coming together. You are only as good as the people around you."

Ultimately, he says, it's the commitment to the process and a willingness to try something new that is moving cattle genetics ahead at such a rapid rate.

"If you don't try something because you're afraid you'll fail, you'll never get anywhere, and you won't raise the bar. There is something to be said for a company or an individual who will try something with a risk and stick with it." 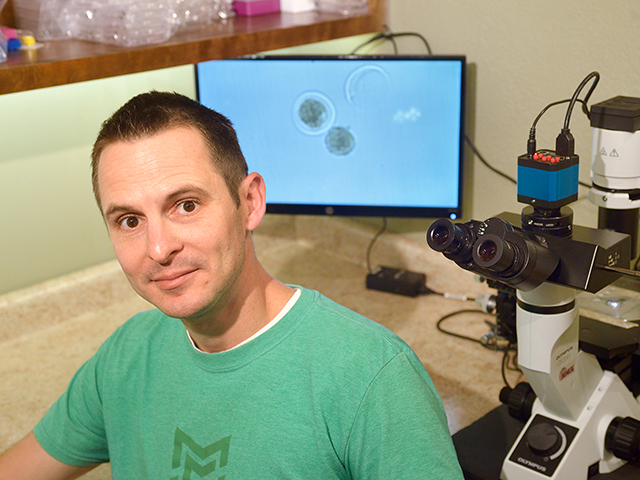