OMAHA (DTN) -- The Canadian Food Inspection Agency has announced more than 35 premises in Alberta and Saskatchewan are under investigation and movement controls in connection to a bovine tuberculosis case from late September.

CFIA stated that, as of Nov. 23, there have been six confirmed cases of bovine TB, including the original cow from Alberta that was confirmed with the disease by USDA when the cow was slaughtered in the U.S. CFIA's has been investigating the case and others, and is working with provincial agriculture and health authorities.

"So far, all confirmed cases are from the one infected herd which is located on three premises. All adult animals from this herd have been tested and the removal and humane destruction of these animals is continuing," CFIA said in a press release. "There are currently over 35 premises under quarantine and movement controls: most of these are located in Alberta, with fewer than five located in Saskatchewan. These numbers will change as the investigation continues."

CFIA added that the strain of TB identified in the first confirmed case is closely related to a strain originating from cattle in Central Mexico in 1997.

"We recognize that the quarantines and movement controls are having a significant impact on producers, especially those that planned on fall sales of their animals," acknowledged Canada's Chief Veterinary Officer Dr. Harpreet Kochhar Nov. 3.

"The CFIA will pay compensation to producers as quickly as possible for any animals ordered destroyed. Producers may be eligible for assistance for expenses not covered by the CFIA's compensation authority from other programs involving Agriculture and Agri-Food Canada and Alberta Agriculture and Forests," Kochhar said at that time. (See http://bit.ly/…)

Ranchers and farmers affected by the quarantines are using much stronger language to describe what they are going through and to express their concerns and frustration.

"This truly was a disaster, and the way in which the quarantine was handled made the process even more devastating. The lack of communication and concern for us as ranchers running a business is totally lacking," said rancher Alberta Ross White when he testified Nov. 22 to the House of Commons standing agriculture committee, according to CBC.

Rancher Brad Osadczuk's ranch in southeast Alberta was where the first diseased cow originated, and the five other positive TB cases have been linked to that cow. He told the committee the quarantine is pushing his ranch even further into debt since CFIA started investigating Sept. 22. CFIA pays for animals it kills, but not for other costs such as feed during the extra months a premise may be under quarantine. Osadczuk is unable to move or sell his cattle.

"So we owe the bank hundreds of thousands of dollars, and we go, 'Oh, hey, by the way, we need a couple hundred thousand dollars for feed for some cows that are, in the end, going to die," Osadczuk told the committee, reported CBC.

Osadczuk and other ranchers are concerned that potential buyers will avoid purchasing their cattle even if the cattle are released from quarantine, leading to more financial hardship.

In Alberta, the investigation on domestic livestock (not wildlife at this time) includes: Newell County, Special Area No. 2, Special Area No. 3, Acadia No. 34 and Cypress County (north of Medicine Hat). In Saskatchewan, it includes Rural Municipalities south of the South Saskatchewan River and west of Highway 4.

CFIA inspectors are doing on-farm testing and tracing potentially exposed animals. The agency said extra staff has been brought in to help with the investigation.

"As this investigation involves a significant number of herds and requires the tracing of the movement of animals for the past five years plus testing, it is not expected to be completed for several months," the agency said Nov. 23.

"Only premises that have been placed under quarantine by the CFIA are prevented from moving animals without permission. Producers in the general investigation area that have not been contacted by the CFIA are allowed to move animals (including sending cattle to auction markets and feedlots) but must comply with livestock identification requirements," the agency said on its website.

Quarantines will be in effect until all susceptible animals have tested negative for the disease, and CFIA is providing information on why quarantines are necessary and can last a long time. (See http://bit.ly/…)

CFIA is also stressing that the TB cases are not endangering food safety.

"The increase in the number of infected animals has no effect on food safety. This is because all animals are examined for signs of disease at slaughter. Any animal which show signs of disease, like the lesions associated with tuberculosis, is condemned and meat from that animal will not be sold for human consumption. The practice of conducting a post-mortem examination on each animal slaughtered has been standard in Canada since the 1930s and is not a new measure applied in light of the recently discovered cases of tuberculosis in Alberta," CFIA stated in an update released Nov. 18. 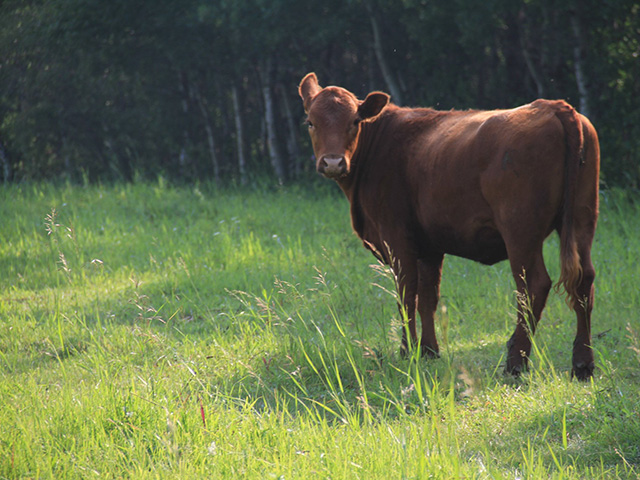 About the Author
Connect with Elaine:
@elaineshein