David Niemi can remember a time when he didn't have to worry much about coyotes preying on his livestock. A rancher in the northwest corner of South Dakota in Harding County, he runs about 1,300 ewes on 19,000 acres.

"We had very good coyote control until the ban of Compound 1080 [a metabolic poison] in the 1970s," he said. "Since then, coyotes have come back, and their numbers have stayed high."

Use of the product is currently authorized only in predator-control collars provided through the USDA Animal and Plant Health Inspection Service (APHIS) Wildlife Services program, but only in Arizona, Idaho, Montana, New Mexico, South Dakota, Texas, Utah and Wyoming.

Coyotes that attack sheep wearing a predator-control collar receive a lethal dose of Compound 1080 and die within hours. The collar takes advantage of the way coyotes kill. Typically, they kill their prey by biting them under the neck, crushing the trachea and causing suffocation. The lethal collar is held in place by Velcro strips under the throat and behind the jaw of the animal targeted by coyotes.

Keith Fisk, wildlife damage program coordinator with South Dakota Game, Fish and Parks, said he can't provide an estimate of how many coyotes roam the state. "Not many states have those numbers," he said. "That's a really hard figure to come by."

It's much easier to count dead coyotes; Wildlife Services counted more than 75,000 in 2013.

Historically, coyotes ranged in western North America and the Central Plains, but today, their range covers the entire continental United States, including Alaska, Canada, Mexico and parts of Central America. Their ever-increasing numbers are largely due to the near decimation of North America's wolf populations, eliminating coyotes' main competitor. And these days, it's not just ranchers and farmers who face coyote depredations. They can be found in cities, as well, being opportunistic carnivores that will prey on anything from lambs to domestic cats.

In 2014, Fisk said his office verified $350,000 in losses related to coyotes, though he added the reported losses amounted to several million dollars. "Often, coyotes drag lambs away, and we can't find them," he explained.

Niemi knows all about that. There were years when he lost 15% of his livestock to coyote predation. "I had neighbors who had to go out of business," he remarked.

The two species have been bred for centuries as guard animals. "The dogs stay with the sheep all the time," Niemi said. "They have a natural instinct to guard, and they migrate with the sheep."

Typically, Niemi's sheep are divided into three to four different flocks in different pastures, each attended by a pair of guard dogs. "We have feeding facilities for the dogs next to water facilities and use weatherproof dog feeders that hold 40 pounds of food," he explained. The dogs, though certainly not cheap to feed or care for, have been life-changing for Niemi's ranch, literally.

Niemi and his neighboring ranchers also take advantage of the Game, Fish and Parks' state trapper, who will trap or snare problem coyotes. Wildlife Services also operates an aircraft out of Spearfish, South Dakota, used to hunt coyotes from the air. Niemi said sheep producers pay 50 cents a head per year through their real estate taxes to cover the cost of coyote control by helicopter.

However, Niemi is worried that a recent federal court ruling in Nevada suspending aerial predator control by Wildlife Services will be replicated in other states. "We can't live without aerial predator control," he said. A conservationist group known as WildEarth Guardians launched the suit, claiming USDA's data on predator depredations is outdated.

This suit has come at a time when Fisk said he's actually seeing an increase in requests for predator-control services. He said two-thirds of his department's work occurs west of the Missouri River, where lamb and sheep operations dominate.

South Dakota livestock producers have the right to kill coyotes themselves. "They're listed as a predator-varmint here," Fisk said. But most predations occur at night or when livestock is in distant pastures.

Tobi Kosanke owns a 78-acre farm near Hempstead, Texas, operating most of it as a livestock sanctuary. She said the coyotes in Waller County are so bold that she's actually seen them come up in the middle of the day and grab a chicken. "We were decimated," she said. "We'd see and hear coyotes every night."

Kosanke eventually acquired some livestock guardian dogs (LGDs) and hasn't lost any animals since. But she cautions would-be owners of LGDs: "They do their job, but they're a handful. You have to train them unless you're lucky enough to get a working pair, and it's time-consuming work. They're very, very headstrong; they are not pets." Plus, she said, they're not perfect and have been known to accidentally kill animals because they play with them too aggressively.

However, before you invest in any strategy for predator control, Fisk said it's a good idea to contact your state's wildlife department for advice. A wildlife damage specialist will visit your property and make an assessment of what you can do to control predation on your stock. There are 27 such specialists in South Dakota, for example.

"Last year, we worked with just under 1,000 landowners and spent three-quarters of a million dollars on coyote control," he said.

The old adage "an ounce of prevention is worth a pound of cure" does hold some weight when it comes to coyotes. Vigilance on the part of producers is key, said Keith Fisk, Wildlife Damage Program Coordinator with South Dakota Game, Fish and Parks. What follows are some of his suggestions.

1. Evaluate your husbandry practices. "You should be out there counting your animals," he said. "If you're not keeping close tabs, you can lose 20 to 30 animals before you know there is a problem."

2. Keep carcass piles far away from lambing and calving areas, or have a rendering service pick up dead animals.

4. Keep animals that are lambing or calving in a corral with the lights on them.

5. Keep young animals out of problem areas. Likely you already know where you have the biggest coyote problems.

7. Sodium cyanide devices can be effective, but you should only use them in large, sprawling areas where they're unlikely to attract domestic pets.

8. Even a good woven wire fence can act as a deterrent. Just make sure you monitor it for places where a predator could crawl through. 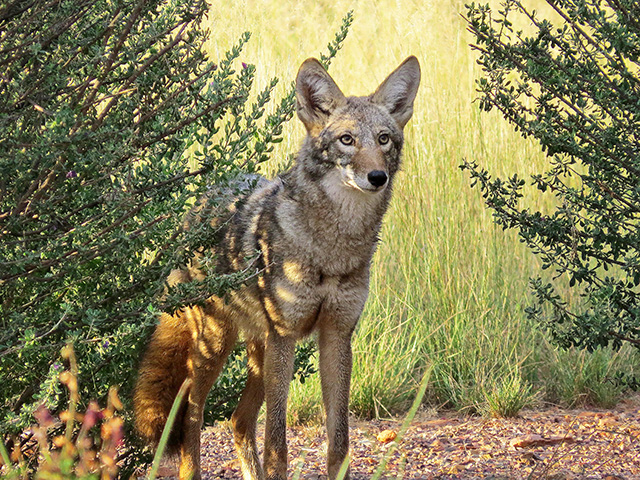