As the cattle industry registered record calf prices in 2014, many feedlot operators were seeing something else climb -- death losses. Despite better products to treat bovine respiratory disease (BRD), it was not uncommon to hear of percentages of calves lost to the illness doubling.

Nebraska's Craig Uden reported on the trend in 2014 when he spoke at the Bovine Respiratory Disease Symposium, in Denver, Colorado.

"We can't afford to have this as an issue. It seems to me everyone is concentrating on the feedlot level to handle the BRD issue. I think it needs to start at the cow/calf level. Treating cattle at the feedlot level for BRD is reactive. We need to be proactive," said Uden, who runs 1,400 cows in his own herd across Nebraska.

In the U.S. beef industry, BRD is reported to cost $643 million in death losses and treatment expenses. Prior to weaning, the highest incidence is seen in steer calves between 90 and 120 days of age. Dollars lost to BRD in calves before weaning is estimated at more than $144 each annually, not including labor or prevention costs. That figure, veterinarian David Smith said, emphasizes this is not a problem that impacts just one segment of the industry.

Smith, the veterinary epidemiologist at Mississippi State University, described BRD in terms of being two syndromes of preweaning pneumonia. One occurs in calves less than 60 days of age. In this case, often the calf isn't getting enough volume or quality of colostrum from its dam. That results in a weaker immune system, opening the calf up to illness.

The other syndrome occurs between 90 and 150 days of age, when rapid outbreaks involving larger numbers of calves occur.

"By the time a calf is 90 days old, their maternal antibodies are gone. In calving systems where they are all born within 60 days of each other, they are losing that protection at about the same time. So the whole group is suddenly susceptible, and the illness spreads rapidly," Smith explained. "We call this loss of herd immunity."

What can cow/calf producers do to avoid the problem? Smith said being proactive means finding ways to get ahead of the loss of immunity.

1. Adequate Colostrum. Before you can protect immunity, make sure it exists. Newborn calves should get up and start nursing within the first two hours of birth. By the time a calf is 12 hours old, its ability to absorb antibodies from colostrum has already been reduced by half. Pay special attention to the calves of 2-year-olds, because heifer dams are more prone to have reduced or lower quality colostrum. These females are also more likely to have had a difficult birth and are less knowledgeable about mothering the calf.

2. Vaccinate at 30 days. Aim for the 30-day mark to vaccinate calves the first time against respiratory illnesses. The goal is to stimulate immunity while the calf still has maternal antibodies present. These maternal antibodies last no more than 90 days, and it takes about 30 days for a vaccine to stimulate immunity in the calf's own system. As for which vaccination protocol to use, it's best to consult with your herd veterinarian.

3. Second Round at 75. Revaccinate against respiratory illness again when calves average 75 days of age. If calves are going to be commingled later, consider putting those groups together by this time, so pathogens are shared while calves still have some protection from maternal antibodies.

4. Management Risks. Smith said one of the confusing things about BRD is it seems to happen more often in well-managed herds.

"It's a disease facilitated by good management," he said. Smith explained, for example, that a producer with a well-defined calving season may use an estrus synchronization program requiring cows to be rounded up and calves sorted off. Not only would this stress calves, but it would likely put them into close proximity with each other, potentially resulting in more illness. The same can be said of intensive grazing programs.

Smith isn't advocating that any of these practices change but rather that producers realize they are creating additional health risks and prepare calves for that time with a strong vaccination program.

5. Genetic Solutions. Is there a genetic component to BRD? Ongoing research is working to identify genetic markers that can create resistance to the disease, and Smith said he believes those efforts will eventually be successful. He pointed out producers can already cull based on a cow's production history. Smith suggested keeping track of which cows have calves that get sick and consider culling them from the herd. He also said male calves are more susceptible to BRD, as are spring-born calves. As for why, Smith said the questions are being asked, but there are not enough definitive answers yet to make recommendations.

6. Consider Early Weaning. One management approach that may lessen BRD cases in young calves is early weaning. Smith pointed to the swine industry where early weaning has been shown to be of value in reducing illnesses.

"Producers now wean baby pigs while they are still protected by maternal antibodies," he said. "The same can work in calves. We often see less sickness when we wean calves at a younger age, probably because the mixing and stress occur while calves are still protected by maternal antibodies." He refers to an age range of anywhere from 2 to 4 months old for this practice.

7. Operation-Specific Plans. Every cattle operation is different, and for those experiencing issues with BRD in young calves, Smith said a lot of good can come from getting an experienced veterinarian to look over the program. He said implementation of Veterinary Feed Directive regulations, which will require producers to have an established relationship with a veterinarian (Veterinarian-Client-Patient Relationship), may shine the light on some practices that are making it harder to keep BRD at bay.

"I do think it's possible, as we move forward, not only will producers see improvement in the area of reproduction, but they may find that they were missing out on some good advice with regard to preventing BRD in their herds by working more closely with their veterinarians."

8. Nutrition Matters. An effective immune response, both in adults and calves, is tied closely to nutrition. Smith said there is a known positive immune response that comes with having adequate levels of copper, selenium and Vitamin E. Anything that can boost the immune response will also boost a calf's ability to fight pathogens.

Bovine respiratory disease (BRD) is an umbrella term for respiratory illnesses in cattle that can be caused by a lot of different factors.

In young calves, BRD is often called "preweaning pneumonia." In older calves, it is known by many as "shipping fever," associated with the time in a calf's life when it is shipped from its home pasture to a stocker or feedyard.

Episodes common to an outbreak of BRD include those that occur in times of stress: weaning, transport, commingling, crowding, inclement weather, dust and inadequate ventilation. 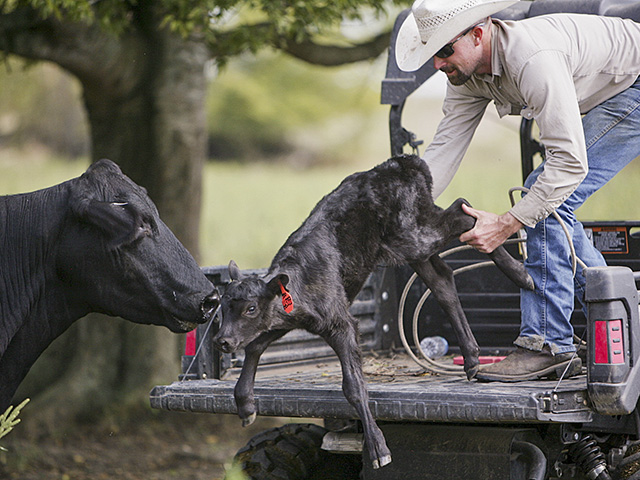