The U.S. is expecting a large corn crop, projected as high as 15.09 billion bushels, and the 2016 wheat crop yields have been at or near record levels in several wheat classes. However, Alltech mycotoxin expert Dr. Max Hawkins has a warning: Quantity should not distract producers from being vigilant regarding quality and the potential for mycotoxin risk.

Hawkins notes the spring wheat harvest across the northern Great Plains experienced wet weather, which led to increased crop stress and Fusariumhead blight. Likewise, much of the U.S. Corn Belt experienced above average temperatures and moisture through August, creating the right environment for mold and subsequent mycotoxin issues.

Alltech recently collected more than 100 TMR samples from the U.S. and analyzed them to determine mycotoxin presence and growth through the storage months. The 37+ analysis tests for over 37 individual mycotoxins shows the risk mycotoxins in stored crops may pose to herd health and performance in coming months.

The toxicity of Fusaric Acid is significantly enhanced when feed is co-contaminated with type B trichothecene or DON. Together, the mycotoxins present in the sample group had a risk equivalent quantity (REQ) of 187 for beef cattle and 211 for dairy cows. For the dairy cows, this level of risk could represent a 0.5-liter loss in milk production per cow per day.

Derek Wawack, a member of the Alltech Mycotoxin Management team in Wisconsin, noted that he has been fielding an increasing number of calls, emails and texts about fungal infections.

"Within just the last couple weeks, these fungal infections have really started to show as the summer has progressed," said Wawack. "Stress from dry to overly-wet conditions, then cooler weather, has allowed these molds to begin growing on the ears."

Wawack recommends carrying out a 37+ analysis early, even on fresh crop, if possible, and monitoring throughout feed out to stay ahead of any major problems.

"Years where we have seen high levels of both Fusarium and Penicillium in the field have typically led to high mycotoxin levels in storage," continued Wawack.

"The results have been drastic production losses, loose manure, edema, bloat, conception problems, abortions, bloodshot eyes, bleeding from the ears and nasal passages and even high mortality rates, along with false positive antibiotic tests within milk from the Penicillium mold." 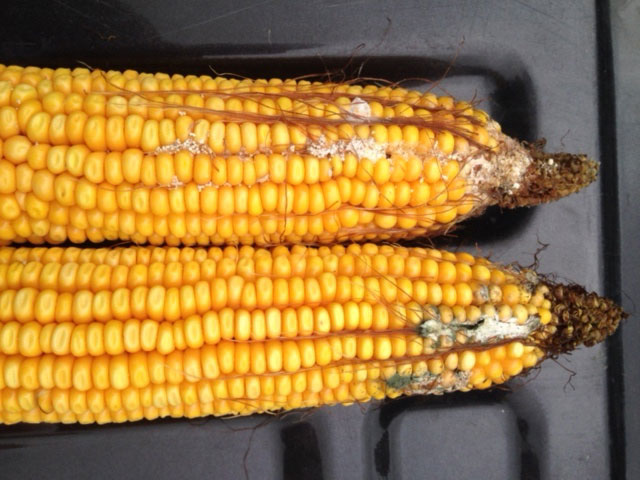