Frederick County, Virginia, is known for its orchard culture, and with the summer and fall fruit harvests, visitors stop by the many roadside stands to buy freshly picked apples, peaches and pears. But few around these environs are quite as diverse or established as Richard's Fruit Market.

Proprietor Eddie Richard and his family raise 15 varieties of apples, as well as peaches, pumpkins and tomatoes, on a 200-acre farm that has been in the family four generations.

"It's been my goal to grow your entire meal here in one place," Richard said. Richard's Fruit Market was, in fact, the first market in the region to offer individually packaged freezer beef.

It hasn't always been that way. Until 1953, the family practiced conventional agriculture, selling fruit and meat to processors. The market developed by happenstance when locals would pull into Richard's parents' driveway and ask if they had excess apples and peaches to sell. The couple set up a makeshift roadside stand that grew quickly into the full-sized market visitors see today.

"My dad was innovative and looking to the future," Richard said, noting how he constructed a substantial solid structure with cold storage very unlike the ramshackle temporary markets of farmer neighbors at the time.

"We've maintained it for 60 years," Richard added, noting that roadside selling is now the biggest income producer for his agricultural operation. "My dad sold almost everything to processors," he said, "but they don't pay now like they paid back then."

Richard has raised all kinds of things but noted, "After 28 years of sticking my fingers into more things than I could be successful at, I'm coming back to the basics of growing food."

Diversity remains an important component of the operation's retail strategy. Richard raises and sells everything from butternut squash to turkeys for holiday dining. He buys the turkeys as poults and then sells about 20 each November, fresh and unfrozen.

"White turkeys are quirky, emotional creatures," Richard remarked. "They're a little demanding and always hungry. It's like I'm married to them," he quipped, chuckling. "I feed them tomatoes, so if you buy a turkey from us, you're essentially buying a turkey marinated in tomatoes."

His humor masks some uncertainty about the future of agricultural careers for his children and grandchildren, the fifth and sixth generations. When his grown daughter announced she was coming back to the farm to live and work, he was delighted but also recognized the challenges of living from the land as commodity prices plummet.

Survival for the Richard clan depends very much on direct selling -- and anyone who wants to do direct marketing must be prepared to interact with the public.

"I'm a people person, and I love the retail end of the operation," he noted. "We're the oldest existing fruit market around."

He advised other producers to be true to who they are.

"Don't tell customers what you think they want to hear," he said. "It will bite you back. Be true to what you grow."

Richard noted that all the farm's income from peaches and vegetables comes from direct-to-customer sales. About 50% of apple income and all the income from the beef and turkeys come by way of his direct-marketing business.

He attributes the market's success to steady business from a combination of local buyers (some of whom he's served for three generations) and tourists from the metro D.C. area. He said most customers keep coming back because they appreciate knowing where their food comes from.

"Authenticity is very important for me," he said. "This is my product, grown straight from my soil. I only put my name on products I grow myself." 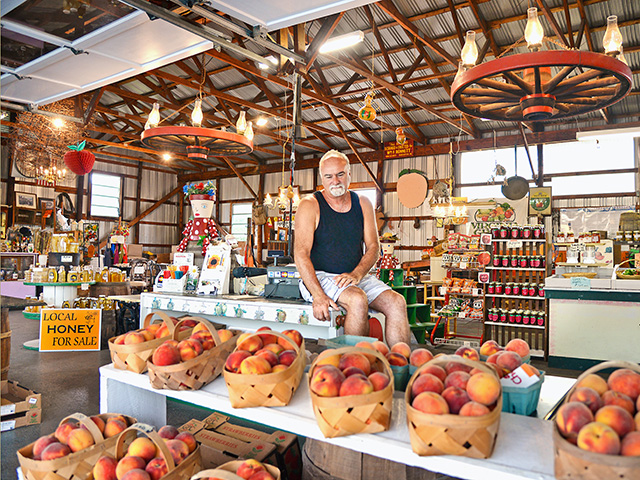