Spend some time at the local sale barn, and you'll figure out pretty quickly that a little ear is seen as a good reason to knock down the price for a feeder steer. This seems to hold true even in a market where buyers are all but fighting over calves.

If that doesn't convince you there's prejudice in cattle circles when it comes to Brahman blood, take a look at the specs for many branded beef programs. Brahman crosses are explicitly not welcome.

Do Brahman cattle really deserve the discounts? Or, has the newer generation of producers overcome quality challenges of the past?

The Facts. It is true a higher percentage of Brahman cattle are less likely to marble as well as Angus cattle, explains Dwain Johnson, University of Florida (UF) meat scientist. He adds the meat from these cattle is statistically less tender, and there is more variability in that tenderness.

Johnson and fellow UF researcher Mauricio Elzo reached these conclusions after feeding out and harvesting 1,367 head of Brahman, Angus and Brahman/Angus crosses from 1989 to 2009. However, the news was far from all bad for devotees to the Brahman breed.

Johnson explains they found there is a difference in tenderness, based on percentage of Brahman genetics in an animal. Less than 50% Brahman, and meat quality does not suffer significantly in either quality grade or tenderness. There is also a nice trade up on weights.

"In an F1 Brahman/Angus cross, there is a 60-pound increase in live weight over a straight Brahman or straight Angus calf. That weight gain and efficiency make up for most discounts you'll likely get in today's market. Bos indicus is a real positive," he says.

On The Grid. Brothers George and Henry Kempfer give Johnson's statement a strong "Amen." These fifth-generation ranchers, from St. Cloud, Fla., have been retaining ownership on their family's Brahman-sired steers since 1993. The brothers sell on a grid, where meat quality definitely matters. Their steers have graded as high as 79% Choice.

Dan Dorn has seen his share of feedlot cattle after working more than 18 years for Decatur County Feed Yard. He estimates he's fed between 75 and 100 loads of Brahman-cross cattle at the Oberlin, Kan., facility. Every load was sold on the grid.

"I wouldn't say the quality grades were much different. I don't know if it was genetics or the weather, but their feed conversions were about a pound higher than average." These cattle, Dorn adds, were fed in the winter.

In their experience, the Kempfers say both feed efficiency and gain suffer when their half to three-quarter Brahman-cross steers are fed up north in the winter. However, George Kempfer says that in the spring and summer, the steers have gained 3.5 to 4.4 pounds a day and have shown a feed-conversion ratio of 5.4 to 1 (dry-matter-intake-to-gain ratio). In a south Texas feedyard, he says feed conversion dropped down to 4.9 to 1 on milo.

As they track their cattle, the Kempfers want more than feedlot or carcass data; they want to know where their cattle stand when it comes to tenderness. They have Warner-Bratzler shear force (WBS) tests performed on samples of their beef to measure tenderness. These tests indicated in the Kempfers' case the majority of their beef was in the acceptable range. WBS values from 3.6 to 4.9 kilograms are acceptable; over 5.0 are considered tough. They have used this data to help them identify and cull those bulls siring calves with less than desirable tenderness.

A High Percentage. Bill Pendergrass, executive vice president of Beefmaster Breeders United (BBU), says Texas A&M did a multiyear carcass study in the 1990s, and of the 300 head of Beefmaster-sired cattle, 72% graded Choice. Beefmaster is a breed developed in the early 1930s from Herefords, Shorthorns and Brahman.

As producers continue to pay attention to details and genetics, Brahman-cross cattle continue to get better. What they need is more recent, real-world data and proven genetics.

BBU is on it, Pendergrass says. "We are now involved in a progeny test of Beefmaster-sired calves. They are being fed in a Kansas feedlot. I'm confident the results will be even better than they were in the carcass study done in the 1990s."

Beefmaster breeder Gary Frenzel says his family has been doing ultrasound measurements for 28 years on their animals. He's seen definite improvement in critical areas during that time.

Commitment to the Breed. Giving up Brahman genetics is not an option for any of these ranchers. George Kempfer says in his family's southern environment, they have to keep Brahman in the maternal lines. Along with Florida's heat, humidity, insects and parasites, he says their soils and forages are weaker.

"We can't get performance without Brahman blood," he stresses. "Crossbreeding is still a very important part of the beef industry. Hybrid vigor is for real."

UF's Johnson agrees. He says crossbreeds with Brahman blood are a good choice for producers who want to use a tropically adapted animal, or who have a low number of cattle and want to increase their output.

"The most heterosis you can get is crossing a Bos taurus [English or Continental breed] with Bos indicus," he stresses.

Texas A&M's Paschal points out, "It doubles the amount of heterosis. If a producer is only interested in marbling, I understand Brahmans are not going to grade like Angus. But the Brahmans of the 1980s are not the Brahmans of today. They have a lot of positive traits.

"Most commercial producers in the South are raising calves to sell at weaning. They can sure use Brahman genetics in that cow for environmental adaptability, maternal ability, maternal calving ease and longevity."

The Kempfers are all about getting the best use they can from Brahman genetics, but they believe it's important to cull hard. They cut cows and heifers for fertility problems, udder quality, calving ease and disposition.

"Every trait is magnified in crossbreeding," George says, adding a for instance: "People have to know how to handle them. They scare easy."

Henry says there's still room for improvement. "We aren't ashamed to admit there is more work to be done. We've taken on the challenge. With the low cattle numbers, what better time to prove to cattle buyers, feedyards and consumers that Brahman cattle are acceptable?" 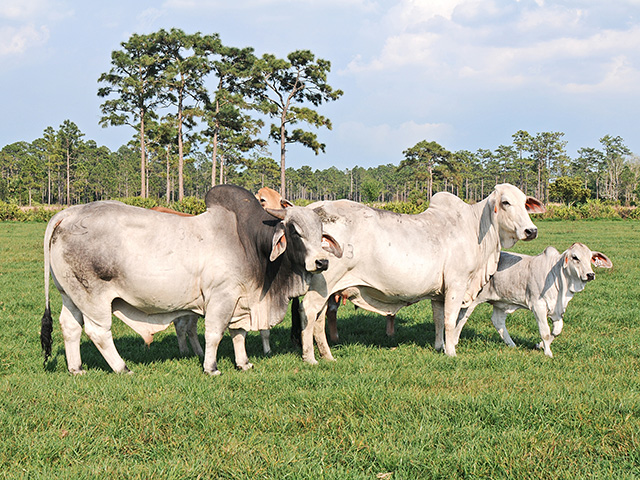