The queen of forages has a new sidekick in the South -- bermudagrass. It's a relationship that's providing a quality feed source for beef producers such as Judy and Bill Watters.

"We love it and would love to have more," said Judy, a Rome, Georgia, cattle producer.

Her interest in the combination was part of a ground-up plan for Oakdale Farms. Judy said they sold 75 head of commercial cows, plus their calves, in 2014 in order to build a herd of high-quality Angus. They knew to be successful, they needed forages that would help maximize the genetics they wanted to focus on in the herd.

Technical help for the makeover came from retired University of Georgia (UGA) forage-breeding researcher Donald Wood. Judy said they interseeded Bulldog 505 alfalfa into 16 acres of existing common bermudagrass. Bulldog 505 is an alfalfa variety developed by UGA specifically for the Southeast. Haylage from the pasture averages 120 to 180 in Relative Forage Quality (RFQ).

Dennis Hancock, UGA extension forage specialist, isn't surprised at those numbers. He said adding alfalfa to a bermudagrass stand will often add 30 points to the RFQ. Typical samples of bermudagrass hay, sent to the state forage lab for testing, often average an RFQ of 95, or 56.5% total digestible nutrients (TDN).

Judy and husband, Bill, use a Jaylor mixer wagon to blend a bale of alfalfa/bermuda haylage with either dry ryegrass or bermudagrass hay. They start feeding it to their 60 purebred cows and 55 recipient cows as soon as they calve.

Bill said the high-quality feed keeps body condition scores (BSCs) between a 6.0 and a 7.0. Whether they are synchronizing and AI (artificial insemination) breeding cows to set them up for embryo transfer or to have a calf, he adds they typically breed for three cycles before they turn in clean-up bulls. Bill credits the forage mix with keeping cows in good shape and positively influencing conception rates. They also feed the mix to replacement heifers, along with a small amount of cracked corn and minerals.

Hancock said the benefits of an alfalfa/bermudagrass mix don't stop with feed quality. "With alfalfa, you can grow your own nitrogen," he pointed out, adding that the bermudagrass allows hay to dry faster and cleaner. In addition, he said bermuda sod is thick enough that it prevents disk mowers from dragging up sand and grit.

It's also a little insurance. Because, as Hancock said, "Even if you lose the stand of alfalfa, you'll still have the bermudagrass."

With all the positives, Judy and Hancock caution alfalfa isn't for every producer. As Judy said, "You have to baby it."

Hancock said it's important to choose well-drained soil for both the alfalfa and the bermudagrass. Next, he stressed the importance of soil testing. Even before working on nutrients, pH is critical. The forage specialist said it needs to be at a minimum of 6.5, and not just in the top few inches of soil.

He explained: "I want to see a soil sample at least a foot deep. At 8 inches to 10 inches deep, soil usually becomes acidic. If you're planting alfalfa, the pH still needs to be over 5.5. As the pH drops, the aluminum in the soil becomes more soluble. Root development of alfalfa needs calcium around the tips. That takes an absence of aluminum."

To be on the safe side, Judy said they usually soil test both in the spring and in the fall, liming if needed to keep up pH.

In addition to soil tests, the Watters take foliar samples when they harvest alfalfa to ensure they are supplying the necessary nutrients. All they usually need is potassium.

Before interseeding alfalfa, Hancock advised checking back to see what herbicides have been used on the bermudagrass. "Some herbicides have a long residual period. You may have to delay planting 10 to 12 months," he explained. The label on any herbicide used should provide the residual information.

Once the right bermuda field has been chosen to interseed alfalfa on, Hancock said to shoot for a fall planting time. University of Florida forage-management specialist Jose Dubeux said they too like the combination and have found fall is the optimum time to plant.

"We have had more success by far with fall planting. Weed competition is reduced, the alfalfa grows better in the fall, and bermudagrass goes dormant, so there is less competition from it," he explained.

Hancock leans toward enforced dormancy with bermuda sod. First, he says cut or graze it very short, to a height of 1 to 2 inches. Next, spray it with a nonselective herbicide, such as glyphosate. He calls this "a chemical frost."

In the Watters' case, they burned bermuda back with a quart per acre of Roundup in September, then no-tilled in alfalfa two weeks later in October. Hancock recommends no-tilling inoculated alfalfa seed no more than a half-inch deep in 7- to 9-inch rows at a rate of 22 to 25 pounds per acre. Following those recommendations, Bill estimates they spent around $100 an acre to establish alfalfa in the bermuda sod. He added they got a quick payback, baling it by late May the following spring.

Along with fertilizer and lime, the Watters reported they had to spray three times in five years, once for armyworms and twice for alfalfa weevils. Hancock said scouting, and timely pest control, is critical, adding, "If insects destroy the seedling pushing up out of the ground, it is game over. Give the alfalfa a fighting chance."

As good as the bermuda/alfalfa combination is, the alfalfa is not forever. The Watters said their alfalfa is starting to die back, and bermuda is taking over again. That's about right, said Hancock, who explained the average lifespan of alfalfa in the South is normally four to seven years.

Now that the alfalfa is starting to die back, they are putting the field back in their grazing rotation while they scout for their next establishment site. For producers who rent pasture, the Watters said one slight drawback for the crop is the need for at least a five-year lease. However, alfalfa's production of nitrogen is a selling point to potential landlords, along with the need to maintain pH and fertility. Essentially, the lessor is improving the land, making it a win-win for all concerned. 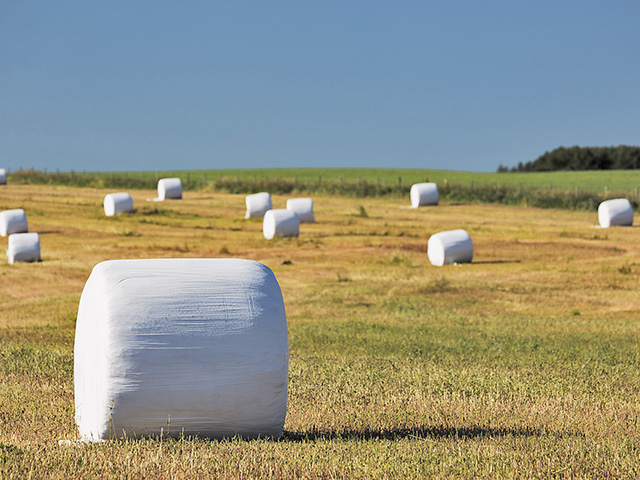