LINCOLN, Neb. (DTN) -- A bill in the Nebraska Legislature that would have provided farmers and independent repair shops with the necessary digital tools to repair agriculture equipment will not be voted on during the current session.

State lawmakers began consideration of LB 543 on Thursday, which, if passed and signed by the governor, would have made Nebraska the first state in the country to have an ag equipment right-to-repair law.

The current session of the unicameral ends on April 20. After Friday, there are only four legislative days left on the calendar, including April 11-13 and April 20.

Rather than forcing the hand of major agriculture equipment manufacturers to make all digital repair tools available to farmers and independent shops, the bill's sponsor, Nebraska state Senator Tom Brandt, told colleagues during a floor debate on the bill at the end of the day Thursday that he would rather see the manufacturers reach an agreement to do so.

In 2012, state lawmakers in Massachusetts passed a law giving car and light-duty truck owners and independent repair shops access to digital repair software and tools. The action led foreign and domestic car manufacturers to reach a memorandum of understanding to provide the tools in all 50 states.

"In January of 2020, I asked the representative of a major equipment manufacturer when farmers and third-party mechanics would be able to fully repair their own ag equipment," Brandt said in his opening statement about LB 543.

"They responded that the industry was working to have a right to repair available across the country by January of 2021. As of January 2021, nothing had been done. For the past year, American Farm Bureau Federation and the OEMs (original equipment manufacturers) have been working on a memorandum of understanding that would create a nationwide right-to-repair policy. Today, not much has been forthcoming."

Some state senators expressed concern about Nebraska becoming the first state to pass such legislation, pointing to ever-evolving agriculture technology as a reason why many farmers will increasingly need trained technicians to make repairs. In addition, one state lawmaker said the bill raises several questions, including legal liability.

Nebraska Attorney General Doug Peterson, however, found no legal issues of concern with LB 543 in an opinion given in response to a request by Senator Julie Slama in recent weeks.

Nebraska Farmers Union President John Hansen told DTN he was disappointed to see the bill put on the backburner.

"The speaker sat on it until the last day and scheduled it for 4:30 (p.m.)," Hansen said, "but making it clear that they were going to adjourn at 6 o'clock. And so, it got up about 4 o'clock. So, the opposition just talked for two hours. We didn't have enough votes for cloture. So, it was sort of set up for failure."

Because of the schedule, Thursday was the last day for any bill on general file to be heard and a vote taken.

"This was a great opportunity to do something at the state level -- pressure to bear for a national resolution," Hansen said. "That was lost."

Brandt said several changes had been made to the original bill. A section dealing with data collection and ownership, he said, was removed from the legislation. The scaled-back bill would allow owners and third-party mechanics the ability to repair agricultural machinery back to manufacturers' specifications.

"The goal of this bill is to protect competition, not prevent it as is happening today," Brandt said.

"Profiteering by OEMs not only affects farmers, but also local ag equipment repair shops that are not affiliated with dealers, often known as third-party mechanics," Brandt said. "Today, these shops are effectively locked out from completing repairs. They're qualified to perform repairs they can complete when they are provided with the appropriate manufacturer resources. This creates a monopoly where only dealers fix the equipment they sell, and farmers and local repair shops have no competitive resources."

Brandt said farmers across the state have been standing up and "being heard" on this issue.

"Because they had the courage to speak up, they tell me they have been retaliated against by the local dealership who refuses to sell them the necessary parts," he said.

In Europe, Brandt said, equipment manufacturers are required to make repair software available. As a result, he said, some American farmers are buying parts in Europe and bringing them back to the states.

"The equipment manufacturers, dealers and farmers are tied together as partners in producing large quantities of high-quality affordable foodstuffs," Brandt said. "Historically, all the partners have worked well together. This partnership has been strained by the reluctance of equipment makers to provide the necessary digital repair equipment."

OPPOSITION TO THE BILL

Slama spoke out in opposition to LB 543, saying it would have "wide-reaching" consequences.

"This kind of legislation would have (consequences) not just in Nebraska and not just in the ag industry but nationwide," she said.

Slama said there is a "safety and reliability component" of LB 543 that isn't addressed in the bill. She said tractors being used by farmers are "constantly changing," and manufacturers like John Deere are "constantly innovating" their products.

"I worry that LB 543 goes beyond just a basic right to repair, and it turns into a mandate that could really compromise manufacturer dealer safety," Slama said. "It raises all sorts of questions about liability."

"I'm a trained diesel technician," he said, "and for up until the last couple years, I have had the ability to really fix almost anything on my tractor or combine that needs to be fixed. Once in a while, I do have to call my dealer and have it fixed. But as we've added technology, I do not understand how it works anymore. I have not had training.

"This is a very complicated issue going forward. So, we're at a point in time where we start to see autonomous vehicles. I think we're reaching that point where we're never going to have an independent repair dealer available for cars or trucks or tractors."

Consolidation has led to a reduced number of equipment dealers in Nebraska, Brandt said, which has made it more difficult when farmers need help in the field from technicians who have the necessary diagnostic equipment.

"One dealer today may own 20 locations because of consolidation," Brandt said. "Eventually, we may end up with one dealership for the entire state, essentially a company store."

Currently, there are 46,332 farmers in Nebraska, according to USDA. There are six John Deere dealers in Nebraska, Brandt said, and 124 total dealer locations in the state.

"As a farmer, I appreciate that dealers still have a presence across the state, but with so few choices, it has reduced competition to the point that farmers are being hurt due to lack of competition," Brandt said.

The Equipment Dealers Association, a trade and lobbying group that represents John Deere and other manufacturers, told DTN in recent weeks that it "strongly opposes" LB 543 because of concerns the bill would lead to illegal modification of equipment.

"If this is happening today, then the dealers need to turn in the people modifying exhaust systems to the EPA because they are breaking federal law," he said. 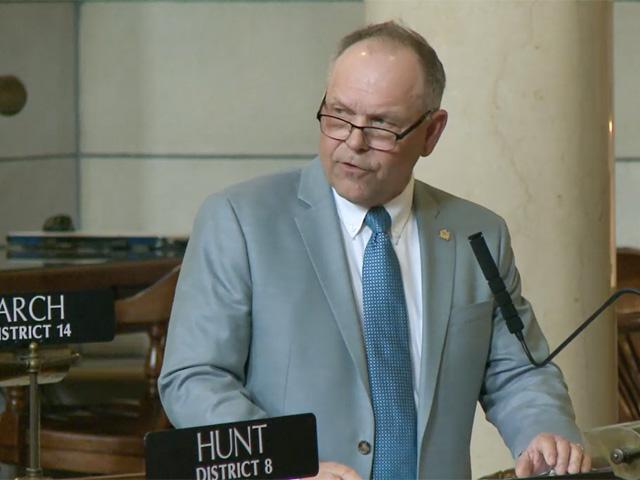