RIBERA, N.M. (DTN) -- The team behind the Mahindra Roxor heavy-duty side-by-side wants to focus on what its new-again 2021 vehicle is rather than what it's not.

At a media ride-and-drive event where the newly redesigned machine was unveiled at a ranch outside Santa Fe, New Mexico, they said it's a rugged, steel-bodied and framed, long-lived tool meant for everyday use -- not a plastic-heavy machine that may need to be replaced after a few years of hard work.

"We've redesigned the vehicle. We took the opportunity to listen to our customers and look at our marketing strategy," said Rich Ansell, vice president of marketing for the Roxor brand. "I'm not sure I'd call it a repositioning, but what we learned is recreational people love it, but the people who really love it are the people who need a vehicle for heavy-duty, hard-core work use because that's something conventional side-by-sides can't stand up to."

It is not, as the International Trade Commission ruled late last year, an infringement on the "Jeep Trade Dress," the claim filed by Fiat Chrysler Automobiles that shelved the previous model, released from 2018 to 2020.

It is instead the best of their initially popular design, pulled from the market by legal issues with Fiat Chrysler, with a few tweaks and a new look.

"Since the initial launch, Roxor has created a passionate following," Ansell said. "People love the unparalleled toughness and durability. Now we're looking to capitalize on this success in these brand strengths. While the vehicle underneath is unchanged, we have redesigned in to better reflect the strength and toughness that are hallmarks of the Roxor and Mahindra brands."

The company will roll out a phased launch, offering the new Roxor at 71 of its 500 total dealers this month, an effort to maintain some stock in the supply chain crises.

The mandated redesign isn't quite something Mahindra was ready to call a blessing in disguise, but it is safe to say the company is thrilled with the product it's bringing back to the market.

Much is the same.

There's a 2.5-liter turbo diesel engine under the hood putting out 62 horsepower, and the towing is rated to 3,490 pounds, the same as before.

That weight was managed seemingly effortlessly as the Roxor's base model toted a large hay-laden trailer up and down a gentle slope.

The 148-inch length, 96-inch wheelbase, 60.7-inch width and 9-inch ground clearance and 2,990-pound base-model weight are all similar to the original, as well.

There's a bit that's different, at least compared to the last iteration of the Roxor the public saw.

There's a selectable two- or four-wheel-drive five-speed manual transmission, meaning the automatic version introduced in 2019 is no more, at least for now. The vehicle is also launching with just two colors, black and Mahindra's signature red.

There are also two options packages.

The company initially forecast an 80-20 percentage split between the base model and the cabbed version, though early orders have put the more expensive model closer to 30%.

The body modeling is by far the most significant difference. When Roxor was first sold in 2018, Mahindra celebrated its then-70-year history with Willys, original maker of the iconic American off-road vehicles. That connection isn't getting quite the same attention this time around, as the company had to return to the drawing board to be able to return to the U.S. market.

The most notable changes are in the front of the vehicle. The grill is entirely new, and the wheel well is much larger, something that both benefits the company's goals to rework its exterior and to provide a machine meant for hard, off-road work.

"If you look at it from the side, it reminds you of a six-shooter," said Viren Popli, president and CEO of Mahindra North America. "How much of the previous model is carried over: in terms of siding, it's quite different. We completely redesigned the look and feel of the product. We fine-tuned some of the other elements."

On the dirt, the Roxor feels stable and solid, whether moving slowly on calm gravel roads or quickly on rocky trails. The engine braking is enough that some can get away with barely even touching the actual brakes. The transmission, meanwhile, is forgiving, even for the "but I don't normally drive a stick" crowd. 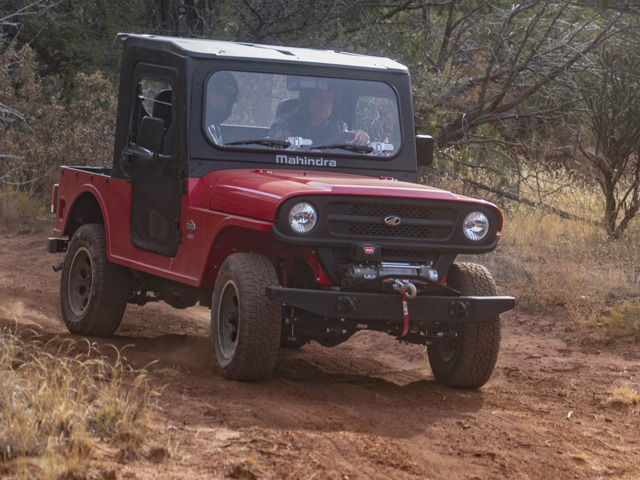