Last month I wrote my top 10 list of the best tractor series. I know these types of lists are highly subjective and show author biases, but I thought it would be fun to write.

And people LOVE lists. This column was among the most-read articles on DTN for several weeks.

As you can probably imagine, I did hear from a couple folks about my list. Here are their emails.

I was excited to see both earlier models of my tractor on your list. Mine is a Ford 640, while you listed both the 8N and the NAA/Jubilee.

To me, and I am by no means an expert, I would call all of them essentially the same tractor. All had similar features but were improved over the run.

Thank you for your enjoyable article.

I know it might not be the most popular series in quantity, but it is in quality, and that's the International 06 series. The 806 diesel is probably one of the best tractors ever made.

I know of three that have over 10,000 hours and haven't even had the head off yet. The 1206 wasn't as good since the extra power from the turbo caused rear-end problems but they were still a tough tractor.

The 706 wasn't a bad tractor either. Just something to think about. I did like your list though.

I thank both Chris and Tony for their emails. I'm glad both a Ford and International guy liked my list.

It was fairly easy for me to pick a couple Ford tractors for the Top Ten tractor series of all-time, but picking the IH 56 series was little more challenging. I debated between the 06, 56 and 66 series for quite a while.

All of these series had their merits, especially the 06 series as it was the first in a line of new series of IH tractors in the 1960s. I ultimately went with the 56 series as the amount of people I knew personally who had these tractors influenced me.

I also posted this column to my personal Facebook page and I had some interesting comments from that social media platform.

I had some "red" friends give me a bad time for putting the IH Farmall H/M as the No. 1 tractor series of all time. They were especially amused by the fact the H/M series was one spot ahead of the John Deere 20 series.

I did have to point out to them that previous generations of my family owned tractors from BOTH series, so it didn't really matter to me which one was first. My late grandpa bought a brand new Farmall M right after World War II.

Someone on Facebook also questioned why I didn't include any Case tractors on my list. I considered series from other manufacturers such as Case, Massey-Harris/Ferguson and Minneapolis-Moline.

They all made some good tractors but maybe not the best of all-time quality. Part of my qualifications for this list, you might remember, was my own experience with these tractors and I really didn't know anyone who had these tractor brands.

The final comment from Facebook on my top 10 list came from the husband of one of my cousins. He grew up on a family farm in east-central Nebraska and he was pleased I included an Oliver tractor series.

I knew his folks farmed but I did not remember they had Oliver tractors. They started out with Oliver and then went to White tractors once Oliver was purchased by White, he said.

He told me they had an Oliver 1650 and then several White tractors. His folks had a farm equipment auction probably 20 some years ago and he thought they sold a White 2-180 tractor on the sale.

I was there that day and I remember there was at least one White tractor, but I don't remember the number. I was not terribly familiar with those tractors so those numbers just kind of blend together in my mind.

I also have an uncle who had various 3- and 4-digit Oliver tractors over the years. I'm sure he would have also approved of an all-time tractor list with an Oliver series on it.

I want to wish everyone a Merry Christmas and a Happy New Year! 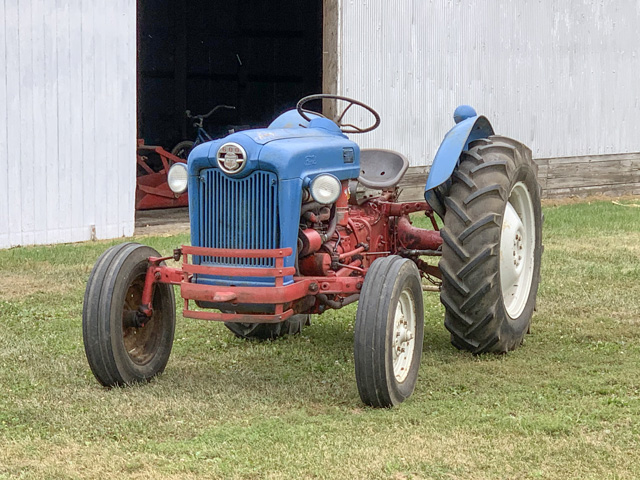