Last month, I received a Vintage Iron story and photo for the first time in quite some time. If you remember, James Piotter of Sleepy Eye, Minnesota, told us about his sharp-looking International 1456 tractor.

This month, we have another Vintage Iron story, and it's also about an International tractor. This one comes to us from north of the border.

Here is the story, sent in by Robert Robinson of Parkhill, Ontario, Canada:

"In the early 1950s our first backhoe was a Ford 8N with a Sherman hoe and a Henry front loader. Then we got an International 300 with a Wagner hoe and loader, which was new in 1956, and it was a great improvement.

"We paid $5,500.00 (Canadian dollars) for it as a demonstrator unit. We got paid $5.50 per hour for it with the operator. We used it on our farm drainage business and had it in Middlesex County much of the time, digging anchor post holes for the fences when roads were being widened and paved.

"The backhoe was purchased from CISCO Equipment, who sold contractor pumps, forklifts, etc. at this time. IHC did not sell these themselves, so maybe CISCO Equipment was a Wagner dealer. A few years later, IHC started making their own backhoes and loaders.

"Loader backhoes made great improvements in the 1950s. Case brought their first 530 hoe out in 1958, which was a much stronger hoe and loader.

"Wagner and then IHC made great improvements, also soon utilizing loader backhoe which were made by early '60s. Massey-Ferguson had a good backhoe loader as well. I don't know when John Deere got into this market as well.

"We ran it steady for 10 years; by then, new hoe prices had gotten to $10,000.00 and we were only getting $6.00 per hour, so this didn't pay as good. Many owner operators quit and went to work as an operator for a contractor.

"By the 1980s, we paid a 40% premium to the U.S. dollar. We in Canada are affected by the exchange rate, the Canadian dollar to U.S. dollar. So the price of a machine might increase by a third, and not much increase in machine rates were seen.

"The International 300 was used up to 1975 as a backhoe. The hoe was time consuming to remove so we just took the hoe off, leaving the controls and stabilizer.

"The 300 was used on the farm as a loader until 2010. The unit was disassembled and restored with new tires, hydraulic hoses and a wiring kit in 2018.

"Times change and are all the same."

My thanks go out to Robert for the interesting story and photo of his 1956 International 300 with Wagner backhoe and loader. That is one of the more interesting rigs I have seen -- not that I know much about tractor-mounted backhoes.

And I will be honest: I don't know if I have seen too many International 300 tractors, at least the standard or utility versions. According to tractordata.com, the International Harvester 300 was built from 1955 to 1956.

The total number of 300s built was 59,928 during the two-year production run. The site said a variant was a row-crop Farmall 300, which I have seen before.

I suppose the region you live in also probably dictates what version of tractors are more common. We don't see many standard or wheat-land tractors here in eastern Nebraska. A majority of the vintage iron tractors you see in our area are row-crop tractors.

On my family's small farm, we have a mid-1950s International 400 tractor, with a wide front end and a dual loader. The 400 is not anything fancy. It's our backup loader, but it does come in handy to have two tractors with loaders in the fall when we bring round hay bales home some 25 miles away from the hayfields.

Let's keep the streak going. Who is going to send me something for March? 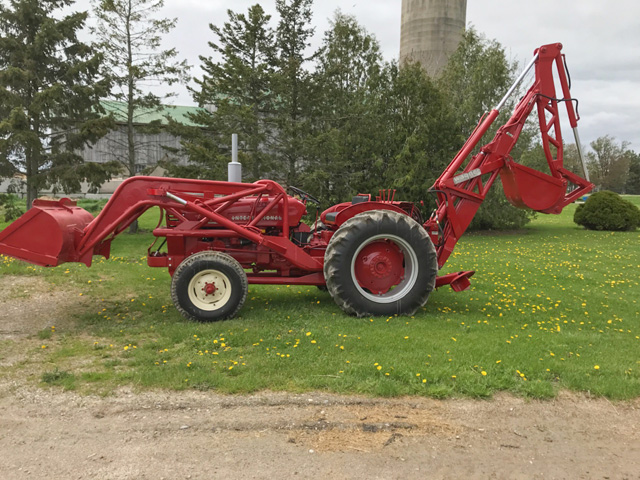