SAVANNAH, Ga. (DTN) -- Global agriculture has been somewhat behind other industries in adopting digital technology. But, as in other aspects of modern life, this technology is slowly transforming different areas of agriculture, including how crops and livestock are produced and how ag businesses operate.

Digital technology and its impact on agriculture was one major topic of discussion at the 2019 Fertilizer Outlook and Technology Conference here on Wednesday. The annual meeting is hosted by The Fertilizer Institute (TFI) and the Fertilizer Industry Round Table (FIRT).

Allan Gray, executive director of the Center for Food and Agriculture Business at Purdue University and Land O'Lakes chair in food and agribusiness, said during a round-table discussion that digital technology will aid in improved transparency and increased production and sustainability in the future of agriculture. Consumers want to know details about their food, and digital technology helps to satisfy their need for information, he said.

A recent survey reported transparency is "extremely important" to 36% of consumers, Gray said. A complete list of ingredients was the most important factor for 65% of consumers in the same survey, he said.

Gray said that among the technologies included in this area would be "blockchain," a term used frequently recently that many people don't completely understand. According to the Merriam-Webster dictionary definition, blockchain is "a digital database containing information (such as records of financial transactions) that can be simultaneously used and shared within a large decentralized, publicly accessible network."

Walmart already uses the technology to track its leafy-green vegetables from its suppliers' fields through being processed and sold in its stores. This process can pinpoint issues in the entire supply chain and protect customers from foodborne illnesses.

Gray said agriculture is behind other industries in adapting digital technologies. While this may be the case, ag is moving toward adapting the technology thanks to innovative smaller companies leading the charge.

"You look at robotic milking machines on dairy farms as one example of this technology already in use," Gray said. "These producers can now become better managers with more time to examine data since they aren't the ones milking the cows."

Gray said another advantage of digital technology is that it can be scalable. He used a 300-cow dairy with robotic milkers as an example.

The technology allows those who incorporate it to use fewer resources and get more from the technology. It can increase productivity and improve sustainability, he said.

Michael Swanson, senior vice president, agriculture economist and consultant for Wells Fargo and Company, said because of digital technology, nearly everything is connected. This is true with ag, and we are now in a closed-loop system, he said.

"I compare this technology to when basketball added the three-point line; I'm sure some of you remember this," Swanson said. "This one rule completely changed how the game is played, and the same can be said about this technology in agriculture."

While digital technology can aid in North American agriculture, it can also help small farmers in such places as Africa. The technology can increase crop yields in places often called "the last frontier" of agriculture.

William Wu is co-founder and CEO of QED, a small firm in Africa attempting to use digital technology to solve basic issues on the continent, ranging from agriculture to human health. The company builds low-cost data systems for farmers and others in Africa.

In many cases, African countries face more obstacles than other countries do that can limit crop yields. Some of these issues include a lack of education, limited fertilizer use and local corruption.

"We are customizing technology for the realities on the ground here in Africa," Wu said. "We are motivated by technologies with problems worth fighting for."

Among the products QED is in the process of developing is in-field spectroscope. This process uses a smartphone to analyze soil samples in the field in a short amount of time, he said.

The product eliminates a couple different issues often found in African agriculture. Many places don't have an expensive spectroscope equipment to break down what is found in soil, and transporting soil samples between different locations is often an extremely slow process, Wu said.

This technology will allow African farmers to know what is in their soil in a short amount of time and then do something about it, he said.

"We really feel industrial partnerships is key for the future of humanity in Africa," he said. 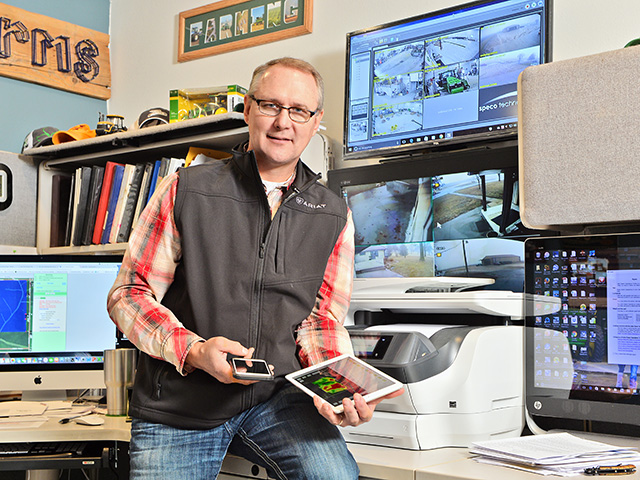