In my last column, I asked if anyone had any experience with Leader tractors, a name that appeared a couple different times on different tractors. This was after seeing a 1940s Leader tractor at a museum on our family vacation this summer in Branson, Missouri.

I guess the answer was "No" because I didn't hear from anyone about this subject.

That's too bad; I was really hoping at least one person would have sent me a story about using a Leader. If anyone has a story about Leader tractors, please feel free to still send it to me and we will run it in a future column.

Speaking of not-well-known farm equipment companies, the other day on Twitter, someone posted a photo of a self-propelled Fox forage chopper working in a cornfield harvesting corn silage. I wish I had saved the photo because you don't see too many of those.

When I was kid, my dad had a 1960s-era, pull-type Fox chopper with a couple hay heads and a two-row corn head.

I don't think he chopped corn silage with it, but he would chop hay, occasionally green chopping alfalfa. I believe he would do this during the late-summer/early fall period when the pasture grass was waning but before grazing the cornstalks.

I remember this pretty clearly because it was probably the first time I got to drive his old 1973 Ford F-100 pickup on the road. As I have written before, the farm had a little creek that divided it in half, so we had to drive on the county road to get to the east side of the farm.

I was probably around 12 years old and I would run the feed wagon out to the field. You would go out one gate on the west side of the stream, go over the bridge on the gravel road and then go into the gate on the east side of the creek. I was only on the road for maybe the length of a football field, but man, did I feel mighty important.

The '73 pickup was his only pickup for about 10 years, and let's just say by the time I was driving it out to the field, it was very well used.

It was painted bright orange, and by the mid-1980s, it was orange for another reason: It was extremely rusty. It was so rusty you could see the ground moving below you if you picked up the mats on the floorboards.

Dad hauled everything from hay to cattle in the back of that pickup. Many cows and calves were hauled to and from local sale barns, and he even hauled to the old Omaha Stockyards with that truck and the metal slide-in stock racks.

He had bought a different pickup in 1983 -- his first pickup that was four-wheel drive. The '73 pickup was relegated to farm duty, mainly pulling hay wagons in summer and hauling fuel tanks around at harvest.

As I got to driving age, I thought I would drive this pickup, but because it was so rusty -- and had some major mechanical issues -- we decided this was not a good plan. I ended up buying a 1978 Ford F-150 pickup with slightly less rust as my first vehicle.

(Side note: To this day, whenever I see a 1970s Ford pickup on the road, I immediately look to see if it has round headlights. I believe '78 was the last year for round headlights, and in 1979, Ford switched to a square one.)

The '73 sat on our place not running for several years before we got it running again. At this point, we put a "For Sale" sign on it and parked it at the end of our lane along Nebraska State Highway 31. Before we knew it, several people stopped. Someone offered him the right amount of money (I think it was $300), and it went down the road.

The old Fox chopper never got used again that I can remember. Dad had someone haul off some old equipment one time many years ago, and he had them take the chopper and the heads for scrap iron.

It's interesting that one tweet would make me think back to that classic pickup and vintage chopper. I have to admit I haven't thought about either one in many years. 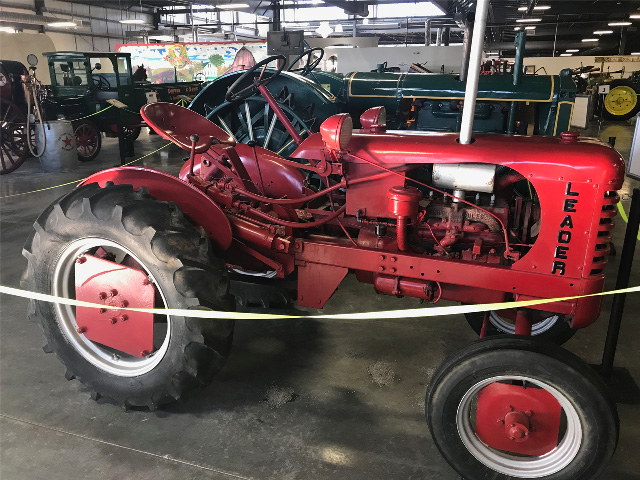