Leif Magnusson, president of CLAAS Global Sales America Inc., said the combine equipment manufacturer is affected by higher input costs and higher sales prices because of current tariffs imposed by the Trump administration and China. Input costs are going up as steel and aluminum imports have been hit with tariffs and U.S. metal producers have raised their prices as well.

All of that boosts the costs to make heavy equipment. At the same time, Magnusson noted, his customers are farmers who have seen declining prices because of lost exports to retaliatory tariffs.

"How can we go out in the market right now and ask for higher prices from the farmers when their income is going down?" Magnusson asked.

Despite finishing negotiations on the new North American free trade agreement, the United States-Mexico-Canada Agreement (USMCA), the Trump administration has not moved to eliminate tariffs on imported steel and aluminum from those countries. Other major steel and aluminum exporters to the U.S. face the same tariffs as well. At the same time, the U.S. and China spent much of the summer raising tariffs against each other in an escalation that now encompasses several hundred billions of dollars' worth in goods, including nearly all agricultural exports to China.

Magnusson acknowledged most farmers are supportive of the Trump administration's aggressive stance against other countries on trade, particularly China, to reduce the trade deficit long term. But, given the steady decline in income for farmers, Magnusson said he is concerned how lower farm income will affect large combine machinery sales, most of which happen between October and the end of the year.

"To me, I don't know how this October-to-December sales period will turn out in the end," he said. "We will see, once the lower soybean prices start to hurt income, is that also going to reflect in holding off on a purchase? It's too early to say, but we will see."

While also pointing out the challenges finding labor in a tight job market, Jim Glazer, president and CEO of Elliott Equipment Co., also said his company has seen steel prices increase on average 22% with the import tariffs.

Glazer also said he's concerned about the tariffs becoming inflationary as costs are passed on to customers. Glazer also pointed out some industries and businesses end up getting exempted from paying the tariffs for steel and aluminum imports. "It becomes picking winners and losers to some degree and contrary to our definition of what capitalism is," he said.

Mark Zumdohme, president of Graepel North America Inc., runs a small manufacturer that makes corrugated aluminum products, including ladder rungs that go on CLAAS combines. Zumdohme said Graepel is challenged with having to pass on higher costs to its buyers, which are mostly other manufacturers.

"It's almost like a tax on all of us at the end of the day," Zumdohme said. "We are all paying this additional burden." He added that trade talks are going the right direction, such as completing the USMCA, because those are top export markets for Graepel's products.

Still, Graepel, which is based in Germany, invested in the U.S. to build its operation in Omaha. Given the politics of trade, Zumdohme said, it is harder to now pitch investment in the U.S. "I think we need to get back to pro-free-trade policies," he said.

Dennis Slater, president of the Association of Equipment Manufacturers, has hosted other events around the country with equipment companies spotlighting the rise in steel and aluminum costs that have gone up as much as 60% and are affecting manufacturers and costing workers, he noted.

Further affecting manufacturers is their machines are losing competitively when exporting to other companies from countries not dealing with tariffs. "And I thought that was the reason for the tariffs in the first place was to protect jobs," Slater said.

Magnusson also stressed the need for the U.S. to reinvest in overall infrastructure. He pointed out the federal share of investment annually in infrastructure spending has gone down in recent decades. Magnusson said he thinks an infrastructure program could get bipartisan support, but also further stimulate the U.S. economy.

"If you poll farmers or any American and a majority of people in all sectors of life, they will all agree that infrastructure is good for the economy and the United States," Magnusson said.

Magnusson added rural parts of the country could use more infrastructure investment to keep the U.S. advantage in agricultural exports. "For the farmers, water locks are very important for export and the congestion today translates to tens of thousands of hours of waiting while barges get through the locks," he said. "When it gets down to the ports, there are also some inefficiencies there."

Prior to the CEO's roundtable, CLAAS hosted Nebraska Gov. Pete Ricketts, as well as Nebraska Sen. Deb Fischer and Rep. Don Bacon, who also spoke on the farm bill, trade, immigration and tax relief. All three Republicans are facing reelection next week.

Talking about the farm bill, Magnusson told lawmakers he prefers the Senate version of the farm bill because of a broadband provision that would require USDA's Rural Utilities Service to focus its grants and loans on deploying broadband more in areas that so far have been left behind. Magnusson said rural broadband investments are critical because new machineries such as combines are loaded with electronics that need to communicate with farmers and other machinery. 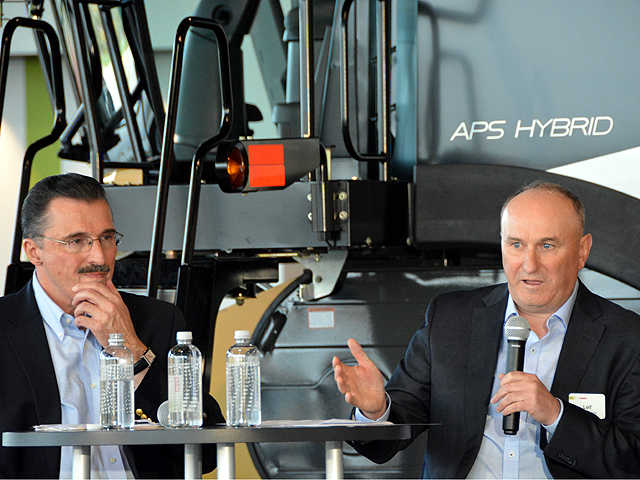