OMAHA (DTN) -- Suffocation from grain engulfment is a risk for people working in and around grain storage facilities, both in commercial grain operations, as well as on-farm situations. A new campaign aims to prevent these types of often deadly incidents.

The National Grain and Feed Association (NGFA) is working with the Occupational Safety and Health Administration (OSHA) to raise awareness of this issue, NGFA Vice President of Safety and Regulatory Affairs Jess McCluer said in a webinar on Tuesday. The American Feed Industry Association (AFIA) and the Grain Elevator and Processing Society (GEAPS) are also collaborating on the project, he said.

"The goal of this joint agreement is communication between NGFA members, state and regional affiliates and regional and area offices," said McCluer.

Bonita Winningham, deputy regional administrator for OSHA Region 7, said during the webinar that the industry needs to have a shared message of preventing more grain engulfment incidents.

The No. 1 reason for engulfment is out-of-condition grain, according to Greg Rowe, vice president of grain operations at Perdue Agribusiness, another presenter in the webinar. Engulfment can happen in one of three ways: unloading, bridging or avalanche engulfment.

According to an OSHA fact sheet on grain storage bins, flowing grain acts like quicksand and can bury a person in seconds. From the time the unloading auger starts, if you're in a bin, you only have two to three seconds to react. In another four to five seconds, you are trapped -- and after just 22 seconds, you are completely covered by grain.

Avalanche engulfment happens when a worker stands next to an accumulated pile of grain on the side of a grain bin. The pile can collapse onto the worker unexpectedly and result in suffocation.

"In most cases, you need to address the hazard without entering the bin," Rowe said.

Commercial grain companies have to obey OSHA rules and regulations, whereas private farms do not, Rowe said. Despite this, safety around stored grain is important in both situations.

In the question-and-answer portion of the webinar, Rowe was asked if there were still situations when a person should enter a grain bin.

While he said he would like to say there is absolutely no reason to enter a bin, he acknowledges there are older grain storage facilities where workers still might have to enter them. With newer facilities being built, the industry is moving away from this and closer to zero entry, Rowe added.

Training is key in keeping safe those who work around stored grain, Rowe said, especially since some employees may not know the dangers of flowing grain.

Rowe said complacency around stored grain is a dangerous situation. The mindset of "nothing bad could happen here" needs to be changed.

Production pressures in the commercial grain business can also compromise safety, he noted. For example, people might skirt around safety rules to save time as they rush to clean out and prepare particular bins for more grain.

OSHA rules state when workers enter storage bins that all mechanical, electrical, hydraulic and pneumatic equipment must be turned off, locked-out and tagged, according to the OSHA fact sheet. This is particularly true for grain-moving equipment, as grain must not be moved while workers are inside the bin.

Workers are prohibited from walking down grain to make it flow and are prohibited entry onto or below a bridging condition or where grain is built up on the side of the bin. Workers entering bins need to have a body harness with a lifeline, which is a sufficient length to prevent a worker from sinking further than waist-deep into grain. 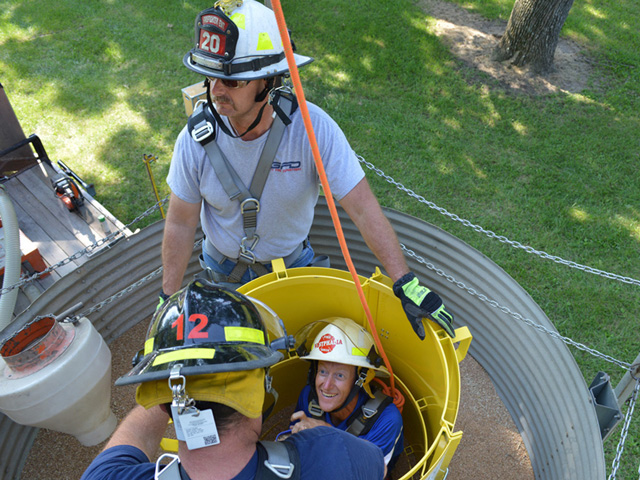