If you don't have hilly fields, consider yourself lucky, especially in this era when "teeter-tottering" booms can cause disaster. With one end stuck high in the air, the other scrapes the crop canopy. This can mean ineffective spray application of expensive chemicals or, worse, drift.

DTN/The Progressive Farmer asked some manufacturers' application product managers for advice on how to spray hills.

The first thing we heard was new technologies make the task easier than in the past. Indeed, that's true.

Almost all new self-propelled sprayers come from the factory with sophisticated technology to cope with terrain variation. Auto boom height controls, for instance, raise and lower the booms uniformly. Sensors detect changes in terrain and instruct hydraulic devices to adjust the boom height accordingly. This technology is especially helpful when going up and down hills.

Antisway technologies work to prevent a "teeter-totter effect," especially during turns on side hills and terraces. John Deere's BoomTrac Pro, for instance, combines hydraulics and sensors with a swing link suspension to translate chassis and boom roll into lateral movement rather than a teeter-totter effect.

"Rather than a pendulum effect, it moves more side to side to keep the boom in tune with the sprayer a little more," said Doug Felter, a John Deere marketing manager.

Other manufacturers offer different strategies for controlling sway. All the brands' technologies can be very effective, but none are perfect.

For boom height and antisway tools that use sensors, "Folks need to understand that all these technologies only see what is right below the sensor; they can't see what's ahead," said Mark Burns, Case IH application equipment marketing manager. "The slower you go, the more time the system has to adjust."

Don Keller, a product marketing manager for New Holland sprayers, agreed: "Slow down for obstacles. Give the sensors a chance to work. These [newer] machines will handle terrain faster than the sensors can respond."

That advice is what we heard most frequently. Slower speeds give machines and (if manually operated) drivers more time to react.

Given the limits of technology, other strategies come into play. "Guys aren't going to like to hear this, but if you are in hilly conditions, you might have to run a narrower boom sprayer," said Bob Schnell, also a product marketing manager for New Holland.

His message: Fold the outer boom wings for the hilly areas, and unfold them for the flat areas. You're going to lose a little time in the hills, but that beats the alternative of losing spray pattern or causing drift.

Changing your path through the field is another way to deal with hilly terrain, Keller explained. "Most guys are going to make their outside pass first, then they are going to start on one end and work their way back and forth. But, if you have terraces in that field, there is nothing to say you can't start next to those terraces and spray them off first," he said. "That way, your boom isn't trying to ride up over them, because you're 30 feet away from it and have 60 feet of boom hanging out on that side."

Deere's Felter has a similar suggestion: "Consider: 'Do I need to approach this slope or terrace in multiple ways?'"

By rethinking your route, you could reduce the impact of hills on each pass. That gives you an opportunity to use section control, Felter said. "Depending on how severe slopes are, individual nozzle control does help. Section control can automatically turn on and off as you encounter areas that were already covered. So you can approach those aggressive areas little by little."

Be very specific about which nozzles you turn on and off in painting these aggressive slopes little by little. A new path might be more complicated and take more time, but it could lead to a job well done.

While DTN/Progressive Farmer had manufacturer's reps on the line, we decided to ask: Which sprayer options do you recommend for the best return on investment?

New Holland's Bob Schnell was most specific: "If you are going to spend money on technology, the first thing you should buy is auto boom height control; the second thing would be PWM (pulse width modulation); the third thing would be direct injection."

His colleague, Don Keller, added section control to the list. "It started with five sections. Now, it is up to 10 sections for most booms. With PWM, you get into virtual sections where you turn off one or two nozzles at a time. In odd-shaped fields, you can really get some cost savings on your chemicals."

Case IH's Mark Burns said ROI depends on individual circumstances: "First thing we emphasize to dealers: Don't go into a customer with a preconceived notion. You have to go in with your ears on."

That said, he is a fan of PWM because it prevents pressure fluctuations at various speeds to ensure pattern and droplet size are consistent. It also offers instant off for turns or overlap areas. "You can save on input costs just by eliminating that dribble down," Burns said. And, PWM enables turn compensation technology, which adjusts volumes during turn to prevent under- or overapplication. Underapplication can lead to weed resistance; overapplication is money wasted and can lead to possible damage.

-- It really helps with rinse timing and effectiveness, less time and better results. "If you aren't swapping chemicals very often, it [DI] probably doesn't mean that much to you. But, if you are swapping, it could be a huge deal" in time-saving and liability concerns.

-- If you have buffers, DI will help save time, because you don't have to come back again with a different chemical. You can just use the second DI tank.

-- Selecting chemicals is becoming more and more precise, and that makes swapping tanks a great convenience. With DI, "it can be a great value" in saving time and labor. If you have to clean, rinse and swap chemicals, "You have really missed some valuable time when you could be spraying," Felter said.

Jim Patrico can be reached at jpatrico@gmail.com 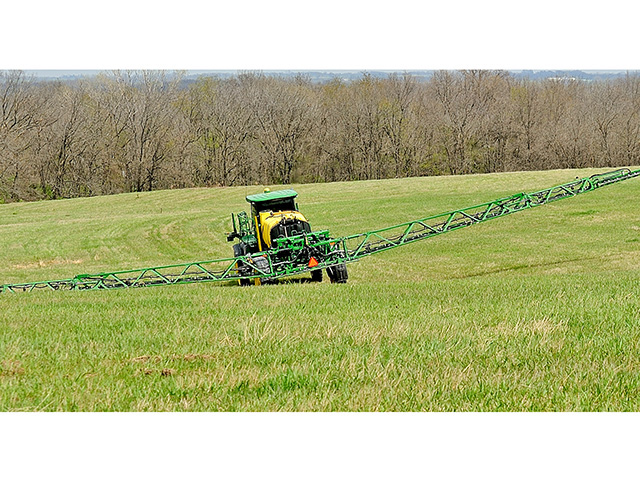