The Holy Grail of weed control would be a fast system that kills invasive plants, does no harm to crops, and uses a minimum of herbicide. The See & Spray system from Blue River Technology -- while still in a testing phase -- might be as close to that ideal as anything we have seen so far.

See & Spray is based on machine learning, sometimes called artificial intelligence. It is designed to be able to tell the difference between crop and weed. It then squirts a shot of herbicide accurately on only the weed.

Blue River Technology, a Silicon Valley start-up, developed the system and used it in cotton field trials last year in Arkansas, Missouri and Texas. Results were encouraging, CEO Jorge Heraud said. "We project it could produce up to 90% savings in [herbicide] material."

Results in cotton with the hooded sprayer were good enough that Blue River will test See & Spray in cotton again in 2018 and also will do trials in soybeans. John Deere liked what it saw in the 2017 trials and bought Blue River last fall.

The idea of selectively spraying for weeds is not new. About 20 years ago, the Patchen WeedSeeker -- researched at Oklahoma State University -- came onto the market. It used cameras that see infrared portions of the light spectrum to identify chlorophyll, i.e., growing plants. The WeedSeeker then triggered a sprayer to blast away anything green and growing. The device originally was marketed to kill plants along railroad right-of-ways.

The foundation of the system is a deep-learning algorithm, similar to one used by Facebook to recognize faces. Cameras on the See & Spray toolbar (one camera per row) send images to a computer processor in the tractor cab, which differentiates between cotton plants and anything else in the row. When it sees "anything else" growing in the row, it targets it with a precise spray pattern.

Key to the system is teaching the processor to recognize a crop -- no easy task, Heraud explained. Machine learning of this sort requires a neural network that replicates how a human brain works. That means interconnected artificial neurons -- 50 layers of them in the case of See & Spray.

SMILE FOR THE CAMERA

Blue River collected more than a million photos of cotton plants from all angles and lighting conditions to feed into that neural network so it could learn what to identify. They collected those images using cameras mounted on data carts pulled through cotton fields. They also used prototype See & Spray systems that only "saw" and did not "spray."

"The tricky part is getting each photo labeled as cotton," Heraud said. A small army of 200 people all over the world (part of an Amazon subsidiary) did the labeling. All of those labeled images were fed into the processor so it could learn what to spray and what to save.

Last year's See & Spray model ran at about 5 miles per hour. This year's trials will use a new processor invented for the video gaming industry. It is 50% faster than the previous processor. "Guess what? We can drive faster," Heraud said.

The new processor will allow See & Spray to conduct search-and-destroy missions at 7 to 8 mph. Heraud's long-term goal is 12 to 15 mph.

The system can detect a plant as small as 1/4 inch tall and can be programmed to create a spray buffer around the crop. The current buffer default setting is 1/2 inch, which tells a lot about how accurate the system is. It's like "painting with herbicide," Heraud said.

That accuracy means less herbicide is likely to move off target.

Having this much computing power in a tractor cab will have side benefits, Heraud said. For instance, the system could record the number of times and locations it sprays, which could give a farmer data on the level of his weed infestations. Blue River is planning to teach See & Spray to identify weeds, not just crops, Heraud said. That would provide more sophisticated data on weed populations and help growers develop different weed-control strategies for each field.

Take that a step further. If See & Spray could differentiate between palmer amaranth and foxtail, it could be programmed to select one chemistry for one weed species and a different product for a second weed species. That specificity could increase efficiency and maybe help slow weed resistance.

See & Spray is not perfect. As a technology, it is "still in development," Heraud said. For instance, it is not yet a plug-and-play system. Technicians, not farmers, have operated the prototypes.

"Getting an easy user interface has not yet been our main focus," Heraud said. But as See & Spray comes closer to market, Blue River will concentrate more on that aspect of the technology. The goal is to simplify it for a broad base of users.

How long before trials and tweaking are done, and See & Spray comes to market? "As you can imagine, I have been asked that many times by our investors and now our new company [John Deere]," Heraud said with a laugh. "Honestly, that depends on how testing goes."

This year, for instance, See & Spray prototypes will be running in both cotton and soybeans to work out glitches, make improvements and collect new images for processing. Heraud said he is looking at 2020 or 2021 as possible launch dates.

"The message we are getting from Deere is: 'Make sure you have a machine that works really well for customers before we go to market,'" Heraud said.

Blue River Technology got its start when two Stanford University classmates -- Jorge Heraud, a former head of precision agriculture at Trimble, and Lee Redden, a PhD student and roboticist -- joined forces. The idea was to use artificial intelligence and robotics to help agriculture become more efficient.

An early project was the LettuceBot, a machine that can automatically thin stands of lettuce to increase production. It won a prestigious 2017 AE50 Award from the American Society of Agricultural and Biological Engineers.

John Deere bought Blue River Technology for more than $300 million in September 2017. It is now a Deere subsidiary with Heraud as its CEO. 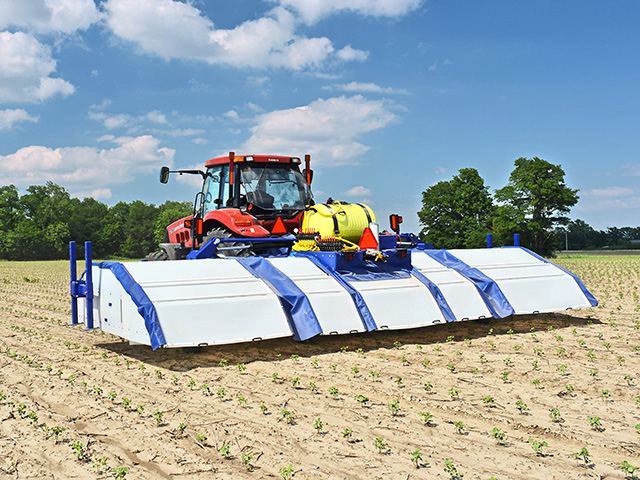