HANNOVER, Germany (DTN) -- Germany might seem a long way to go to get a glimpse into the future of farm equipment. But every other year the Agritechnica trade show in Hannover, Germany, is worth the trip. Manufacturers from all over the world use Agritechnica as a launch pad for new products or concepts that one day might work the fields.

The largest farm show in the world covers almost 100 acres, and this year had more than 2,800 exhibitors from 53 countries and was expected to draw about 400,000 visitors from Nov. 12-18. The theme this year was "Green Future -- Smart Technology."

In keeping with the theme, robotic equipment inhabited each of the fairground's 27 buildings this year. Electricity was also trending. But even innovative mechanical equipment points the way to the future.

The following are some examples.

Imagine swarms of three-foot-long robots planting cornfields. Fendt Project Leader for Robots Thiemo Buchner has spent the last two years refining that idea and says a robot named Xaver will be in production and for sale by 2019. The project originated with the name Mobile Agricultural Robot Swarms (MARS).

The battery-powered robot can carry about 25,000 corn seeds and will hold a charge for up to three working hours. Then it will head to the recharge station, fill with corn, recharge and head back to work. A swarm of 10 Xavers can plant a 100-acre field in 40 hours, working 24/7 with no human supervision.

This vision might not work as well for North American farmers as it might European farmers. Size is one reason. At the stated planting rate, it would take more than two weeks to plant 1,000 acres. That's not fast enough. Second, Xaver only weighs about 140 lbs., too light to cut a furrow in unworked ground. That requires primary and maybe tillage passes in advance of planting. Fine for Europe, not as acceptable in North America.

But Buchner told DTN/The Progressive Farmer that Xaver is scalable. So the concept might have a future here yet.

Fendt also displayed the e100 Vario at Agritechnica. This 67-hp, totally electric tractor is aimed at the same market as Fendt's 200 Vario: intensive small acreages such as vineyards and orchards. It will have other applications where it is vital to have no CO2 emissions such as indoors in greenhouses. Municipalities might like it to cut air pollution.

The e100 has a working charge of five hours and has two options for recharging its 650 V high-capacity lithium-ion battery. A direct voltage supercharger takes 1 hour; a standard electrical hookup takes five hours.

The tractor comes with PTO connections for hydraulic implements and 700-volt outlets for electric implements.

Western Europe has seen an increase in corn borer, probably as a result of wetter growing seasons. To combat the problem, Kemper Maschinefabrik GmbH and John Deere collaborated on a device to blast corn stalks to bits as a combine goes through the field.

Available next year in North America, the StalkBuster is integrated into the header and uses an angled spinning blade to destroy -- not cut -- stalks. That can save a field pass with a shredder. Kemper has not yet released power requirements or costs.

Seasonal traffic of large farm equipment on the roads sometimes leads to accidents. CLAAS has developed a GPS-based system to cut the odds a car and a tractor will collide on the highway. Its Telematics Large Vehicle Alert System works in conjunction with automotive guidance systems. The tractor/combine/sprayer on the road sends a signal that interfaces with a car's guidance system. An alert pops up on the car's GPS screen warning that a large vehicle is approaching. Currently, CLAAS is partnering with BMW and also is talking with other automotive manufacturers and Google.

Kubota displayed a concept spreader that works with a combination of electric and hydraulic power to precise placement. The eSpreader has two discs that can operate independently and at different speeds. That can produce section control and variable rate capabilities. Power for the electric drive comes from a PTO generator.

The system can be retrofit to many tractor models. Kubota has not set release date for the eSpreader.

To add or subtract weight quickly from a tractor, John Deere previewed a hydraulic system that can be operated from the cab of a 7R tractor. Called EZ Ballast, the system uses a dedicated hydraulic cylinder in the center bottom of the tractor frame. The driver positions the tractor over a cast iron frame; the system grabs and raises the 1.7-ton weight. The drive then locks the ballast in place with another push of a button.

Reverse the system to lose the ballast and make roading more fuel-efficient.

Deere is looking for customer interest before officially launching the system, which might also be adaptable for 6R tractors. 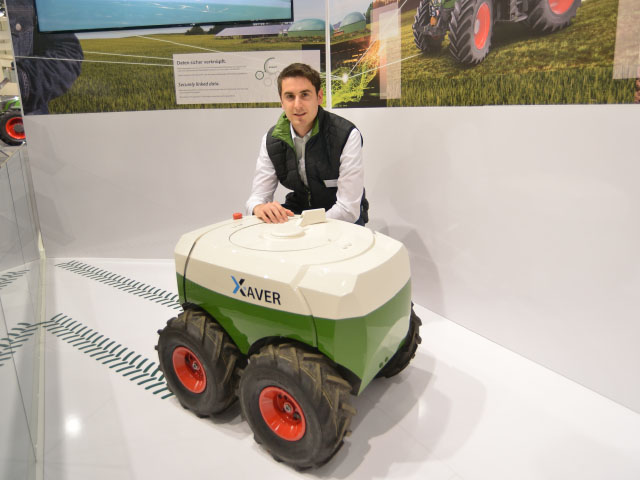