GRAND ISLAND, Neb. (DTN) -- With lower commodity prices and high yields on the horizon, some grain could be in bins longer than normal. That stored grain will require diligent management and regular monitoring to keep it in good condition, grain storage experts remind farmers.

Proper management is essential as grain quality can decline rapidly, and with farmers having larger grain bins in their on-farm storage facility, more bushels are at risk. Representatives from grain bin manufacturers and grain monitoring equipment companies present at Husker Harvest Days in Grand Island, Nebraska, all had the same message earlier this week.

First and foremost, farmers need to monitor their grain regularly. North Dakota State University Extension (NDSU) recommends checking grain every two weeks during fall until it cools for winter and then every two to four weeks during the winter.

Others, however, recommend watching grain more closely. Jay Birdsall, a salesman with Tri-States Grain Conditioning (TSGC) based in Spirit Lake, Iowa, said farmers need to check grain more often, about once a week.

"We need to pay attention to grain stored and not just put it into the bin and just walk away," Birdsall told DTN.

TSGC markets a line of grain-temperature-monitoring systems. The system includes temperature cables running every 6 feet, which give grain temperatures at different depths. In addition, monitoring can be either done directly with a small monitor or remotely by smartphone or other electronic devices.

Birdsall said it is important to monitor grain for changes in temperatures as warming grain can lead to problems such as mold or bug infestations.

Grain needs to be cooled down for safe long-term storage, according to Jeff Watson, regional sales manager for Custom Marketing Company (CMC), a grain storage and management company. To safely store grain, most would want the temperature of the grain to be 50 degrees Fahrenheit or lower.

When grain temperature stays below 50 degrees, corn can be stored at 15% moisture. But if the temperature is warmer, then the recommended storage moisture content for corn should be closer to 13.5%, Watson said.

Larger bins require the same management as smaller bins. The only difference is more bushels are at stake if proper management is not applied to these bigger bins, Watson said. Using technology and eliminating the guesswork on grain temperature is a way farmers with larger grain bins can make sure their grain quality stays in check, he said.

Watson said many potential bin customers, especially during times of lower commodity prices, want to cut corners where they can. They usually try to limit the amount of fans and vents they put on a bin. This is mistake, as exhaust vents and bin fans are needed to cool down grain to avoid issues with warm grain, he said.

"I would rather have too much air on the grain and too much horsepower to run fans than not enough," he said.

Aeration is important not only during the winter months but also into the spring and summer if grain is going to be stored that long, said John Hanig, bin sales director for Sukup Manufacturing Company. Rapid dry down and cooling is important after harvest, but for grain that could be stored longer, continued aeration is important, he said.

"We want to keep the grain as cool as possible, which is why we run fans during the winter months," Hanig said. "Aeration needs to continue in spring and summer, and running fans on cool evenings is a way to assure cool air gets to the grain."

Hanig believes some grain could be harvested this fall at higher moisture levels than in recent years. Wetter grain will require more management in storage than drier grain, he said.

Before grain even goes into the bin to be stored for months, it needs to be good shape. In a press release, Ken Hellevang, North Dakota State University Extension Service agricultural engineer, said good-quality grain will store better than low-quality grain.

"The outer layer of a grain kernel is the pericarp, or seed coat, and provides protection for the kernel," Hellevang said. "If the pericarp is damaged, the kernel is more susceptible to mold growth and insect infestations. This reduces the expected storage life of the grain."

Broken kernels and foreign material should be removed by cleaning the grain before storing it. Fines tend to accumulate in the middle and unloading some grain from the center of the bin will remove some of the fines and help level the grain in the bin.

Also, farmers should make sure the storage facility is clean and insects are not living in aeration equipment. NDSU recommends fumigating the empty bin to kill insects under the floor or in aeration ducts if an infestation occurred during the previous year.

"Controlling grain temperature is critical for maintaining grain quality," Hellevang said. "Insect reproduction is reduced below about 70 degrees, insects are dormant below about 50 degrees and insects are killed if grain is below 30 degrees for a few weeks." 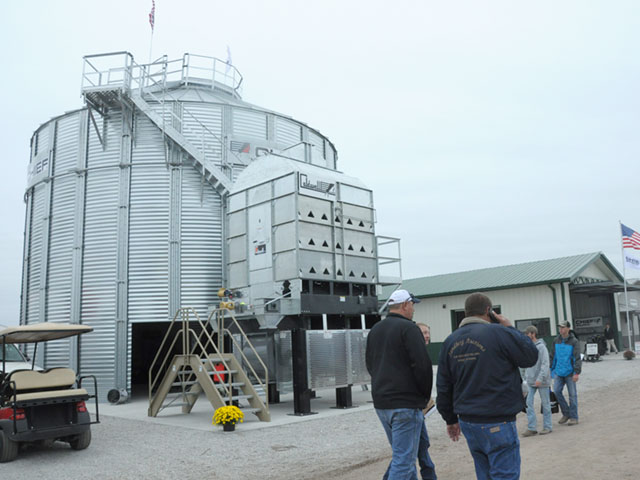