OMAHA (DTN) -- Ukrainian farmers continue to face a range of pressures trying to grow a crop in the midst of the war with Russia.

The damage to equipment and storage and lack of access to fuel and fertilizer will drop production forecasts for 2023, said Antonina Broyaka, an Extension associate in Agricultural Economics at Kansas State University.

Broyaka was a professor and researcher at a university in Ukraine before the invasion last year. She left Ukraine in March and accepted a position at K-State.

The following are some of the challenges the farmers face:

Broyaka cited statistics that Ukraine agriculture has suffered about $6.6 billion in losses. A big chunk of those losses includes roughly 84,200 pieces of destroyed farm machinery.

"We are working every day to replace what has been damaged but every day we have new bombings unfortunately," she said.

On top of that, Ukrainian farmers and agribusinesses have seen storage capacity for 9.4 million metric tons (mmt) of grain destroyed. More grain storage capacity is not accessible because it is in land controlled by Russia.

Overall, Ukrainian officials estimate the country has suffered as much as $136 billion in damage. Broyaka pointed out Russian bombs continue to target key infrastructure.

Fuel and transportation costs also have skyrocketed. Broyaka highlighted the cost to move grain to port is now triple what it was before the war.

"It makes no economic sense sometimes for farmers to harvest," she said.

"I don't see how farmers are getting paid for all of this work," he said. "When you figure out everything that is going on, they are in a tough situation."

Looking at winter crops, overall planted acres are down nearly 37% to a forecast of 14.12 million acres.

For the winter wheat crop, the largest chunk of acreage, planting is down 39% to 9.28 million acres.

These totals do not include some of the eastern provinces of Ukraine now under Russian control. Those areas were also some of the dominant regions for winter wheat production.

Looking at spring crops, Broyaka said Ukraine could expect a sharp decline in access to fertilizer. The forecast is farmers could see as much as 47% less nitrogen fertilizer for crops. She said that will translate into yield drops of 20% to 50%, depending on the crop and region.

Production of spring cereal grains could decline 44%, due partly to lack of fertilizer and partly because of lack of land. Broyaka said as much as 22% of arable land is not in use because of military action. That translates into nearly 9.4 million acres that won't be planted.

The agreement with the United Nations between Ukraine and Russia, as tenuous as it is, has gotten more grain and oilseeds out for exports. Ukraine exported 38.9 mmt total in 2022, which includes roughly 19.45 mmt through the ports from September through December. The Black Sea initiative accounts for about 17.7 mmt.

Hultman pointed out that Broyaka also showed the challenges of trying to get grain and oilseed out of the western parts of the country through rail or vehicles.

"They are really stuck with the Black Sea initiative to move anything," he said.

Credit is also a challenge. Ukrainian farmers look for a chance to expand access to credit. They also face problems with higher costs because of exchange rates.

The U.S. Agency for International Development (USAID) has offered some aid to farmers and households and some agricultural corporations are also offering support. On Thursday, USAID and Bayer announced they will donate vegetable seeds to help Ukraine. USAID and Bayer will first ship carrot seeds to supply as many as 25,000 family gardens or small farmers, "with priority given to farmers in newly liberated areas."

Bayer had already donated 40,000 bags of corn seed to the country and invested $35 million to boost seed-processing capacity in Ukraine.

For more on Ukraine's winter wheat crop and the impact on the U.S. crop, watch for this week's Todd's Take column. 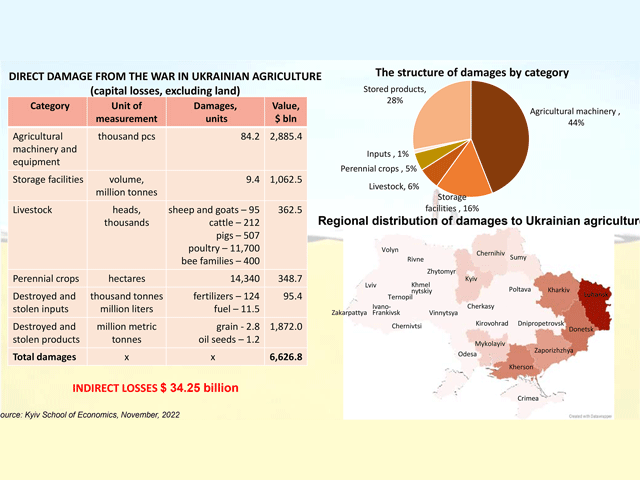