JEFFERSON CITY, Mo. (DTN) -- Across the Midwest, pastures slumber in winter dormancy, awaiting the return of warmth this spring. When those grasses and legumes do get growing again, they'll have company in the form of weedy species -- some of which will be new to the party.

Like college athletes who've entered the transfer portal, weeds are taking their "talents" to new states, posing fresh challenges for pasture management. DTN spoke to university weed scientists and extension agronomists across the Midwest to learn what weeds are on the rise in pastures. Here are the seven weed species the experts are keeping tabs on in their respective states this year:

1. Chinese fountain grass -- University of Missouri weed scientist Kevin Bradley said this perennial bunch grass has found its way into pastures in several counties in the Show-Me State. Cultivars of this grass are commonly sold in the landscape industry, but they aren't considered invasive due to a high degree of sterility. The same can't be said for Chinese fountain grass.

When mature, the bunch grass can grow 3.5 feet tall with distinctive "bottle brush" seedheads. These seeds can be spread on the wind, but they also can attach to clothing or the hair of livestock. The grass has a fibrous root system with rhizomes capable of producing new plants.

Bradley said it's his experience that livestock avoid Chinese fountain grass and will not graze it once it is past the seedling stage. He recommended proactively removing plants by all available means -- chemical and mechanical.

2. Knotroot foxtail -- Bradley's list of emerging pasture weeds in Missouri also includes this warm-season perennial grass, which has been a management challenge in other neighboring states such as Arkansas and Tennessee. Also known as knotroot bristlegrass, this foxtail poses a problem in tall fescue pastures, especially in the summer when growth of the cool-season fescue slows and the foxtail thrives. Its perennial nature also makes it more difficult to control than annual foxtails in stands of bermudagrass.

As the weed's name implies, knotroot foxtail produces knotty rhizomes from which the plant can send up more shoots even after herbicide application. The rough texture of the seedheads in hay can cause ulcers around the mouths of horses.

Currently, most recommended herbicide treatments provide only suppression for knotroot foxtail. The best way to combat the grassy weed is by maintaining a healthy stand of the pasture's forage grass through proper fertilization, liming and managed grazing. Clipping foxtail stems before the seeds are mature can help slow the spread of plants in the pasture.

"If you find it in a Missouri pasture, I'd like to know," Bradley added.

3. Poison hemlock -- To the east, weed scientists Aaron Hager at the University of Illinois and Bill Johnson at Purdue University both put this biennial weed species at the top of their watchlist.

"While not necessarily 'new,' poison hemlock appears to have spread rapidly across the state, becoming a challenging problem in more pasture areas," Hager said. "I never saw poison hemlock in eastern Illinois when I first moved here, but today, it's quite common."

Typically one of the first weeds to green up in the spring, poison hemlock develops into a basal rosette during its first year of growth. Then, it produces a vegetative stem and flowers during the second year, reaching heights up to 6 feet tall. The weed produces toxic chemicals that can poison livestock, especially cattle, horses and goats.

Several herbicides can be used effectively to control poison hemlock in pastures. The key to success is making the application when plants are young and in the rosette growth stage.

4. Smooth bedstraw -- Farther north in Wisconsin, extension weed specialist Mark Renz said that this weed -- more commonly found in the eastern United States -- is showing up in pockets in the Badger State.

"Once it gets in pastures, smooth bedstraw is hard to control," he said.

The perennial broadleaf weed is often described as opportunistic -- with good reason. Smooth bedstraw reproduces both by seed and vegetatively. It has a branching taproot but also produces woody rhizomes from which new stems can sprout. Plants can reach up to 3 feet tall and 3 feet or more in diameter with multiple stems. Seed can be spread by wind, rain and animals.

A well-managed pasture or hayfield is the best defense against a smooth bedstraw invasion. Should the weed appear, it's crucial to keep plants from going to seed for a year prior to any attempt to kill the perennial plants.

5. Johnsongrass -- As is happening in other states with other weeds, Renz is also dealing with this weed moving into his state from more southern locales.

"Historically, we haven't had any Johnsongrass this far north, but with changing climate and other factors, we just found a large population well established in southern Wisconsin," he said. "While it's not new to southern pastures, this would make management much more difficult in the upper Midwest."

The perennial grass weed can grow up to 8 feet tall, readily reproducing from rhizomes and seed. A single plant may produce more than 80,000 seeds in a single growing season.

Intensive grazing and mowing can be used to reduce Johnsongrass infestations in pastures. Doing so for at least two years will weaken and stunt the plants.

6. Spiny amaranth -- Iowa may be the No. 1 pork-producing state, but one "pig" not welcome is spiny amaranth or pigweed. Iowa State University field agronomist Virgil Schmitt said he took many calls about the weed this past fall.

"Like thistles, I think of spiny amaranth as being a symptom of less-than-great pasture weed management," he said.

While it looks like other pigweeds from a distance, at the base of most of the leaf petioles, spiny amaranth has a pair of spines that discourage grazing around the plants. A prodigious seed producer, a single plant can yield more than 100,000 seeds. The weed can grow to 5 feet tall, but for chemical controls to be effective, application should occur while the plant is no more than 4 to 6 inches tall.

The plant appears as a low-lying rosette with a thick taproot in the first year of growth. In the second year, spotted knapweed bolts, producing branching stems that can be 2 to 4 feet tall. The weed produces a chemical that is toxic to other plants, reducing competition and allowing it to spread quickly.

Like other weeds on this list, spotted knapweed control is most effective when done early and before seed sets. Mowing, herbicide application and grazing by sheep and goats can all provide some control. 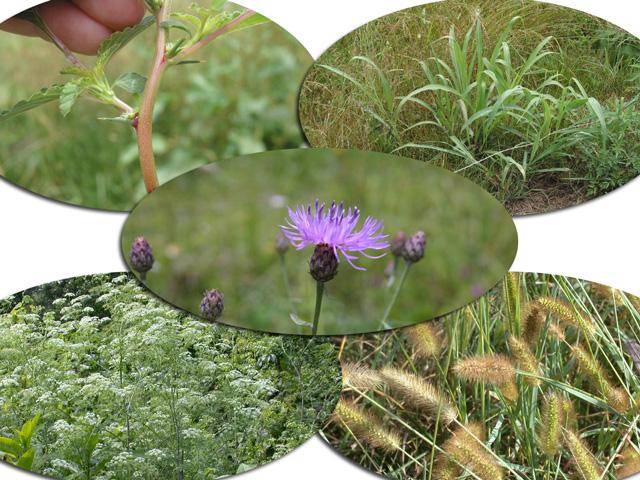