La Nina is starting its decline. The main driver of weather across North America the last two winters, three if you include the current one, is going to slowly lose its grip on the country during the next few months.

La Nina's effects will linger well into spring. However, with more neutral conditions expected during the summer, North America will be losing its largest driver of weather. In its place should be a more chaotic weather pattern, one that ends up being more "normal" than what we have seen during the last few years.

During the cold season, the La Nina pattern favors arctic shots, especially across the North-Central U.S. and most of Canada as well as a clipper pattern that brings only limited precipitation, though sometimes in quick succession, to these same areas. Farther south, warm and drier conditions are favored.

This winter has not started out with that pattern.

December was decidedly cold across most of the country, culminating in a visit from the polar vortex around Christmas. But it was also relatively active with several large systems moving through the country -- atypical during La Nina conditions. Large storms produced widespread heavy snow in the Northern Plains and Upper Midwest and severe weather across the South and Southeast.

January is also not following the typical La Nina pattern. Warm for the first three weeks across most of the country and very wet across the West with an active southern storm track, this looks more like the opposite -- El Nino. But rest assured, by the end of January and heading into February, we should get a visit from the polar vortex yet again, with another arctic blast and a clipper setup expected.

The typical pattern is being forecast through March, and into April as well, as the dying La Nina influences our weather into the start of planting season across the United States.

Some of these cold shots will flow deep into the south, some of them won't. But when they do, they have the potential to bring more wintry precipitation to the southern states and we should expect a higher risk for the rest of the cold season.

During the latter half of spring and through summer, conditions in the tropical Pacific Ocean should head from the cold side of neutral to the warm side, potentially even knocking on the door of El Nino conditions by the end of summer.

There are questions on that potential, but one thing is expected: the driver of large-scale weather patterns across North America will be missing and smaller scale processes will have a much larger influence.

These sorts of things include ocean temperatures elsewhere in the world, significant tropical storms, and an area of thunderstorms that circles the equator in relation to the Madden-Julien Oscillation (MJO).

The MJO may actually be the main weather driver across North America come summer. All of these features are hard to predict more than a couple of weeks in advance. But looking at previous years of coming out of La Nina and into neutral or warm-neutral conditions during summer, most of these years did not show a consistent signal for areas of wetness or dryness.

In other words, the typical summer thunderstorms will likely roll across the country, which have been diminished during the last two seasons. There will be some winners and losers out of these storms, but picking where those will occur is not obvious.

Temperatures are harder to predict. Overall, with trends in recent decades for warmer summers, especially with higher overnight low temperatures, the forecast and models point to warmer conditions overall. But as we look at some of those past years of coming out of La Nina and the temperatures that occurred, there is a lot more variability. Some years had hot summers; some years had cold summers. Nearly none of them were particularly neutral for any significant growing areas, so we could see either. There should be more variability.

Variability should be the word for the main growing season. This variability, though, should allow for better participation from Western Corn Belt states to the total production for this year's corn and soybeans than in the previous two years where conditions were not as great. But it will likely leave some areas with poorer growing conditions as well.

Overall, though, growing seasons after the end of La Nina typically do alright on a national production scale. DTN Ag Meteorologist Emeritus Bryce Anderson wrote about such occurrences in his recent blog here: https://www.dtnpf.com/….

Here is a breakdown of the conditions expected for each main crop's cycle.

The winter crop went dormant in mostly good condition during the fall and winter. Recent heavy precipitation has led to an above-normal snowpack across most of the region. This should bring soil moisture to adequate or abundant levels when the winter crop breaks dormancy and the spring crop is planted.

The likelihood of heatwaves is reduced this year as opposed to the last two years, but not impossible. The effects would be most damaging to spring wheat as winter wheat should have more available soil moisture earlier in the year. Near-normal precipitation in the summer may give periodic boosts to soil moisture for spring wheat, perhaps at opportune times to negate any ill-effects from heat.

The crop went dormant in mostly good condition during the fall and winter. Visits from the polar vortex in December may have caused some damage to exposed areas, however. There are risks of more of these cold shots through April and late frosts will be possible across the north, which may also cause some damage.

Recent precipitation has increased soil moisture across the region and La Nina will favor additional good precipitation through the late winter and early spring. That should set up the crop in good condition.

The weather pattern during the latter half of the season should start to warm up and precipitation will be variable. It is unknown if the good soil moisture from the spring will be enough to carry it through for areas that are on the lower end of rainfall, or where those areas may occur.

Tough conditions in the south continue through the entire season. A visit from the polar vortex over exposed wheat in Kansas, Colorado, and points south may have led to some winterkill. Precipitation continues to be hard to come by this winter and will take big storm systems that dig south into the southern Rockies to pull up enough moisture to get good rain and snow during the spring. These have a low-probability during La Nina-controlled springs.

The pattern is forecast to turn warm-to-hot for the late spring and early summer fill periods. With limited soil moisture, crop conditions are likely to be poor throughout the season and another difficult year of production is expected.

Farther north, snowfall has been near or significantly above normal across most of the area. La Nina will continue to favor clippers bringing at least near-normal snowfall for the rest of winter into the middle of spring. It will also favor cold conditions from February through April.

The crop may be slow to awaken from dormancy but is likely to find at least decent soil moisture when it does. Late-season frosts after dormancy breaks could cause some damage as in recent years. Typical summertime showers are expected, but that may be too late for some of the crop if it awakens early.

Recent precipitation has led to a good buildup of snowpack in the Dakotas, but not the Prairies or Montana. La Nina should lead to more clippers that could bring at least decent snowpack for spring soil moisture, but also delayed spring warmth. We may come out of that pattern into a warmer one starting in May that could continue through August. However, the flip side may also be true as having a colder summer as well.

There is precedent of having a cold summer after the end of La Nina just as much as having heat. Rainfall patterns should return more toward normal regardless, indicating better chances for more areas to receive good rainfall than in recent years. But, as is typical of summertime thunderstorms, there will be areas that are left without, and some areas will end up in drought yet again.

La Nina's influence should bring more clippers through this winter and the front half of spring. That favors somewhat drier conditions in the northwest, but heavier rain and sometimes snow for the Delta and Ohio Valley. Shots of cold air could limit early planting in some areas depending on the timing and when farmers prefer to plant.

A return to a typical summer is expected. Waves of heat and opportunities for relief should exist. There is precedent for either of the two winning out during the course of the summer. The DTN forecast favors somewhat warmer conditions during the summer, but that does not mean that heat will be a concern for every or any area. Variability between the two is likely to exist, including for the Western Corn Belt and Delta that dealt with extreme heat concerns the last two seasons.

Precipitation patterns should return to something resembling normal as well. Thunderstorm clusters and systems should look more like we typically see during the summer than the previous two years of favoring the eastern half of the Corn Belt.

This will mean there are winners and losers out of the pattern, but it is undetermined where the drier conditions will occur. The DTN forecast favors the southern Corn Belt states of Kansas and Missouri -- but could happen in parts of other states as well, or instead.

What is more optimistic is getting normal rainfall over the Western Corn Belt, which has not happened during the last two years of La Nina's influence. 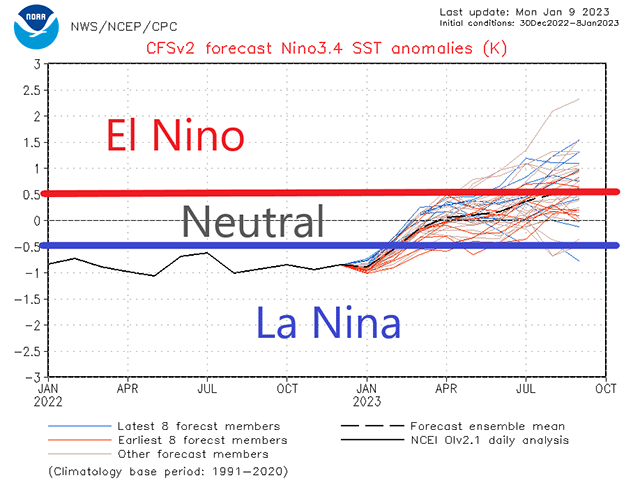