ANKENY, Iowa (DTN) -– Farmers are beginning to focus on fall fertilizer applications as harvest heads into the home stretch. With the possibility that prices of already-expensive nutrients may be higher in the spring, Emerson Nafziger expects to see plenty of anhydrous tanks and dry spreaders in recently harvested fields.

Nafziger, University of Illinois professor emeritus, encourages farmers to take several steps to get the biggest bang out of their fertilizer bucks. Top of his list includes making use of recent corn nitrogen (N) trials when making nitrogen rate decisions, using research-based nutrient calculation tools such as the Maximum Return to Nitrogen (MRTN) calculator and including all forms of applied nitrogen when arriving at a field's final rate.

The average price of anhydrous ammonia during the second week of October topped $1,400 per ton, according to the latest DTN Fertilizer Index. MAP and DAP are well over $900 per ton and other N fertilizers are expensive as well. Read DTN's latest fertilizer price story at www.dtnpf.com/agriculture/web/ag/crops/article/2022/10/25/five-eight-fertilizer-prices-lower-0.

"Fall nitrogen applications are probably going to be pretty substantial this year, with the (fertilizer and corn price) uncertainty in the spring compared to what it is now," Nafziger told DTN. "I want people to think about the nitrogen they're applying. Some apply too much … and spend money that has no return."

He said concerns about spring fertilizer shortages and prices are a reason to apply now. Dayton, Iowa, farmer Kellie Blair inquired at her local cooperative about anhydrous ammonia availability this fall, which she historically hasn't done. She was told the fertilizer was only available to those who paid for it ahead of time, which she didn't do.

"The co-op was only given so much anhydrous this fall, but they said it will be available in the spring," Blair said. "Prices are pretty high anyway, so we are looking at other forms of pre-plant nitrogen in the spring like urea and AMS. We will finish up by sidedressing anhydrous."

WITH N, LESS MAY BE MORE

The researcher believes corn, for the most part, didn't run out of N this year. And, in some cases, too much was applied. Here's why:

-- Nafziger noticed that a lot of corn stayed green up to maturity.

Nafziger said some left-over N will be used by microbes to break down corn residue, but it's unclear how much of it will stay in fields.

"The pattern of dryness this year was not one that suggested that the 2022 crop would have yielded more if more N had been applied," Nafziger said. "It's a good reminder that we don't often help ourselves if we react to what happened one year by changing what we do the next."

Nafziger's latest N research and thoughts about next year's N needs can be found at https://farmdoc.illinois.edu/….

Based on field observations and N research data this year, Nafziger recently wrote: "There is no reason to believe that the 2023 corn crop will need extra N or that we need to 'load up' this fall even if we believe that the price of N will be higher next spring."

Nafziger said if farmers apply N this fall, he recommends only applying a portion of next year's needs due to price uncertainty of fertilizer and corn. Also, include a nitrification inhibitor with fall anhydrous ammonia.

He suggests using the MRTN calculator to help decide how much N to apply overall, and consequently this fall. Find the MRTN calculator at http://cnrc.agron.iastate.edu/…. Corn growers in Minnesota, Wisconsin, Illinois, Indiana, Iowa, Michigan and Ohio can input data on the previous crop, corn price and N price to find the optimum N application rate and range. The calculator uses decades of N research trial data from each state or region within a state. The N tool is continually updated with new data.

"If nothing else, (the calculator's target rate) might encourage people not to use too much," Nafziger said. "We know that most people are reluctant to cut nitrogen rates, but high N prices coupled with high N rates in years like 2022, when yields were high with only modest N rates, can mean real losses."

Farmers that apply this fall need to include N content from all fertilizers used in their overall N target to avoid over-application in 2023, Nafziger insisted.

"October has been on the cool side and dry, so MAP and DAP nitrate conversion is not taking off very fast. If you put on 200 pounds of DAP per acre that 36 pounds of N should be counted into total N," he said.

Nafziger also said UAN as a herbicide carrier, N applied with the planter or N sidedress applications need to be included in the overall N target.

Farmers need to consider lowering the N rate this fall to provide more flexibility to adjust N rates in 2023 based on the price of N, expected corn prices and the weather, he added.

"It's been dry, so we may be able to get by with 50 units less next year," Plagge said. "Nitrate tests will likely be a big part of our plan if corn prices come down and we need to start pinching pennies."

Nafziger has noticed a large amount of tillage being done on recently harvested soybean fields. "I'm baffled a little bit by that," he said given that tilled soils with less cover are more prone to wind and water erosion.

He also said dry soil after tillage may not do a good job of holding anhydrous ammonia that's injected this fall. Ammonia is more prone to escape if soils stay dry. Recent rain should help minimize that concern, though.

If anhydrous ammonia is applied to dry soil, especially if it's been tilled, Nafziger recommends injecting a little deeper into soil that is moister. 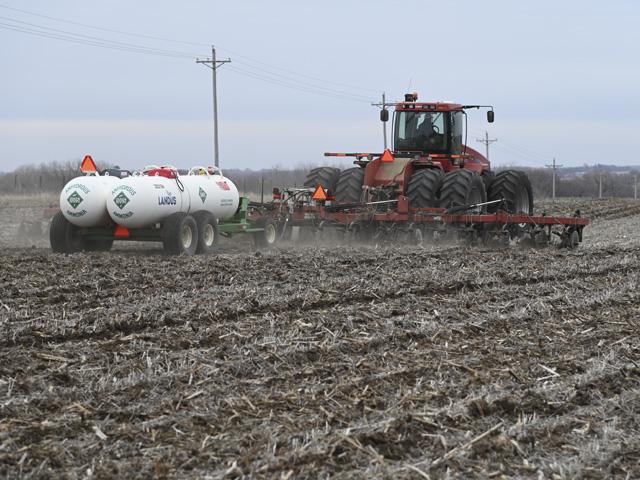