September proved to be a somewhat subdued month in the U.S. for ammonia, phosphate and potash markets as harvest on the summer corn crop crept along behind the average pace of the previous five years, according to USDA. With a majority of 2022 Midwestern corn still in the field, fall applications had yet to take off in much of the country last month, and local demand was proportionally slower.

The following is a recap of fertilizer price trends and market developments for the month of September.


Domestic: September proved to be a somewhat subdued month in the U.S. ammonia market, as harvest of the summer corn crop crept along behind the average pace of the previous five years, according to USDA. With a majority of 2022 Midwestern corn still in the field, ammonia applications had yet to take off in much of the country last month, and demand was proportionally slow.

That did not stop prices from appreciating, however, alongside rising ammonia prices globally in late August/early September with further bullish news out of Europe -- including more cuts to production at fertilizer plants -- that brought new offer levels higher. By the end of the month, Corn Belt ammonia prices had jumped $300-$400 per short ton (t) from August up to current levels of $1,300-$1,400 free-on-board (FOB -- or sales price per ton of ammonia without transportation costs) in the Midwest.

Rail shipments saw a short interruption in September due to the narrowly avoided rail worker strike as unions negotiated new contract terms, and hazardous material shipments (including ammonia) were halted for about one week. Shipments have since resumed after a tentative deal was reached with most rail worker unions, but new developments have necessitated another round of negotiations with a deadline in mid-November.

Fertecon expects U.S. ammonia pricing to remain stable with potential to firm if fall tons are applied in large volumes in the remainder of 2022, pending cooperation from the weather over the next few weeks.

International: The import market for ammonia in northwest Europe slowed in late September as participants assessed the potential impact of the Nord Stream pipeline leaks on gas prices in the region and ammonia production costs. The Dutch TTF month-ahead price, having in September dipped to a two-month low, climbed once more following reports of damage to and subsequent leaks from the Nord Stream and Nord Stream 2 natural gas pipelines that run from Russia to Germany.

Yara and Mosaic settled for October Tampa ammonia shipments at $1,175 per metric ton (mt) cost-and-freight (CFR -- sales price with shipping costs included). This is up $25 on the $1,150 CFR Tampa agreed for September but falls short of earlier expectations from the market.

Baltic and Black Sea ammonia continue to be assessed nominally, as armed conflict in eastern Europe continues to hamper ammonia supplies leaving the region. The Baltic region was seen $980-$1,035 FOB, about $50/t higher versus the median price in September, and ammonia values in the Black Sea were assessed similarly higher to $1,030-$1,070/mt FOB.

Global ammonia pricing was seen firmer in the Western Hemisphere and pull-on supply providing support to FOB prices in the east in Asia.


Domestic: Urea prices in September were still subject to the whims of the international and barge trading markets, owed to the slow pace of out-of-season demand for urea. The latest India tender came and went, and once it was complete, prices softened with little other excitement for traders besides the ongoing natural gas crisis in Europe and its associated nitrogen fertilizer production curtailments.

Fertecon assessed New Orleans, Louisiana, (NOLA) granular urea barges from $600-$635/t FOB in the last week of September, down from high trades at the end of August at $685. Due to a volatile trading week to end the earlier month, however, the median price was largely stable month-over-month ($617 in September vs. $622 in August).

River terminal urea prices proved more stable than barges with farmer and wholesaler demand at a minimal level but overall, still followed price movement at NOLA. Looking at a few of the major hub markets -- including St. Louis, Missouri; Inola, Oklahoma; and Cincinnati, Ohio -- terminal urea in September ended the month in a range of $660-$680/t FOB, about $30-$50 lower from August.

Hurricane Ian at the end of the month proved to have little initial effect on fertilizer prices, as its path of destruction spared production sites in Texas and Louisiana. A more pressing issue that emerged was the degree to which Mississippi River water levels have dropped, significantly affecting the transport of both grains and fertilizer.

While we are still far away from spring, urea prices are expected to remain most influenced by NOLA barge trades as well as price movement in Egypt and Brazil. Our price outlook is stable to softer in the short term.

International: Last month, India made a much-anticipated return to the urea market with a purchase tender that closed on Sept. 9, and global markets had mixed messages when RCF received acceptances for the delivery of 874,000 t urea at $675-$668/mt CFR. Prices were lower than previous levels, while at the same time, acceptances fell short of the 1 million metric tons (mmt) to 1.2 mmt it had been seeking.

Following the tender's conclusion and initial support of price levels, sales activity slowed and offers took a softer tone in anticipation of another India tender, which is expected to be announced in the second half of October.

At the end of September, Fertecon assessed the Egypt price at $785-$805/mt FOB, higher compared to $750-$820 in August on higher netbacks to the European market as nitrogen fertilizer production including urea remains slashed. Brazilian urea prices were assessed at $630-$675/mt CFR in September, up from $540-$580 in August despite little buying activity over the past month.

Demand in Brazil is expected to pick up in October as buying levels were behind compared to last year. Near-term price weakness appears likely as buyers remain cautious and sellers grow nervous over unsold inventories. Buyers are still looking for price direction, which could come with the next Indian tender expected later this month.


In September, the 2022 TFI Annual conference was held in Dallas, Texas, where much of the discussion focused on the nitrogen market, including the market conditions across Europe, Ukraine and Russia as well as heavier U.S. export flows of ammonia and UAN. The U.S. market is still taking second priority to exporting, it seems, as offers continue to rise for the few tons that are available. Sellers are said to be biddable for volume with little incentive now to be aggressive in the local market.

Last month saw the pace of exports to Europe still strong, and domestic offers have been more difficult to come by due to the overwhelming volume of UAN being shipped abroad.

UAN barges at NOLA were assessed at $550-$560/t FOB, up more than $100/t from trades at $420-$440 in August due to the reduced barge availability in the U.S. as discussed above and the only viable offers listed from resellers at steadily climbing prices.

Higher trades for secondhand tons at river terminal hub markets followed the firming NOLA market, with new sales done in the $585-$600/t FOB range on the Ohio River for 32% UAN. Previous offers during summer fill were last heard from $435-$440/t FOB in July, or around the same time that UAN export volumes began to attract a lot of attention.

Demand in Europe may slow as tanks fill and previously booked orders are shipped, which could bring an opportunity later for buyers if local UAN production begins to build up again. If the pull of product to overseas markets does slow, we could see prices at home start to descend once again.

On the other hand, if European demand continues and world buyers continue to seek non-Russian fertilizers, UAN and other U.S. nitrate prices could see continued bullish support.


Domestic: Phosphates in the U.S. saw less export interest in September, which brought a generally softer tone to the market, although reduced output from Mosaic at the end of the month due to Hurricane Ian temporarily shuttering Florida production served to provide some last-minute support to barge prices.

While demand remained generally slower ahead of some expected post-harvest applications later in the season, thinner availability has helped to support trade values. Higher prices were also achieved by Mosaic ahead of Hurricane Ian's arrival in Florida before the company pulled all its offers.

River terminal DAP prices improved despite the even pricing seen at NOLA at $790-$820 FOB DAP, or about $15 higher from August offers. MAP offers in September ended at $810-$820 marginally higher than the $805-$815 reported in the month prior.

It is possible that the slipping MAP prices are owed to some sub-market level trading in order to formula-price imported volumes. However, a glut of supply is the cause for the overall weakness across phosphate markets, and our expectation in the short term is for prices to remain stable to softer. Hampered spot barge access in October, however, could potentially support prices if terminals and other interior U.S. markets cannot source replacement volumes for any post-harvest application consumption.

International: September was a month of price weakness in the global phosphate market. Prompt availability in South Asia weighed on prices to the east, and the Western Hemisphere followed suit. Both the U.S. and Brazil saw low phosphate demand in September with stocks reported extremely high in the latter, while here at home, a slow pace to the fall harvest pushed fertilizer applications -- and thus phosphate demand -- later into the year.

A lack of demand on negative price sentiment has also pushed prices for phosphates lower, with MAP values in Brazil declining to $690-$700/mt CFR on inactivity -- $100 lower than where prices were at the end of August.

India had fallen quiet following recent weeks of activity, apart from finalizing DAP cargoes under long-term contracts at the end of September. DAP prices in the country ended the month at $720-$750/mt CFR, sharply lower from the $856-$890 seen in August and $200 down from July's highest prices.

The short-term outlook for global phosphate prices is under pressure. The high level of stocks at Brazilian ports is reportedly such a pressing problem that incoming fertilizer vessels are being diverted to other markets, pointing toward further softening on values in the coming weeks.


Similar to phosphates and ammonia, potash suffered from a slow harvest in September having not yet cleared through older warehouse inventories and offers continued to fall over the month in order entice any buyers ahead of any late-year application runs.

NOLA potash barge prices fell to $574/t FOB, down from $645-$655 in the previous monthly column. The market has not yet shifted into high gear for the fall demand period from the late-summer doldrums, with some predicting that fourth-quarter 2022 will be a heavier interval for potash applications due to the weaker spring sales earlier this year.

River terminal pricing fell approximately $40 from August to $670-$700/t FOB last month, with supplies positioned seen as ample for the limited demand ahead of harvest completion. The fall run will additionally hinge on cooperation with the weather, namely whether conditions following the harvest will allow for preplant applications before wintery weather starts in force.

The global market will likely remain dormant for some time, until early next year when it is time again to settle large supply contracts. The continued majority-absence of Belarus potash in the U.S. has also not had significant implications for prices due to the aforementioned high stocks in warehouses. Increased production at Canadian mines from Nutrien and Mosaic appears to have filled in any availability shortfalls that might have surfaced.

In the short term, we see U.S. potash prices as stable to soft, with potential for some support related to fall demand. 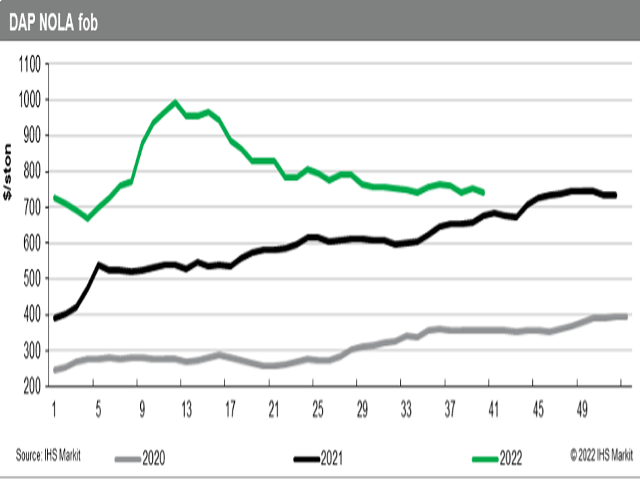