JEFFERSON CITY, Mo. (DTN) -- For at least the third time in seven growing seasons, officials in Iowa have identified the presence of an invasive weed species. And for the third time, its presence has puzzled scientists.

Asian copperleaf, a species native to China, Australia and Japan, was first identified in New York in 1990. Yet, its presence elsewhere in North America was not documented until 2016 when it was discovered in a seed corn field in Black Hawk County, Iowa.

Like a weedy Houdini, Asian copperleaf then seemingly disappeared, only to reappear two years later in another seed corn field some five counties farther west. This year, the weed was identified in a soybean field in Grundy County -- nearly 30 miles away from the 2016 infestation.

"It's a great mystery," said Robin Pruisner, Entomology and Plant Science Bureau chief for the Iowa Department of Agriculture and Land Stewardship. "In 2016, we worked with the seed company and the producer in trying to find any links to the New York infestation, and there were just no links there. It's the same this fall. There are no apparent links at all between the producers in Black Hawk and Grundy."

Meaghan Anderson, a field agronomist at Iowa State University, said the weed's presence is cause for some concern. In its native range, Asian copperleaf is a threat to row crops, and two sources note that populations of the weed have shown resistance to Group 9 and Group 14 herbicides.

"We're definitely wondering about resistance," she said. "Is this plant emerging late underneath the canopy? Does it survive well in shade and doesn't mind the competition? Or is it surviving through herbicide application? That's a big question that we're not sure about."

In a risk analysis released in 2012, USDA stated that Asian copperleaf did not show "any strong invasive or weediness" characteristics. However, the agency classified the plant as "high risk" due to a high level of uncertainty.

Asian copperleaf can reach heights of 2 to 3 feet, but most of the plants in Iowa were less than knee-high, Pruisner said. While it is a member of the spurge family that includes other annual weeds such as Virginia copperleaf and three-seeded mercury, what distinguishes Asian copperleaf are the bracts located beneath the flowers. These modified leaves are circular to heart-shaped with a dentate margin. The plant's leaves are 2 to 3 inches long and lanceolate with finely toothed edges.

As harvest continues, farmers are asked to be on the lookout for the weed species, Anderson said. If a grower sees a thick mat of plant material growing underneath the crop canopy, it should be investigated.

Those who suspect an infestation of Asian copperleaf in their fields should call the Iowa Department of Agriculture and Land Stewardship at 515-725-1470 or email entomology@iowaagriculture.gov.

"Agronomically, we don't know what we're looking at in terms of potential for yield loss and things like that," Pruisner said. "But any time we can get ahead of a weed before it gets ahead of us, that is definitely the way to go." 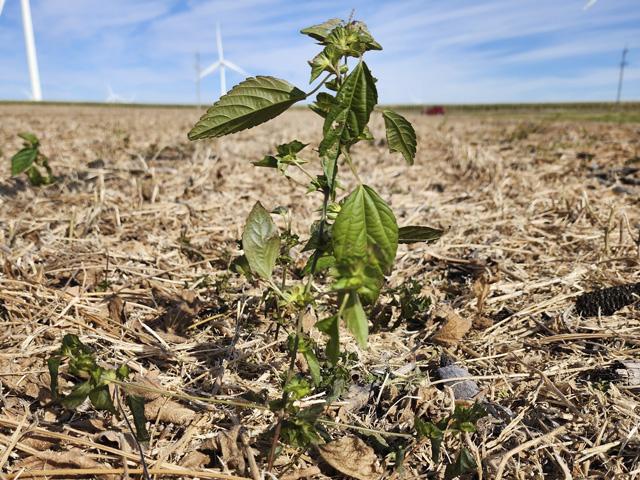