Gro's yield models update daily as new data becomes available, and as of Sept. 8, the national average corn yield was 170 bushels per acre (bpa), while the soybean yield estimate was 48.4 bpa.

"I think 170 bpa is probably close to what the trade is actually anticipating for a final yield," DTN Lead Analyst Todd Hultman said.

Both of Gro's estimates are lower than USDA's August estimates, which came in at 175.4 bpa for corn and 51.9 bpa for soybeans. USDA's National Agricultural Statistics Service will release its updated crop production and yield estimates on Monday, Sept. 12, at 11 a.m. CDT. Those estimates will incorporate field data for the first time as well as input from farmers.

"The USDA is really high, I would say, relative to what we've been talking about and what we've been seeing," Gro Intelligence Senior Analyst John Haines said. "I'm expecting them to come down and come closer to where we are, but they're probably going to do it more slowly. They just have a different methodology. They don't like to move things around a lot. So, I'd expect a step change in the direction of our models."

According to a Dow Jones survey, analysts expect corn yields to come in at 172.4 bpa and soybean yields at 51.5 bpa (https://www.dtnpf.com/…).

Haines said there are two driving factors behind rising corn yield expectations, and both have to do with the evolution of the underlying data.

In August, the Global Forecast System, which is also referred to as the GFS model or the American weather model, called for very hot temperatures for the month of August relative to other forecasts. But that heat didn't materialize.

"So, at the end of July/early August time period, there was still some risk in the model," Haines said. Land surface temperatures, another related variable in Gro's models, weren't as high as forecast, so yield potential improved.

Another factor is this year's normalized difference vegetation index (NDVI) pattern, Haines said. NDVI maps measure the comparative lushness or dryness of a field relative to average conditions. These values tend to peak in August before falling as the crop matures and turns color.

"The structure of that curve is different this year," Haines said, adding that it was similar to 2019, another season marred by late planting. This year, springtime delays got the NDVI off to a slow start. It ran behind average most of the year and never really hit a seasonal peak. Instead, it's held relatively steady.

"That's why we're seeing some later improvement in yields, a bit more optimism than we did during the crop tour, but still, overall, not a great year," he said. The 2022 DTN Digital Yield Tour, powered by Gro Intelligence, examined growing conditions in 10 corn and soybean growing states from Aug. 8-12.

Gro Intelligence Senior Analyst Mintak Joo said some states saw sizeable changes over the past month. Illinois and Indiana's statewide average yields increased by 8 bpa to 205.2 and 188.3 bpa, respectively. Iowa saw an even bigger bump -- 14.4 bpa -- to 196.1. In states plagued by drought, corn yields dropped over the past month or barely held steady. A table showing statewide yield averages and how they've changed since August is below.

DTN Ag Meteorologist John Baranick said it's been a hot and dry summer overall, with many parts of the Corn Belt falling in and out of drought while Kansas, Nebraska and South Dakota caught minimal relief from hot and dry conditions.

"In late July and through August, we finally saw a few cold fronts come through that brought some longer periods of milder temperatures and produced more widespread rainfall into portions of the southern Corn Belt," Baranick said.

"Given the harsh June and July conditions, I'm not surprised to see corn numbers well below expectations at the beginning of the year. I am a little more surprised at the soybean numbers, considering there were some decent rains in several areas. But as the Gro Intelligence analysts indicated, it must have been just enough to offset the heat, instead of bringing the crop around."

Joo said even though much of the Corn Belt received timely rains in August -- a key time in the plant's development -- hot temperatures depleted topsoil moisture levels.

"When we look at more granular weather data like daily soil moisture, it has been pretty low. I think that's why, at least in our models, we're not seeing a big jump in soybean yields," Joo said. 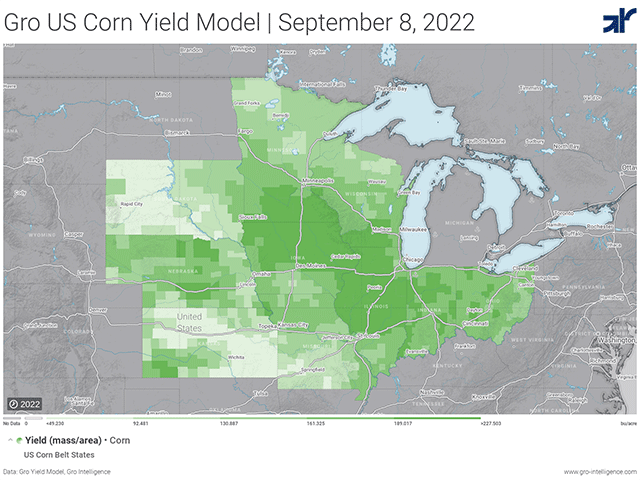