DECATUR, Ill. (DTN) -- Corn ears tell a tale this time of year. Peel back husks and those missing kernels at the end of the ear, often called tip back, stick out like a sore thumb.

With heightened market and weather uncertainty, tip back has become a theme this year as farmers and crop scouts head to the field to attempt to estimate yields prior to harvest. Purdue University corn specialist Dan Quinn said his phone has been ringing steadily with questions on tip back and what it means over the past few weeks.

Not all tip back is necessarily bad. What's lost isn't as important as what remains on the ear when it comes to final yield, Quinn said.

The highly variable 2022 planting and growing season make it difficult to pin down reasons for those barren tips, Quinn observed. "Mostly what we are seeing here in Indiana is kernel abortion resulting from stress one to two weeks after pollination," he said.

In the case of kernel abortion where the kernels were fertilized but stopped developing, you tend to see shrinking kernels and a bit of the yellow embryo remaining. "Generally, that's what we observe when the plant just didn't have enough resources during the grain fill period to continue filling that ear," Quinn said.

By contrast, missing kernels because of drought or other stressors such as high temperatures during pollination typically lead to no kernel set at all. The kernels are simply missing, he added.

Silk elongation begins near the butt of the ear and progresses toward the tip. "The tip silks are the last to emerge, and therefore, those kernels are also the last to fill. It also means they are the most sensitive to stress," Quinn said.

Stressors that cause tip back can be almost anything, he said. "Hot and dry conditions are probably the biggest culprit, and I think that's a lot of what we are seeing in this state this year," Quinn said. "But everything from consecutive cloudy days that impact solar radiation or nitrogen deficiency due to flooding conditions can cause enough stress to limit that the corn plant's ability to be a photosynthetic factory."

Todd Burrus, with the Illinois-based Burrus Seed Company, wrote on Aug. 24, 2022, that now is the prime time to see tip back before cobs and tips start shrinking back in the coming month during dry down. "The reality is the plant is expected to support more kernels that it can complete ... Not every kernel will make it to the finish line," he wrote.

Hybrids will exhibit genetic differences to stress too, he said. And timing of the key stress may trigger different responses. "Realize if that stress point is eliminated, the product with more tip back may have been the winner in other locations or seasons. Imagine two people taking off running in the heat. One will inevitably go farther than the other. The reasons for this can be limitless," he said.

High-yield growers will even say they leave yield on the table if ears are filled completely to the tip. A half-inch or so of tip back can be a sign that plant populations are dialed in for some growers, Quinn agreed.

Still, Quinn urges all farmers to get out and pull some ears to check on the progress of kernel fill.

"Farmers might be surprised after doing some yield assessments how much is out there, even if they see some tip back," Quinn said. "Ear size is determined around V6 through V15 or until a few weeks prior to pollination. Many of those fields that were challenged this year may still have some decent ear sizes.

"The lost yield potential for every absent kernel per row on an 18-row corn hybrid (assuming a final ear count of 28,000 ears per acre), equals about 6 bushels per acre," Quinn said. "So, yes, yield loss from barren tips can add up."

However, he points to a bulletin (https://www.agry.purdue.edu/…) written by Bob Nielsen, Purdue University corn specialist emeritus, that indicates kernel count for harvested ears of many hybrids is approximately 600. Hybrids whose ears are typically 16 rows in girth tend to set about 36 to 40 kernels on each row, while those that typically develop 20 rows of kernels around tend to set closer to 30 kernels per row.

"If potential ear size (number of ovules) was quite large heading into pollination (favorable pre-pollination conditions) but failed to pollinate the tip silks, the resulting ears may still exhibit 30 to 40 kernels per row even though there is 1 to 2 inches of barren tip. In other words, harvested ear size will still average about 600 kernels, and ultimate grain yield will be average to above average.

"On the other hand, if kernel counts show only 20 to 25 kernels per row with lengthy barren cob tips, then that indeed indicates that the crop suffered significant stress conditions, probably more than once during the season. Kernel counts per ear will be much less than 600, and ultimate grain yield in this latter example will likely be less than average for that field and/or hybrid," Nielsen wrote.

There's no way to improve kernel numbers this late in the season. The question is what happens now to what is left. "Let's hope temperatures behave and we can stretch that grain fill period a little longer to keep filling what's out there," Quinn said.

Monitoring fields with tip back from now until harvest is a good idea, added Burrus. Plants short on resources for full reproduction often rob these resources from the rest of the plant and compromise standability.

For more information on tip back go to: https://www.dtnpf.com/…. 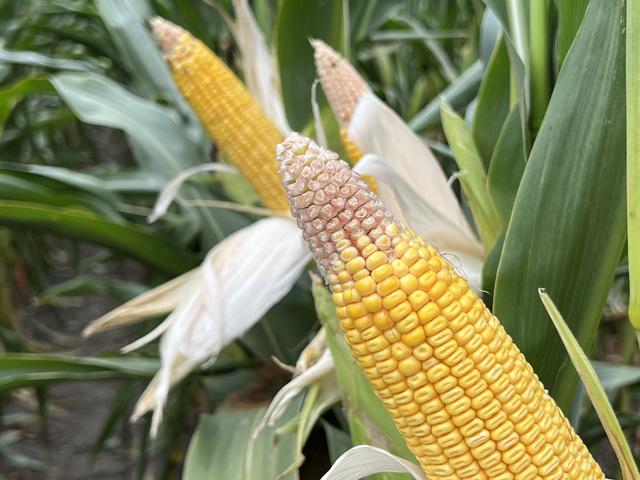