LINCOLN, Neb. (DTN) -- When you think of NASA, your mental images likely are of lunar landings, space shuttle launches and rovers on Mars. A little-known fact, however, is that NASA plays a significant role in studying Earth through satellite technology and helping develop technology to give farmers better tools.

Speaking during the Heuermann lecture, "Space for Ag: NASA Satellites and Science to Support Food and Water Security" at the University of Nebraska-Lincoln on Monday, Karen St. Germain, director of NASA's earth sciences division, said NASA currently has about 25 satellite and/or space missions taking pictures of Earth and measuring precipitation in the atmosphere and soil moisture.

NASA is in the process of developing about 10 more missions centered on various aspects of information collection on Earth, she said.

"So, one of the things we want to do is make sure that we're building the most impactful systems for the future so we're all smarter 10 years from now than we are today," St. Germain said.

As a result, St. Germain said her division is working to take information from NASA space observations and integrate them into crop models.

NASA has observed what it calls an imbalance of energy coming into the Earth system and energy leaving, she said.

"So where does all that energy go?" St. Germain said. "It is mostly being absorbed by the oceans, over 90% of it is being absorbed in the oceans. That energy ... is getting transported all over the world by the ocean currents and that is changing our weather patterns. (That energy) in the system is what is intensifying the water cycle. As you all know -- better than most -- the water cycle is mostly the water that we need to live on our land originates in the oceans, and it gets delivered to us by the atmosphere."

St. Germain said the cycles intensify and "that's what's leading to more drought in some regions." So drier areas of the world are getting drier and wetter areas are getting wetter.

"That's creating a lot of challenges, particularly in agriculture," she said.

"So, looking to the future, how do we prepare for that? How do we ready ourselves as well as we can? So, understanding how this planet works and helping people make better decisions, informed science decisions, is really what we're about in earth science."

One example of NASA-developed technology includes the use of a pair of satellites to detect very small changes in the Earth's gravitational field. This allows the agency to track changes in shallow groundwater and root zone soil moisture levels.

"Producers are already adapting what they plant, where they plant it, how they manage, so it's not a predictive tool," she said. "But it is a projection tool that allows you to now start running if/then scenarios against what we think are going to be the growing conditions in the future. So again, this is a new tool that we've been developing with folks in the agriculture community to start testing these kinds of ideas."

"We want to make the Drought Monitor better because, as I like to say, someone's always on the wrong side of the line so we got to make sure the lines are as good as we can get it," he said.

"I feel a lot better about the accuracy myself when I know this stuff going into it. We've got to do a better job now bringing our existing line data models and assimilation systems into this realm. How fast can we get the data without a lag? If my data is four or five days old, I'm gonna already have an accuracy issue."

Svoboda said 2022 has been one of the most challenging years tracking drought since 2012.

"In years like this year that's a real challenge with about 50% of the lower 48 in drought. So, it's a pretty hectic year. Probably the last year like this, you'd have to go back to about 2012."

Hamilton County, Nebraska, farmer Brandon Hunnicutt, vice chairman of the Nebraska Corn Board, said farmers are always looking for the "next big thing" when it comes to enhancing yield. Especially when it comes to water availability and usage, Hunnicutt said producers could use tools capable of predicting or better tracking water resources.

"We obviously can control what seed we plant, the amount of fertilizer, what herbicides we're gonna use, etc.," he said. "But when it comes down to water, that's the key element that becomes the massive challenge."

Dating back to 1999, his farm was using handheld probes to monitor soil moisture and listening to the local radio station and "learned very quickly" that a lot of that wasn't accurate, he said.

"Being able to more accurately monitor the satellite imagery or satellite data we can say, okay, we don't need to turn on the pivot yet because we realized over the years we were way overwatering," Hunnicutt said.

"OK, now we're gonna start making some decisions and those become real decisions on whether it's water, whether it's fertilizer, whether it's a fungicide, whatever the case might be. But looking at it going, OK, what is it that we can do to impact the farm in a positive way? What is the next big thing to bring more value back to the farm?"

Jackson Stansell, CEO and founder of Sentinel Fertigation based in Lincoln, Nebraska, said NASA's work will help companies like his improve the way they help farmers get the most out of their crops.

Fertigation is the injection of fertilizers into an irrigation system, used for soil and water amendments and other water-soluble products.

Stansell said his company relies heavily on satellite imagery to help farmers schedule fertigation. The goal is to get beyond using a lot of the free imagery available publicly, to developing imagery that provides finer, more-accurate detail.

Farmers in Nebraska, he said, are beginning to adopt regenerative practices including no-till and cover crops. Stansell said farms are also starting to use biological fertilizers, which is "totally changing" how producers are doing nitrogen management.

"There's a lot of effort going into how do we quantify the impacts of these regenerative practices and kind of take us to the next step," he said.

"Another trend that we're seeing in agriculture right now, is that corporate buyers of agricultural goods are trying to encourage sustainable practices on the farm, as well as carbon markets and other ecosystem services markets that are offering alternative profit opportunities for farmers for quantifying the impacts that they're having through sustainable and regenerative practices."

Additionally, he said there's a willingness among farmers to engage in more intensive management of the farm to overcome "a lot of the risks that we're seeing from climate change, and also some of our production practices" during the past 40 to 50 years.

"For Sentinel, we're making decisions every single time that an image comes into our system," Stansell said.

"So, we're ingesting satellite imagery on a near day-to-day basis right now and making decisions that quickly and our farmers are actually looking at the platform every single day to see if there's something new that's coming across this system. Farmers want this data and they want it in real time." 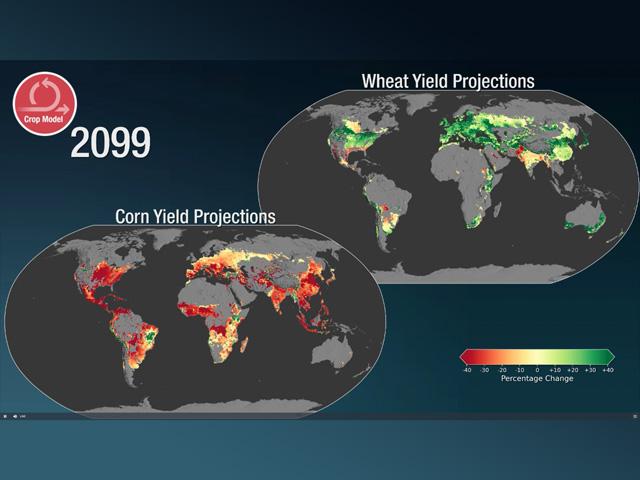