The following is a recap of fertilizer price trends and market developments for the month of July.

July was characterized by general nitrogen price increases due to spillover from continued developments in European natural gas prices. Conversely, we saw a large correction to UAN values following a negative vote from the U.S. International Trade Commission on adding levies to UAN imports from Russia and Trinidad, and the fill discounts which followed. Phosphate and potash markets continue to stall during a slow time of year for the two, alongside a slowdown in trader export demand.

Falling urea and UAN prices began to return to more typical price spreads in July, during a month where ammonia started to lose some of its previously outsized value with UAN price reductions for the summer-fill program. The month was slow to start over the Independence Day weekend but picked up afterward with the announcement of Q4 2022 prepay sales.

Prepay pricing came in $75 higher in Iowa at $900 per short ton (t) FOB (free-on-board, or sales price without transport costs) from Port Neal, compared to earlier summer fill volumes at $825. Factory offers in Oklahoma were at a range of $850-875/t, similarly higher from the initial summer fill as low as $800, and at $925/t in Beatrice, Nebraska.

Corn Belt offers elsewhere started at $900 CFR (cost-and-freight, or sales price with transportation fees included) for deliveries to states outside production areas. Prices then moved about $100/t higher, with deliveries estimated at around $1,000 CFR on the low end at the end of July.

We expect U.S. ammonia pricing to be firmer as the year goes on, owing to the ongoing natural gas crisis in Europe, which is raising the outlook for nitrogen prices overall.

Yara and Mosaic agreed on a price of $1,100 per metric ton (mt) CFR Tampa for August, up $140 on the $960 Tampa the two had agreed on for July. It perhaps goes without saying the main driver of the increase at Tampa is the recent development of gas and ammonia prices in Europe and subsequent pull on metric tons from Trinidad and the U.S. Gulf.

Due to the above-mentioned situation, the market in and around Europe remains firm. Black Sea ammonia continues to see little movement given conflict in the region, but derived prices indicate a range of $990 to $1,030/mt FOB -- up from June high price indications at $925. Baltic ammonia was similarly assessed higher from $940 to $980 FOB, also increasing by around $100.

There was availability in the Middle East for August loading, and there were reported to be export cargoes up for grabs in the United States, Brazil, and Southeast Asia where suppliers were fielding interest from western buyers.

Our short-term price outlook regarding global ammonia is firm in the Western Hemisphere while weaker in Asian markets.

World nitrogen prices firmed across the board in July and lifted urea values in the U.S. due to greater demand for exports to other countries.

NOLA urea barges were assessed from $465 to $585/t FOB at the end of July, up from high trades at $530 in June. Developments in the European natural gas crisis was the primary motivator in the U.S. as well as the rest of the global market.

River terminal urea barge offers are higher as well, with limited inland activity to report but with more interest possible later in the summer. Values ranged from $580 to $615 and climbing at the end of the month, while in June prices had only reached as high as $580.

Poor weather conditions for planting early in the spring have led to large amounts of carryover fertilizer volumes, which explains all the export activity in the U.S. Gulf over the past several weeks. As buying slows in August, we would expect some weakening due to the loss of any domestic urea demand, but rising world nitrogen prices could override the U.S. factors.

We see urea prices as volatile in the short term, with likely only world fundamentals to follow for the next couple of weeks.

Egyptian producers took advantage of soaring energy prices in Europe to make a flurry of sales at the end of July, which amounted to just over 100,000 t. Prices rallied back up to $765 FOB -- up from $725 to $763 in late June, and more importantly a staggering $100 increase week-over-week due to gas prices spiking on reduced supply from Russia.

Prices meanwhile softened in Brazil, where deals were heard down to $540 to $580/mt CFR and offers headed above $600 as buying interest picked up following the slow trade in July. June trades had previously ended the month at $660 before softening on inactivity as in much of the U.S.

The European crunch could have staying power and could result in a more prolonged run-up in prices. Increased demand is expected in the coming weeks when key buyers in Australia, Latin America and Southeast Asia return to the market, leaving our price outlook firmer for global urea.

The biggest news of July regarding UAN was the unexpected turn in trade policy on Monday, July 18, when the U.S. International Trade Commission voted against enacting countervailing and antidumping duties against UAN imports from Russia and Trinidad. Most in the market had expected the duties to be approved like in the earlier phosphates case. The negative vote currently means that Trinidad and Russian product can resume exporting to the U.S. largely unhindered.

After that announcement, CF Industries issued its first summer fill offers, which included $415/t Oklahoma plant, $420 Port Neal, $443 Cincinnati, and $435 St. Louis. Koch followed the CF announcement with offers from $410/t FCA at its Kansas plant in Dodge City. Previous river terminal offers in June had been ranging from $490-540/t FOB in the weeks leading up to the highly anticipated fill numbers.

Before these pivotal announcements, Nutrien had announced its own offers for Q3 2022 UAN early in July at $450/t FOB NOLA. Last year, Nutrien was also the first to issue its UAN summer fill program at $280/t FOB NOLA in late June 2021, before a flurry of production issues in September and further nitrogen price spikes pulled values higher.

NOLA UAN barges on the follow were assessed at a flat $400/t FOB, down from June highs of $580 prior to summer fill announcements. Initial summer fill offers reflected a $400/t FOB NOLA netback price, higher than some buyers Fertecon spoke to had hoped for.

While the potential exists for another round of fill buying now that most producers have pulled their offers, we predict the market will slow significantly in August as is typical, with UAN prices to remain stable to firmer in the short term. July saw a large correction to prices which now makes UAN much more competitive against urea and ammonia on a pound-per-unit-nitrogen basis.

Buying interest remains slow and out of season for phosphates, as usual, following the spring planting season and few in the market are expecting another broad summer-fill program before the fall buying period begins. Some have already layered and purchased a portion of their immediate phosphate needs, easily done from the readily available carryover supplies, while others ended the spring light-to-empty and have yet to re-enter the market for purchasing.

NOLA DAP barges were assessed from $755 to $760/t FOB in July, down from $820 in June in a sustained, quiet U.S. market, and with less support from traders looking to re-export phosphates compared to Q2 2022. MAP barges were also seen lower in July, down to $790 to $807/t FOB NOLA, compared to June levels which were as high as $845 on export loading demand.

Phosphate prices are expected to remain stable to softer into the late-summer months, with activity to remain slow until summer programs are released or until P&K interest picks up later in the year. Much of the July focus was centered on nitrogen, but August could see some buyers return to look for deals on refill volumes before the fall.

India has been just about the only show in town in the phosphates market in July and OCP took the market by surprise by dropping its price $20 despite the lack of Chinese competition that is typically associated with this time of year.

Offers for DAP in India have subsequently been cut to about $920 CFR as asking prices retreated in July -- flat month-over-month but with previously expected price increases curtailed by sinking sulfur prices. Meanwhile, Brazil remains on the sidelines and the European market is between seasons, causing prices to drift down in these quiet markets. MAP prices in the former ended July at $950/mt CFR -- $50 to $100 down from June prices due to sluggish demand.

The U.S. Court of International Trade last month held a public hearing on an appeal against countervailing/antidumping duties which were introduced last year against Moroccan-origin phosphates. Further news is expected in the case later this year as the appeal is still ongoing in the courts.

Our outlook regarding global phosphates pricing is consequently weaker in the short term as prices drift lower in quiet markets.

Nutrien released its highly anticipated summer fill offers at the end of July, after what had been a mostly quiet month with softening values on barges and terminal prices.

Nutrien announced initial pricing for Q3 delivery at $765/t FOB Midwest terminals and $735 NOLA barge reference. Offers were valid until Aug. 3, after which the company said it would close order books and raise the price of new sales by $35/t for Q4 delivery. Nutrien told Fertecon analysts it had "a good initial response to the program with customers optimistic about a strong fall application season."

Mosaic's potash offers were posted with similar terms at $760/t river warehouse and $765 inland for Q3 shipments, with offers intended to remain open until Aug. 3 as well, although the company clarified that prices are subject to change at any time.

NOLA potash barges were assessed from $705 to $715/t FOB, down from $770 to $780 in June as slower demand took its toll on prices for much of July. Terminal and warehouse interest had been picking up at the end of the month, however, with the major North American suppliers opening summer fill programs.

We expect August will treat potash similarly to our prediction for phosphates -- some limited fill buying on an individual basis ahead of fall when demand is expected to pick back up for some post-harvest applications. 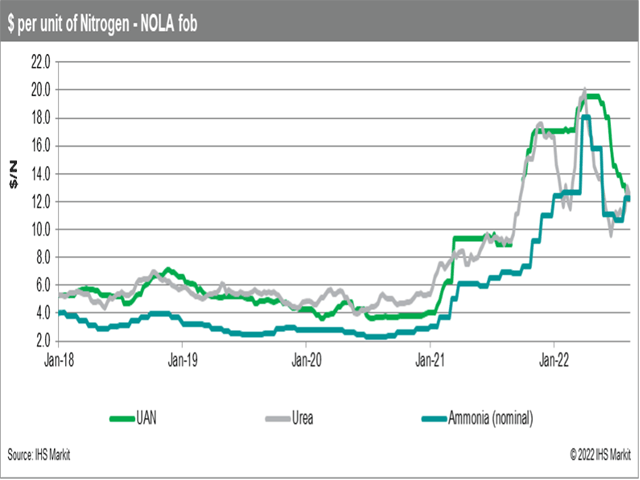