MT. JULIET, Tenn. (DTN) -- The third day of the DTN Digital Yield Tour, powered by Gro Intelligence, finds crops in Nebraska and Iowa that are hamstrung by drought, heat and hammered by hail. Less-volatile weather in Wisconsin means growers could have an average year.

On Wednesday, Aug. 10, Gro's models put corn yields in Iowa and Nebraska significantly below USDA's five-year average. Iowa farmers are expected to harvest an average of 180.4 bushels per acre (bpa), much less than average, which is 195 bpa. In Nebraska, the disparity is greater, with Gro estimating the average corn yield at 158 bpa compared to a 186-bpa average. Wisconsin is forecast to harvest 169.7 bpa, only 3 bpa below average.

"Both Nebraska and Iowa had a few pockets that, for different reasons, look pretty good," said Gro Intelligence Senior Analyst Will Osnato. "Nebraska with the irrigation and eastern Iowa with better rainfall. Then Wisconsin, it's not quite as hot, not quite as bad on the soil moisture, and therefore a bit better yields."

DTN Lead Analyst Todd Hultman said a theme is developing this season. "The best areas with the best conditions have good yields, but they're not eye-poppers. I mean, we're just not seeing that fantastic, record-breaking potential here."

On soybeans, Nebraska and Iowa had some of the larger deviations from average. In Nebraska, Gro forecasts an average yield of 52.5 bpa; Iowa, 55.9 bpa; and Wisconsin, 51.3 bpa.

"For the overall picture, conditions go from bad to "normal" from southwest to northeast through the three states," DTN Ag Meteorologist John Baranick said. "Nebraska is looking poor with heat and dryness, much of western and southern Iowa follow suit, but once we get into northeast Iowa into southern Wisconsin, conditions improve quite a bit with better rainfall and cooler temperatures during the course of the summer."

One of the key components of Gro's yield models is the normalized difference vegetation index, more commonly referred to as the NDVI, which measures the color of a crop from satellites and compares it to more than 20 years of historical data. Generally, a greener map reflects a healthier crop. You can see the NDVI map for Nebraska, Iowa and Wisconsin here: https://app.gro-intelligence.com/….

-- "In Nebraska, we have the biggest deviation from the five-year average" corn yield, Gro Intelligence Senior Analyst Mintak Joo said, adding that Nebraska showed some of the highest levels of distress in the Gro Drought Index of the states in the tour. Combined with high temperatures, Nebraska's state average yield is nearly 28 bpa lower than average.

"When we look at daily soil moisture starting in late June through most of July, the daily soil moisture number for Nebraska for the corn areas was among the lowest historically," Joo said. Irrigated areas along Interstate 80 are still pushing 200 bpa on average, but that's lower than previous years. Phelps County, which usually boasts the state's highest yields, is forecast to produce an average 209 bpa yield, almost 19 bpa less than last year.

-- "In Nebraska, conditions have been poor going back to last fall when drought started to creep into the state. With winter and spring being abnormally dry, drought has been the major player in the state's crop production this year. Though there have been periods of some good rainfall at times, that has come with bouts of severe weather," Baranick said.

"Where drought is still not indicated by the Drought Monitor in the southeastern quadrant of the state, this area was pummeled with hailstorms in June, which has likely contributed to some effect on the yield outlook. The heat has been the other negative factor, as temperatures have almost consistently been above normal all season long. Outside of a brief break in late July, temperatures in the 90s and nearing or exceeding 100 degrees Fahrenheit have occurred almost every day. There have been few areas that look good or decent in terms of the weather."

-- The key decision for at least one cornfield on the Zoerb Farm in central Nebraska's Sherman and Custer counties wasn't about a hybrid or fertilizer, a planting date or a seed density. It was about what the family decided not to do.

A blinding wall of crop-destroying hail swept through the region in June, pummeling the young corn right to the brink of a late replanting.

Surveying the damage, it appeared just enough plants had survived, and so the decision was made to stay with the crop, damage and all. There was also a freeze in May and a second, more minor, hailstorm came more recently that has put yet more stress on the crop. Examining the field recently to estimate the potential yield, Ethan Zoerb still wondered if standing by their stand was the right decision.

"I feel like Dad wishes he would have rolled the dice and tried to replant," Ethan said. "We had about 250 acres we did replant, and the stand is really good. However, those areas are just coming into tassel. It's the end of the first week of August, and we don't have the corn tasseled, so that will also be exciting, as our normal first frost day is the first week of October."

This past week, Zoerb took a yield check in that hailed-on (but not replanted) field and calculated 225 bushels to the acre. He's thinking the most recent hail event will take the total yield lower to 200 to 225 bushels per acre. The pea-sized hail stripped out some crop canopy, which will hurt final grain fill.

-- High temperatures and dry conditions throughout much of Iowa during the reproductive and ongoing grain-fill period has reduced yield expectations in the state, especially for corn that's currently projected to yield 15 bpa less than average.

"The eastern areas are a little better," said Gro Senior Analyst Jon Haines. "But generally, it's pretty bad in areas down in like southern Iowa. We're talking about 20% deviation from (recent averages)."

He continued, saying peak NDVI during the growing season is a really important indicator for yield. The index has dropped in early August in Iowa. "I did notice that in 2016, this similarly happened. It dropped off and then perked back up a little bit. So maybe that's what we have in store," Haines added.

With little to no rain in the forecast the next 10 days, Gro Senior Analyst Will Osnato is skeptical NDVI for Iowa will rebound anytime soon.

-- In Iowa, heat is a major contributing factor in decreased yield projections, especially across the south and west, according to Baranick.

"A hot and dry season has been a major negative, especially south of I-80 where temperatures again have been very high -- consistently in the 90s -- while the area has missed out on rainfall chances as fronts have moved through," Baranick said.

However, east-central and northeast Iowa do look pretty good yield-wise, DTN's ag meteorologist continued. "It's not as hot as farther south and west and benefiting more by increased precipitation. It is not surprising to see yields near or above normal in this section of the state, which follows a similar pattern in northern Illinois."

-- Dave Walton farms in east-central Iowa near Wilton. Based on conversations with growers in other parts of the state and nation -- Walton serves on the Iowa Soybean Association and American Soybean Association boards -- he said his region, along with much of northwest and central Illinois, is likely the "garden spot" for corn and soybean production this year.

In early June, Walton said conditions were dry, but timely rains since have benefited both crops. "It's been pretty ideal (weather-wise) recently. We're kind of sitting like Goldilocks right now," he said.

Despite a few days of extreme heat when corn was pollinating and soybeans were blooming, Walton said the crops persevered due to good soil moisture. He believes yield will exceed or come in at the top end of the farm's annual production history of about 245 bpa for corn and 65 bpa for soybeans.

"I've been out scouting cornfields for disease pressure and pulling ears," Walton said, noting plants are mostly in the dough stage. "We've got good pollination, good tip fill, and the population is there. I'd say this might be one of our better crops."

Soybeans are blooming on Walton's farm, with some pod development. "I'm seeing better blooming at each node. It also looks like there's more blooms per plant than I've seen in a while," he said.

-- Wisconsin corn and soybeans have benefited from cooler temperatures and more consistent rains, unlike Nebraska and much of Iowa. That's evident in Gro's yield estimates for Wisconsin, with soybeans currently exceeding the five-year average and corn near normal.

"Wisconsin soybean yields are kind of the star," said Joo. "It's one of the few (state) yields that is actually higher than the five-year average,"

Haines said the optimistic soybean yield estimates are based on relatively good weather as of late and the chance more rain will help the crop. Wisconsin corn yields, compared to other states, are also promising.

"In terms of all the other corn states, (Wisconsin has) one of the lowest changes so far from the five-year average," said Joo, referring to the difference between the current Gro corn yield estimates and USDA data. "When you look at our indicators (in determining yield) like daily soil moisture and temperatures, they're lower than what would be their averages. But they're not near anywhere what Iowa and Nebraska were in terms of being at the bottom of the range."

-- Wisconsin doesn't quite stand out in terms of dryness or heat like Iowa or Nebraska, according to Baranick. Fronts have routinely been bringing in cooler temperatures, especially across the northern half of the state. The southern part of Wisconsin has experienced higher temperatures, but also much more precipitation.

"Again, like northeast Iowa and northern Illinois, this is an area that has seen more favorable weather conditions," Baranick said. "Across the north, we are seeing much more limited rainfall and drought, but it's affecting less farmland and more forests. As a result, the state is standing out as being closer to normal production."

Baranick has traveled through northwest Wisconsin several times this summer. "The corn actually looks pretty decent despite some drought (conditions) ... and much better than last year."

He noted the southern end of the state got some good rainfall recently, which will help all crops, but probably help soybeans the most. 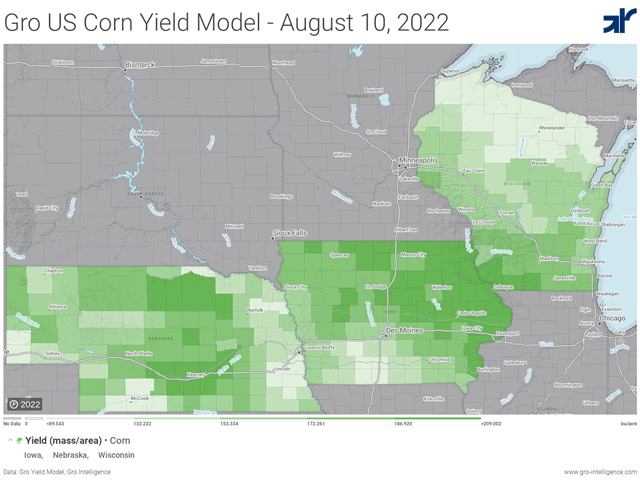