CHICAGO (DTN) -- With some extensive fanfare on Wednesday, Indigo Agriculture used the old Chicago Board of Trade pit as a conference hall to celebrate the company's first sale of carbon credits from farmers and Indigo's acceptance into the Climate Action Reserve registry.

Indigo Ag announced the sale of 19,000 carbon credits generated by the practices of 175 farmers who have been working with Indigo to sequester carbon in their operations. The credits were sold through a network of 17 buyers that include companies such as JP Morgan Chase, Blue Bottle Coffee and New Belgium Brewing, Indigo noted.

Other companies involved in carbon markets for agriculture have already rolled out announcements about selling credits and paying their farmer partners. Indigo leaders stressed the distinction between their program and others is Indigo's credits are the first agricultural carbon credits to meet the registration standard for the Climate Action Reserve registry, which lends credibility to the verification and quality of the science behind Indigo's credits.

A few details on Indigo's credits:

-- Each credit equates to 1 metric ton of carbon abated or sequestered by farmers.

-- Indigo's credits have now reached a sale point of $40 per carbon credit. Farmers would receive $30 per credit through Indigo's 75%-25% split with farmers.

Since its first enrollment with farmers, Indigo now has more than 2,000 farmers participating in its carbon program, involving more than 5 million acres. Those farmers will be eligible for the next rounds of sales that Indigo announces going forward.

Chris Lehe, an Indiana farmer, said he and his farm partner got involved with Indigo when a landlord wanted to see their crop fields converted to no-till. Lehe said he met with Indigo representatives at a winter meeting as he was looking at what it would take to switch farming practices.

While enrolling with Indigo has worked for Lehe, he noted he is involved with networks nationally with other farmers who initially had some bad first impressions with companies looking to enroll farmers in carbon programs.

"It really left a bad impression with a lot of farmers," he said. He added, "Indigo has made a lot of changes that have adjusted for farmers."

Lehe added that his carbon payment is almost $25,000, mainly by doing the data entry needed to qualify for conversion to no-till. His operation is not fully no-till, but he's looking for ways to expand that acreage.

"It's a great way to introduce a new revenue stream," Lehe said.

Tom Cannon, a farmer and rancher from Blackwell, Oklahoma, also said he was invited to be a farmer adviser for Indigo several years ago but also became frustrated with the company because it did not actually listen to the farmer advisers. He said that changed when Hovsepian became CEO.

"Because I'm an early adopter and I had done a lot of the things they additionally were looking for, I didn't qualify for a lot of it (carbon credits)," Cannon said. "And that was a complaint of a lot of early adopters, including mine."

As an adviser, Cannon said, he has "talked until he was blue in the face" about recognizing early adopters in carbon programs. But he said he recognizes companies want to see new efforts to reduce emissions, not count the carbon already in the soil from past work.

"It's kind of hard to count the stuff we already have in the soil and what we've already done," Cannon said. "Our benefits come from increased resiliency in our soil, increased production in our soil and lower inputs because we're early adopters."

Keith Paustian, a soil-science professor at Colorado State University, also highlighted carbon sequestration by agriculture as one way to lower emissions that does not demand new technology. Carbon sequestration on farms is a cost-effective option

"It's something we can do now. We don't have to wait," Paustian said. "We know the practices that will make a difference."

No-till planting and adding cover crops, or reducing fertilizer use with more precision applications also have co-benefits such as building resiliency in the soil and reducing water pollution, Paustian noted. "It's really something we should be doing" regardless of climate change, he said.

Agricultural carbon credits fall under "nature-based solutions" for corporations looking to buy credits to offset their own emissions. These nature-based credits are in high demand right now, said Jodi Manning, director of marketing for Cool Effect, which links corporations to carbon credit sellers. Those buyers, though, also want a verification process to be sure of what they are buying, she added.

Hovsepian said the value of agricultural carbon credits in the voluntary market will continue to rise as the decade progresses because companies have made hard commitments to lower their emissions by 2030. Hovsepian said forecasts project credits could reach prices as high as $140 a ton.

"This is our first crop, and it really is just the beginning of what we started," Hovsepian said, adding the carbon credits can create "a new valuable revenue stream for our farmers."

In an interview with DTN, Hovsepian said one of Indigo's challenges now is to better explain to executives in other industries the benefits of agricultural carbon credits.

"The impact that we can have on farming really needs to be explained," he said. "Corporate America really does appreciate that and wants to buy into that."

Indigo's celebration comes as both the environmental community and groups opposed to EPA regulatory oversight watch for the U.S. Supreme Court to rule on West Virginia's challenge to EPA's authority to regulate greenhouse emissions. The ruling could come as early as Thursday. Hovsepian said corporations committed to reducing emissions are watching the case, but it won't shut down their efforts.

Hovsepian said most of the efforts coming out of Washington, D.C., involve public-private partnerships in reducing emissions. The biggest issue with the regulatory piece is setting standards

"We do want standards set, but we want it a free market, and that's how we approach it," Hovsepian said. "I think that fits the government's view and our view as well."

One potential impact of the court ruling could be that companies looking for emission offsets will demand even higher standards to pay for them. Hovsepian said he believes that fits what Indigo already has been pursuing for agriculture.

"The industry that preceded us was forestry, and what we've seen in forestry is a rapid elevation of quality standards," Hovsepian said. "They actually looked back at old forestry credits and revisit their quality levels. They actually saw the prices quadruple in that space once they did that."

Another aspect Hovsepian said needs to be better explained to farmers is that carbon credits can be an annuity for them. Once a baseline is set for the farm's sequestration metrics, every improvement or change in practice can lead to a carbon benefit.

"After that, we keep paying on that journey as we more practice changes," Hovsepian said. "And we're looking at doing that for the next 15 to 20 years with farmers."

Hovsepian also cited a recent United Nations climate report pointing to the need for countries to accelerate the reduction of greenhouse emissions by 34 billion tons by 2030. He said agriculture has the capability of reducing emissions and sequestering as much as 5 billion tons by that time.

"The science is now telling us if we continue on our current trajectories, we will meet catastrophe," Hovsepian said. 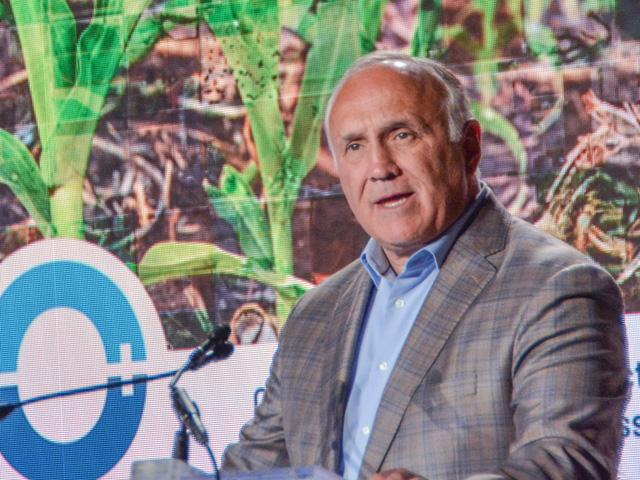